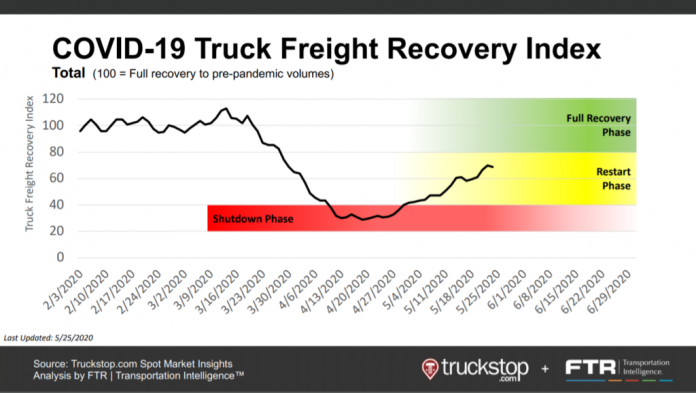 TORONTO, Ont. – The worst of trucking conditions wrought by
the Covid-19 pandemic may be in the rearview mirror, but the recovery could be
choppy.

In its most recent Commercial Vehicle Dealer Digest,
ACT Research predicts the economy will transition from contraction to growth
over the third and fourth quarters, as the focus shifts from saving lives, to
saving livelihoods.

“Clearly
the global economy does not have the luxury of waiting a year or two for a
vaccine to be developed before the current solution itself becomes the greater
risk,” said Kenny Vieth, ACT’s president and senior analyst. However, the
economy won’t rebound to pre-Covid levels overnight.

“Our forecast anticipates that the U.S. economy, as defined
by GDP, will not return to its Q4 2019 size until after 2021,” Vieth added.

“In
the supply chains that support complex OEM-level assembly operations, from raw
materials to finished goods, it is not just about opening one plant, but
opening thousands of plants simultaneously, making tens of thousands of parts
that go into those assemblies in an orchestrated fashion, all with new layers
of safety and testing protocols in place. It is one thing for the
automotive/commercial/off-road industries to get supply chains up and running,
it is another entirely to get buyers to market when the economy has so recently
cratered and going outside poses an existential risk.”

A case in point is Ford, which quickly halted production at
its Kansas City Ford Transit assembly plant after a worker tested positive for
Covid-19. This after a Chicago plant was similarly shut down suddenly after
production resumed there.

David Leggett, automotive analyst for data and analytics
firm GlobalData, said “Vehicle makers across the world are facing similar
issues as they restart manufacturing facilities that were shuttered during Covid-19
lockdowns. One obvious problem is that even while first wave of Covid-19
infection peaks have been passed, the Covid-19 pandemic is far from over and
fresh outbreaks can disrupt activity.

GlobalData anticipates the hit to the global automotive
market this year will be greater than during the 2008-2008 financial crisis.

Industry analyst FTR reports the truck freight recovery is
well into the “restart phase” but overally volumes are still well below normal
levels. “The trucking market is moving up in a slow, stair-step manner,” FTR
reported.

The week ending May 22, week 20 of the year, recorded the fifth
straight week of increasing spot market volumes, according to FTR and Truckstop.com.
Weekly growth ranged from 10% to 20%, with week 20 volumes up 10.1% over the
previous week.

More encouraging, rates saw their largest increase in four
weeks since a major drop in April. Dry van and flatbed rates were up about 9-10
cents per mile, while reefer rates rose 12 cents.

Still, dry van rates remained nearly 25 cents per
mile below their five-year average and volumes were about 82% of the five-year
average for week 20, and about 92% of the volume seen the same period in 2019.

Avery Vise, FTR’s vice-president of trucking,
said during a weekly Trucking Market Update podcast May 22, that “We are seeing
an uneven recovery, where freight volumes are recovering in a series of
plateaus.”

In Canada, TransCore Link Logistics saw overall load volumes on its Loadlink board plummet 56% in April, but it believes the market has bottomed, representing “absolute bottom levels of freight during this period of decline.”

A newly launched Commercial Mobility Recovery Dashboard, produced by Webfleet Solutions and Geotab, showed commercial transport activity is recovering. It draws on data from more than 3 million connected vehicles around the world.

The dashboard
indicates North American commercial vehicle activity dropped 20% at its lowest
point since the Covid-19 pandemic, but has recovered to 90% of pre-Covid
levels. Commercial vehicle activity rose 2.2% between May 11-20, excluding
weekends and holidays. Since the beginning of May, fleet activity within the
construction and freight transportation industries was operating at or above
the pre-pandemic baseline in Canada, the companies revealed.

The dashboard can be found here.

Millennials to the rescue?

ACT Research said there’s a case to be made for a strong economic
recovery, due to the structurally sound underlying pre-Covid economy and strong
government stimulus.

“We believe that the maturing millennials will be the key to
pushing the economy forward as they resume their transition to marriage, kids,
and mortgages,” said Vieth.

He said he remains cautiously optimistic that there’s an end
in sight to the economic damage incurred due to the pandemic.

“Our
best guess is that the third quarter of this year will mark a transition, with
a gradual and slow recovery commencing late in that quarter or in the fourth,
followed by a pickup in momentum into 2021,” Vieth said.