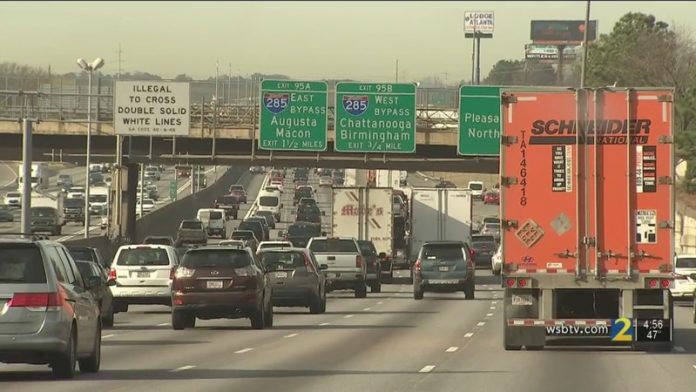 Atlanta traffic has seemingly gone from a stormy sea to a stagnant pond. The keyword here is “seemingly.” A stagnant pond implies calm and predictability, and while normal rush-hour delays have disappeared, crashes have not. When and where crashes occur are far less predictable than the normal 7 a.m. slow zone on I-85/southbound in Gwinnett. With unexpected delays on what are now normally wide open roads come even worse crashes. Our commutes these days are both very calm (most of the time) and jarringly volatile.

» RELATED: Another case of the burnouts — and this stunt is worse

Volatile is definitely the adjective of choice for the freight industry. Tractor trailers are ubiquitous and especially in Atlanta, where so much commerce converges. The Port of Savannah means even more goods traverse Georgia, and Metro Atlanta seems to be between nearly every point A and B in the south.

Up until the COVID-19 shutdowns of mid-March, the freight industry had a shortage of drivers. Consumer demand in the robust economy meant pipelines needed filling. The week of March 9 saw the sudden closing of schools, sports, and many public places. With people scrambling to stock up on supplies, preparing to shelter in place, lines at grocery stores resembled rush hour on I-285. Store shelves looked “snowstorm empty” for some items. And the trucking industry scrambled to meet grocer and box store demand.

TruckersReport, a “a network of professional truck drivers connected by our trucking industry forum, which provides an independent community for drivers to share information and assist each other’s careers,” as their website says, chronicled this well.

“Freight volumes and rates have been incredibly volatile since the end of February. But by the end of March, monthly averages were actually looking pretty good in some segments of the industry,” Samuel Barradas wrote on TruckersReport.com. But now that people have settled into the new, homebound normal and even more retailers and restaurants have closed, trucking is on the other end of the curve.

“For a short time, there was a really big pick-up in trucking,” longtime Atlanta truck driver Herschel Evans said on the WSB Traffic Podcast

“If you’re one of the carriers that is supplying the big-box stores” — in other words, the stores that are still open, Evans explained — “they’re moving pretty well full speed. But, you take into account that the automotive manufacturers have shut down. Practically all of the suppliers that supply them have shut down. A lot of other factories have closed. A ton of small businesses, small shops, schools, and with them comes a complete stoppage of all the items they use.”

Evans and his cohorts aren’t dealing with shifting loads stifling their long trips — they’re dealing with lighter ones.

Barradas wrote that truck volumes have decreased significantly in the past couple of weeks. By one measure, there has been a 39% decrease in loads. And that decrease is mainly due to a sudden plunge in the spot market, or things that get ordered and delivered immediately. With retailers not moving, say, clothes and electronics, there isn’t a need to restock shelves. With bars shuttered and restaurants operating in takeout “safe mode,” the demand for food and alcohol refills has cratered.

This all means that operators, ranging from large fleets to independent owners of single trucks, are having to make the same hard decisions that other businesses are. A large company keeping every driver fully employed makes little business sense when demand is lower. And paying for fuel, wear and tear, and a driver for trailers only partially full also becomes a losing proposition.

“If trucking is booming, if items are being moved, then you can bet the U.S. economy is doing the same,” Evans said. But Evans said this correlation, of course, works in the other direction. And while some metrics have trended up nationwide in the past week, the economy is definitely in a shock and likely will take longer to recover than many think.

Evans said that Atlanta truck stops often are still full, however. But that is because truckers now no longer try to avoid the usually jammed city roads. And there are far fewer 24-hours-open options in rural areas, meaning emptier rural truck stops are the real barometer for the freight industry’s health.

In those areas, there are far fewer dining options available these days, and stores like Walmart may close at 8:30. That leaves the remaining truckers on the roads with fewer options for rest and nourishment. As we all know, this economic downturn has a huge ripple effect.

Akin to our favorite breweries and meat-and-threes, we want the trucking industry there for us at the end of this pandemic tunnel. And even more than the former, we need the freight industry to remain viable right now to deliver essential groceries, cleaning supplies, and medical equipment nationwide.

Any time we make erratic moves behind the wheel near big rigs, they have less time to react and they can crash big. The cost of doing so is much more now in their economically unpredictable industry.

So if we see a truck driver on the roads, tip the cap to them or pick up their convenience store tab, if you can. What has seemed like a booming sector of the economy actually is not, and suddenly drivers and operators alike are feeling the same stress as many of us are.

Doug Turnbull, the PM drive Skycopter anchor for Triple Team Traffic on 95.5 WSB, is the Gridlock Guy. He also writes a traffic blog and hosts a podcast with Smilin’ Mark McKay on wsbradio.com. Contact him at Doug.Turnbull@cmg.com .

Doug Turnbull, the PM drive Skycopter anchor for Triple Team Traffic on 95.5 WSB, is the Gridlock Guy. He also writes a traffic blog and hosts a podcast with Smilin’ Mark McKay on wsbradio.com. Contact him at Doug.Turnbull@cmg.com.

The Isuzu D-Max Arctic Trucks AT35 is off-road overkill