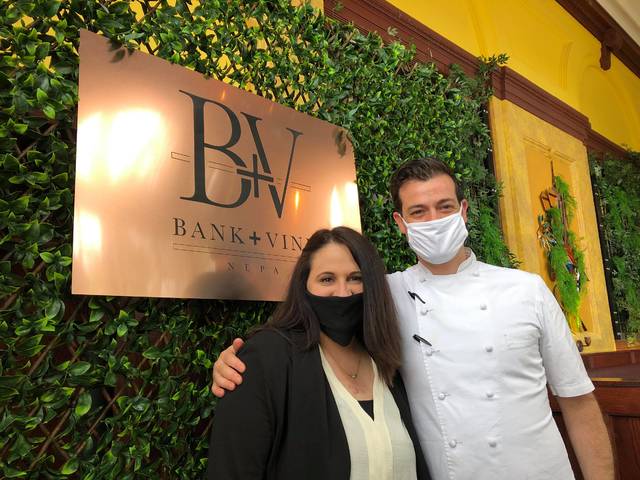 WILKES-BARRE — A historic downtown eatery is getting back to its roots in more ways than one.

Friedman Hospitality Group has transformed Le Manhattan Bistro, a French restaurant which had been operating in a vintage bank building at South Main and Ross streets, into Bank+Vine, a farm-to-table concept with updated menu, decor and management.

Bank+Vine is under the stewardship of General Manager Erin Crofchick and Executive Chef Chad Gelso, with Ryan Dimmick as bar manager.

Each is an area native who learned their trades in bigger markets but who have returned to the Wyoming Valley, putting their skills to work at this new venture.

Diners, meanwhile, can expect fresh, seasonal food — in many cases drawn from local farmers and purveyors.

“You go to the cities because that’s where the jobs are and that’s where the money’s at. But there’s a big disconnect because you get all your deliveries off the back of a truck,” Gelso said of his experience working in large metro areas.

“Here? In about two hours we’re going to take a walk to the farmers market and have a face-to-face with the farmers. There’s just much more of a connection,” he added during an interview last Thursday, the day before Bank+Vine held a soft-opening followed by its first public dinner service on Saturday and Sunday.

The debut menu includes raw items, such as oysters; small plates with an emphasis on vegetables and produce; large plates including salmon, grilled chicken, roast lamb and duck confit; as well as larger signature items such as a 28-ounce bone-in ribeye.

“The menu is designed to be a nod to the area’s agricultural past. I think the area is ready for it because you have these amazing farmers and growers,” Gelso said. “The focus is on how we prepare dishes simply and respectfully?”

For example, the fennel confit “is about fennel. it’s not about 10 different ingredients,” he said. “The tomato salad? We use the best heirloom tomatoes we can find, dressed in their own juices.”

That philosophy extends to libations.

“All of the cocktails and wines have been chosen to pair with certain dishes. All of the bar juices are fresh-pressed. Everything is fresh,” Crofchick said.

“Ryan Dimmick is a level one sommelier, he knows his stuff,” Gelso added. “The cocktails that he is doing are seasonal. It’s 95 degrees out now. What’s light? What’s acidic? What will cool you down and get you ready for the meal?”

Of course, finding some items does mean looking farther afield, but Gelso said Bank+Vine looks for the best.

“We have some amazing vendors of purveyors pulling us cattle out of the Midwest — all grassfed, aged beef, happy cows,” he said. “It’s getting back not just to what we eat but what we eat eats.”

Diners who visited Le Manhattan will find much of its French-themed decor has been replaced by vines, brassy accents and also historic images that reflect the building’s original use as a bank.

“We really wanted people to walk in and see the difference,” Crofchick said.

It’s more casual now: No white tablecloths, and Beatles music will add to the vibe.

The COVID-19 era means diners will see some other differences, too.

In order to meet state mandates, there’s no drinking at the bar right now, and the inside seats have been spread out to meet the 25% maximum occupancy requirement. In such a spacious setting that is not hard, Crofchick added, and the restaurant will be adding sidewalk seating on South Main and Ross streets, as well as an intimate garden canopy for four tables behind the restaurant.

“We really are blessed with the space,” Gelso added.

And, as the Times Leader has previously reported, restaurateur Rob Friedman has installed air scrubbers in his properties around the region. The device that goes into the HVAC system and destroys 99 percent of all surface and airborne germs and contaminants.

Crofchick said the staff will carefully monitor seating capacity during dining hours and also will offer contactless menus for those who prefer them.

Right now, the restaurant will be open Tuesday through Sunday for dinner, although Bank+Vine is aiming to bring back Sunday brunch in the near future.

“We want people brunching. Anything people could ever want, and lots alcohol,” Gelso said.

“We’re bringing back the buckets of bubbles. That was one thing that we heard from past guests. They want the bubbles back for Sundays,” Crofchick added.

As notes, Bank+Vine plays into individual homecoming stories for Crofchick and Gelso.

Crofchick grew up in the Mountain Top area and graduated from the former Bishop Hoban High School. She went on to attend Marywood University, and after college got into the hospitality and events business in Philadelphia.

“Then COVID hit andeverything was so uncertain, and I moved home,” she said.

“Rob reached out looking to find a position for me within his company,” she said of Friedman. “It’s been a really great experience so far.”

Gelso, meanwhile, comes from a family with roots in Pittston, Shavertown and Dallas.

He set out early to see the world.

He studied at the New England Culinary Institute in Vermont, then headed to old England where he worked under chef Marco Pierre White in Hertfordshire.

“And then I bounced around to find the best restaurants I could find,” Gelso said, “putting in a lot of hours, soaking it all up.”

Gelso most recently worked as the head chef at Suraya in Philadelphia.

“Certainly COVID was an influence for me in coming back, but it’s also about getting back to our roots — our farming roots and our family roots and bringing it all home,” he said.