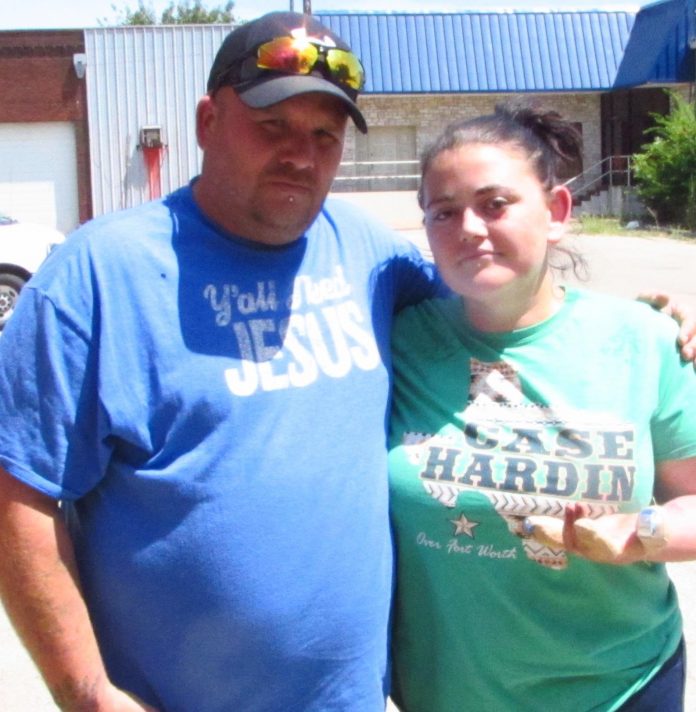 Kimberly Allen’s funeral will be Saturday at a Hamilton funeral home, 20 days after the 28-year-old Brownwood woman lost her life in a suspected drunken-driving wreck.

Allen was among a group in a front yard at Southside and Slayden in south Brownwood on the evening of June 28 when a Ford F-150 pickup approached from the south, heading north on Southside, Brownwood police have said. The truck left the road, entered the yard and struck Allen and three others, two of them children.

Allen and the others were unloading furniture from a trailer when the wreck happened, police have said.

Allen died at the scene.

Police said the driver of the pickup, Margaret Harper, 38, was arrested on one charge of intoxication manslaughter and three charges of intoxication assault. Harper is free on bonds totaling $252,500.

The wreck happened in front of the home where Erica Richardson, 32, and her husband, Robert, 43, live with their children. Erica Richardson, the other adult who was struck by the truck, was flown to Parkland Parkland Memorial Hospital in Dallas with injuries including damage to her left hand and fingers.

“All I can do is replay that moment in my head,” Erica Richardson said. “It’s like a movie reel. It just plays in your head repeatedly. We’re grown, and it’s hard for us to deal with. But our babies  are having a hard, hard time with this. They cry at an ambulance. They cry at a car revving up.”

Robert Richardson was sitting in his car talking on his phone when the wreck happened, and he saw everything.

“Our world was flipped upside down that day,” Robert said.

Robert and Erica Richardson said they were good friends with Allen. “She was the sweetest person you would ever meet,” Erica said of her friend. “She was getting to know God.”

In an earlier interview, Allen’s mother, Crystena Schneider, said Allen had a heart condition that prevented her from working and driving, and sometimes caused her to pass out.

“We’ve known her for years,” Robert Richardson said. “She kind of disappeared for a little bit. For the past four months she started coming around and we were really getting to know the real Kimberly.

“She struggled to fix her life and she had everything going for her and we were really proud of her. If you ever met Kim, she’s got a heart of gold and you would never, never forget her. She’s just a person that if you ever came in contact with her, you would just love her personality and just everything about her.”

The Sunday the wreck happened, the Richardsons picked up Allen and they drove to Coleman. The Richardsons bought furniture at an estate sale, loaded it onto their trailer and drove it back to their Brownwood home.

“We were unloading the trailer, looking at everything we had just got,” Robert Richardson said. “We saw a truck lose control and we thought it had just lost control going around the corner.”

When the truck entered the yard, Erica Richardson screamed at the children to move. She doesn’t recall what happened next, but she related what she’s been told.

“From what I was told, I was holding my 5-year-old trying to get out of the way. And that’s when the truck hit us and the 5-year-old went flying. I guess I pushed my 8-year-old and I ran with my 5-year-old.

“They told me that I was able to push (Baylee) out of the way in time. She did get cuts but luckily she didn’t get really hurt. But I was holding Mason because I thought I could run with Mason and I just didn’t make it in time. The truck hit us.”

Robert Richardson described what he saw as he sat in his car and talked on a phone.

“Furniture just started flying,” Robert said. “It all happened right in front of me, and I couldn’t get out of the car in time to save anybody because it all happened so fast. I saw everybody get hit.

“I saw Kimberly go under the truck. She got drug. She came out the back and it kicked her up in the air. She went kind of like a somersault, and landed and hit the ground.”

Robert and Erica rushed to Allen’s side and pleaded with her to live. Robert waved his hand in front of Allen’s eyes, hoping to show her that her friends were there.

“I was over Kim begging Kim just to hang on,” Erica recalled.

Multiple sirens wailed through the neighborhood as police, firefighters and Lifeguard Ambulance arrived. Erica Richardson heard someone say Allen had a pulse. But then she learned that Allen had died on the scene.

“My kids are all traumatized from it,” Erica said. “My 8-year-old, she’s very, very traumatized. She saw everybody get run over. She said ‘mom, I tried to save Kim. The 5-year-old will tell me I wish it had never happened. She’ll tell the ‘the truck hurt me.’”

Richard Robertson said he feels guilt because he wishes he’d been out of the car when the wreck happened. “Maybe I could have pushed her out of the way, pushed Macyn or somebody out of the way,” Richard said. “Because I’m a big boy and I can take a hit. So that’s something that I have to live with and I have to overcome.”

Visitation for Allen will be from 3 p.m. to 8 p.m. Friday at the Riley Funeral Home in Hamilton. Her Funeral will be at 11 a.m. Saturday at the funeral home, with burial in Gentrys Mill Cemetery.