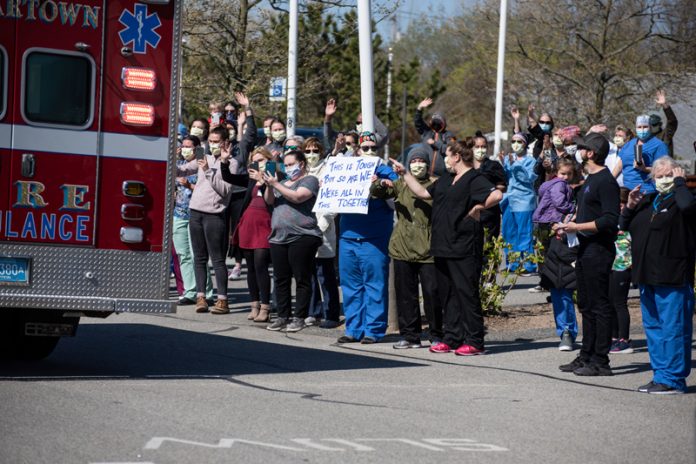 A parade honoring frontline workers on Martha’s Vineyard snaked around the Island to thank medical personnel, grocery store workers, and many others for their dedicated service during the COVID-19 pandemic.

Parade vehicles staged at the Edgartown School. The parade was expected to begin at 2:30 but was delayed briefly because Edgartown and West Tisbury firefighters rushed off to fight a brush fire off Metcalf Drive in Edgartown. By 2:50 pm, the parade started to roll through Edgartown, past Sheriff Robert Ogden and an honor guard in front of the Dukes County Jail and by Stop & Shop, where dozens of workers stood near Upper Main Street and smiled behind their masks as they waved.

West Tisbury Fire Lieutenant Brynn Schaffner, who helped fight the brushfire, said he was “pleasantly surprised they delayed the parade for us.”

Maggie O’Mara, a Stop & Shop worker in Edgartown, said she is thankful for the kindness of the Vineyard community.

“It makes you proud to live here, and it keeps me doing what I am doing,” O’Mara said.

She called the Vineyard a “tight-knit community” and said that she has seen innumerable acts of kindness in the store, including folks paying for strangers’ groceries.

“It feels so special to be honored like this. Everyone has been so nice during this difficult time. My customers sometimes even give me masks that they made themselves,” O’Mara said. “It’s just a really amazing place to live.”

The parade then drove up Edgartown-Vineyard Haven Road to Martha’s Vineyard Community Services to honor and thank them for continuing to provide their essential services during the pandemic.

There, a family stood on the side of the road near the Martha’s Vineyard Regional High School and the kids waved excitedly at the honking police cars as they entered the community services lot.

After wheeling out pask the MV Ice Arena, the parade went through the round-a-bout and headed down Barnes Road headed into downtown Oak Bluffs to Reliable Market. Outside, the owners of Reliable were standing and waving as the huge emergency vehicles flashed their lights and blared their sirens. U.S. Postal workers also took a moment to wave and clap as the parade passed the Oak Bluffs Post Office.

From there, parade vehicles drove past the Oak Bluffs VFW Hall where Chef Deon waved from the front step of his restaurant.

By far, the greatest turnout was at Martha’s Vineyard Hospital, where scores of doctors, nurses, and community members stood with masked faces as the procession looped around the hospital campus.

In front of the entrance tent of the hospital, one emergency responder came over the loudspeaker of one of the trucks and shouted “thank you so much Martha’s Vineyard Hospital, you are all heroes!”

A group of medical staff were standing at the side of the tent holding a sign that said: “This is tough, but so are we. We are in this together.”

Betsy VanLandingham stood by and waved as the parade went by. VanLandingham said it means a lot to her that the community is so supportive of hospital workers. But she said it is especially meaningful that other frontline workers — firemen and police officers — took the time to thank them personally.

“I think it means a lot to everyone that has to work on the frontline. I’m happy I had the day today to see this,” VanLandingham said.

The parade crossed the Lagoon Pond Bridge into Vineyard Haven and turned through Five Corners to Stop & Shop. Grocery workers at the entrance to Shop & Shop got the parade coming and going as it went up Water Street and back again. Steamship Authority workers also came out to cheer and be cheered.

The parade motored up State Road to where Vineyard Grocer, Cronig’s Down-Island Market and Vineyard Medical Care are in close proximity and hit folks on both sides of the street with barrages of horns and sirens. From there, the parade cruised to West Tisbury and drove past Conroy’s Apothecary before winding down.

“It was great all around,” Lt. Schaffner said. He said he was moved by the signs he saw on the roadside. “They were thanking us when the object was to thank them,” he said.