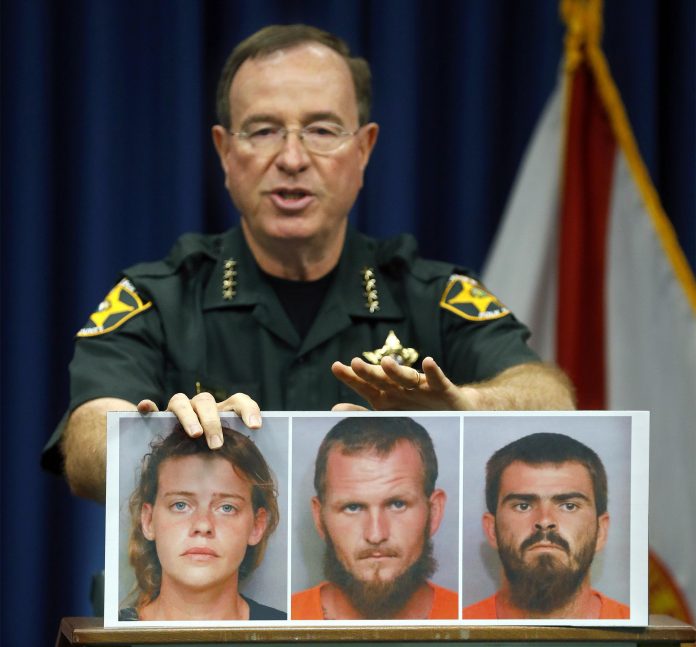 BARTOW — A chance meeting at a dollar store in Frostproof last Friday night led to the shooting deaths minutes later of three friends who’d met to go fishing and the arrest of a Lake Wales man for the killings, Polk County Sheriff Grady Judd said Wednesday.

Investigators have linked a shell casing found at the scene to a handgun discovered at Wiggins’ camper on Monday. Detectives have been told it was dismantled and thrown away, Judd said.

Detectives also have found trace evidence of blood in the truck in which Wiggins was riding, and it’s being processed.

Preliminary investigation reveals that Wiggins, in the moments before he allegedly opened fire, had accused Springfield, a mechanic, of selling the engine from his truck.

“For that, this guy massacres three young men, 23, 27 and 30, on their way to fishing on a Friday night in Frostproof?” Judd said while displaying Wiggins’ photo during Wednesday’s press conference. “It’s gut-wrenching. This is evil in the flesh.”

Judd wouldn’t disclose the source of their information, but provided this account of how the shootings unfolded:

Investigators found a bag in Tillman’s truck containing a purchase that night from a Dollar General store in Frostproof. Surveillance video showed Tillman in line to check out a few minutes before 10 p.m., and Wiggins and his brother, William “Robert,” 21, were in line behind him. Robert Wiggins overheard Tillman tell the clerk that he was meeting Springfield to do some fishing, and the younger Wiggins told his brother what he had heard.

By that time, the three friends had met on Lake Streety Road, with Tillman in his truck and Springfield and Rollins in another. They were parked together, still in their trucks, and talking, Judd said.

Then Wiggins pulls up behind Springfield’s truck.

“T.J. exited his truck, and when he did, Brandon got out of his vehicle and shined a light back to see who was pulling up behind them,” he said. “When he did, T.J. rushed up to Brandon and pushed him against the truck, pulled the handgun out and said ‘Where’s Keven?’ “

He sees Springfield, and gets between the two trucks and points the gun at Springfield.

Wiggins then accused Springfield, who’s a mechanic, of selling the engine out of his truck, he said, and Springfield responded that he didn’t know what Wiggins was talking about.

Preliminary investigation indicates he fired nine to 10 shots at Springfield and Rollins.

“Then he turns on Damion and begins to shoot Damion, who’s got his door open, in his truck several times,” Judd said.

At that point, Wiggins realized he’s dropped the magazine from his handgun, which held the bullets, Judd said. He opens the truck door and Springfield falls onto the ground, which is where his body was found. Wiggins then tells his brother to help put Tillman in the back of one of the trucks, and he did.

After leaving the scene, the Wiggins brothers and Mary Whittemore, 27, who was in the truck when the three men were shot, drove to a McDonald’s restaurant in Lake Wales, ordering 10 double cheeseburgers and two McChickens.

“While they’re standing in line, or in line at the drive-thru, it’s very quiet,” Judd said. “T.J. simply says, ‘We weren’t there,’ and that’s all the conversation they will admit to. We believe there’s more than that.”

Detectives were told that Robert Wiggins took the borrowed truck they had used that night and cleaned it out.

Robert Wiggins and Whittemore, identified as T.J. Wiggins’ girlfriend by Judd, each have been arrested and charged with three counts of accessory to murder and one count of tampering with evidence.

T.J. Wiggins, a convicted felon, was arrested Monday after detectives executed a search warrant on his travel trailer and discovered a cache of firearms.

Initial interviews with each of the suspects brought conflicting stories about the night of the murders, Judd said, although they admitted to being in the truck at Lake Streety Road.

At 10:09 p.m. that night, Rollins called his father to say he needed help. Judd said Wednesday it’s believed he called before the shooting began. By the time Cyril Rollins got there, his son was critically wounded, and after talking with him for moments, the elder Rollins left to call for help because he had left his cellphone at home.

Judd said some have questioned why Rollins didn’t use his son’s cellphone.

“His son’s phone had fallen down inside the truck,” he said, “and in his panic and fear, he didn’t see any cellphones. He just knew the three boys, and his son, were shot to pieces and he ran for help, which was all he needed to do.”

Two Bicyclists Killed In Separate Incidents In The Bronx