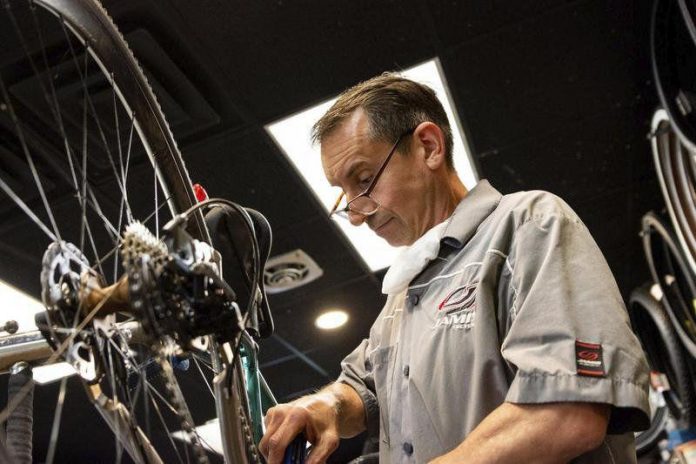 But none of them are for sale. They are either already sold, or are completed repair jobs waiting for their owners to retrieve them.

And he’s not unique in the marketplace — Kavulla’s Bicycle Shop mirrors a national trend of consumers clamoring to pedal during this cycling season.

“When a delivery truck shows up with new bikes they’ve already been sold,’’ Kavulla said. “We’ve been told by our suppliers things will be getting better in July.’’

He credits the voracious demand for bikes to people enduring the COVID-19 lockdown. Now that people are getting out of their houses, he said, they want to engage in activities that allow for social distancing and offer opportunities to get active after two months of pandemic-enforced sedentary lifestyles.

Bicycling is ideal on both counts.

This isn’t just a case of people demanding new bikes.

“We’ve been getting a lot of bikes that people have been hanging in their garage for 20 years,’’ Kavulla said. “They want them repaired and fixed up so they can ride them.’’

That leaves bike sellers pinched, and not just for new bicycles.

“That’s why even used bikes are hard to get,’’ he said.

Kavulla’s shop offers a variety of products from small bicycles with training wheels for youngsters to 20-plus speed ultralight bicycles for the more avid riders.

Super-fast road bikes used in races like the Tour de France draws “oohs” and “aahs.” But they aren’t always the best sellers for the general public.

“A lot of people are intimidated by bikes with gears,’’ Kavulla said.

Count Sharon resident Art Scarmack among the hardcore cyclists. The retired Sharon firefighter took up the sport 41 years ago. In a typical year, he bikes between 3,000 and 4,000 miles. His mind-boggling best year — when he rode 6,000 miles — would be a trip from coast to coast and back with miles to spare.

“I used to run and cycle,’’ Scarmack said. “But running really began hurting my knees so I transitioned into just biking. It’s easier on the joints and everything else. ‘‘

He quickly noticed a financial difference between the two sports.

“For running all you need are shoes and a pair of shorts,’’ he said.

“You can invest a lot more in bicycles.’’

Bikes listed for sale on the internet covers a wide price spectrum.

Those with deep pockets can get custom-made bikes that can cost $20,000 and up. But Scarmack recommends starting out with a cheaper bike.

“If you find that you like cycling then you can get a better one,’’ he said.

Also, he strongly advises cycling newbies to start off easy by using bike trails and roads with little traffic.

“Cycling isn’t cut out for everyone,’’ Scarmack said.

And there are risks in biking. Scarmack said he’s been hit three times by cars while traveling area roads but wasn’t severely hurt.

“Several times I’ve had people roll down the window of their cars and throw pop and beer cans at me,’’ he said.

His advice in avoiding these situations, “There’s safety in numbers,’’ Scarmack said. “Ride with a group.’’

Helmets are a requirement, say bike sellers and riders alike. But after that, there is a wide range of accessories, including designer bike jerseys, gear-shifting gloves and blinking lights for better visibility.

David Dale, a retired photographer, has been cycling for over 40 years. Dale strongly recommends riding with a small repair kit that can be tucked under the seat.

“I’ve gotten a lot of flat tires over the years and repair kits sure have come in handy,’’ he said.

And people hungering to get outdoors aren’t grabbing only bicycles.

Consumers were snapping up kayaks even before COVID-19, but now it’s off the charts, said Casey Shilling, owner of Carried Away Outfitters.

The outdoor retail business has stores in Greenville and Shenango Township in Crawford County.

“Kayaks are being described as the new toilet paper,’’ Shilling, said. “Everyone is going out to buy them.’’

And the hottest line of kayaks combines boating with another activity.

“Fishing kayaks are the fastest growing segment in kayaking right now,’’ he said. “It has really hit our area.’’

Designed for anglers, these kayaks have seats that sit up higher, which allows the paddler better lines of sight. Top-of-the-line versions offer a small motor with a propeller.

Shilling credits multiple factors in the fevered demand for kayaks.

“People have been cooped up indoors for months and want to get outside,’’ he said. “And now they have that stimulus check from the government.’’

But there’s another reason – something deeper, Shilling said.

“COVID-19 scared people and has reminded everyone how life is so short,’’ he said. “They need to get out and live.’’