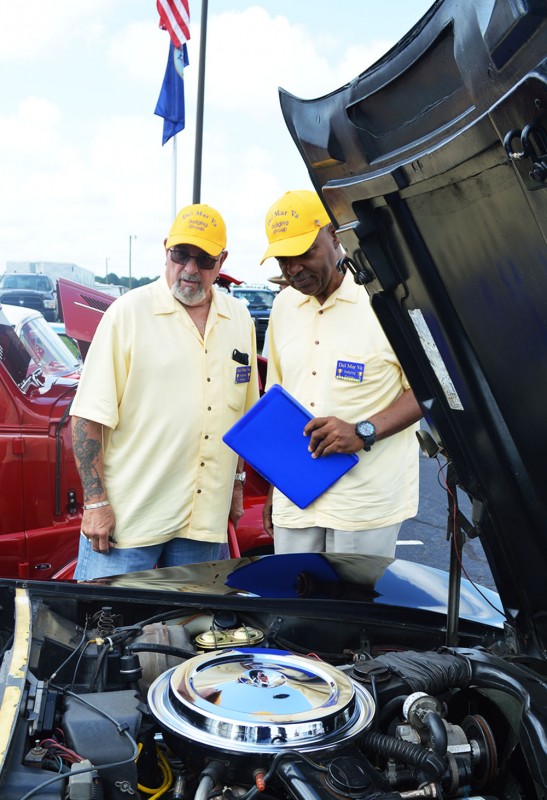 Upward of 80 entries — classic, vintage and muscle machines along with a handful of tractors — occupied the parking lot and grounds of the Greenwood CHEER Center.

The event, facilitated by Mabel Kelly and CHEER, featured live, silent and Chinese auctions and a bake sale along with assorted vendors.

“We’ve been blessed,” said Levin Clark Jr. of the outpouring of support for his father.

Ms. Kelley noted the support Levin Clark Jr. has provided to the community, including events benefiting organizations such as the Delaware Breast Cancer Coalition.

“Levin has given so much to the community. It’s time we give back,” said Ms. Kelly.

“Coming to the car shows, every car show means something to somebody, and this one is for cancer,” said Ken Towers of Georgetown. “I’m fighting cancer, so I understand it. We just have to do what we can do. Everybody here loves their cars. They love to stand around and talk. This is what it’s all about — people that love to get together and enjoy life with each other.”

Mr. Towers’ 1969 Camaro was among the vehicles scored by the Del-Mar-Va Judging Group.

“Everybody out here has a story. My story: I got a ’69 Camaro that I got for $40, in a raffle from the Horsey Youth Foundation,” said Mr. Towers. “Grandkids … we buy raffle tickets for everything. One Saturday night we get a call from the Horsey Youth Foundation congratulating us on winning first place, which was the car, and $7,600 later — that is how much the taxes were — we got it. We’ve spent money on this, and money on that.

“Now, we’ve got a car that is just so much fun to drive,” Mr. Towers added. “It’s fast, sometimes it’s too fast. It goes on down the highway very, very fast. I’ve talked to a couple of troopers.”

Among those on hand were members of the Georgetown-based County Seat Cruisers car club, whose show appearances have been impacted by the COVID-19 pandemic.

“This is our second show,” said County Seat Cruisers President Bruce Leppo. “We have a big variety of different cars, trucks and tractors.”

In his 1963 Rambler, Bob Herrington of Ocean View had a trunk full of nostalgia — a vast assortment of plastic food and accessory replicas from the picnic basket and drive-in car hop eras. Many items date timewise to the 1950s and 1960s when Mr. Herrington made trips to Mississippi with his parents to visit his grandparents.

“They didn’t have the interstate system down in the south yet, so we would stop at these roadside parks to feed yourself, because there weren’t restaurants all over the place either,” said Mr. Herrington.

His nostalgic collection was grown through the likes of eBay, yard sales “and every now and then running into some older couple that has something,” Mr. Herrington said. “I’ve been collecting all of this stuff for probably every bit of seven or eight years, maybe more.”

Major sponsors of Saturday’s event were Chambers Towing, Bunting & Murray Inc., the Truck Store, Anna Taylor and Tom Dempsey.
“We had a lot of help to get this together,” said Ms. Kelly.

Another benefit supporting Levin Clark Sr. is in the works. According to organizer Wanda Sammons, the event will be held at the Stockley Tavern on U.S. 113 south of Georgetown at a date to be determined.

This coming Saturday, Aug. 1, the car show scene shifts gears to the CHEER Community Center on Sand Hill Road for the 10th annual CHEER Car, Truck, Bike & Motorcycle Show. The event runs from 10 a.m. to 2 p.m., with a Cheerful BBQ Picnic available from 11:30 a.m. to 1 p.m.

The Station: Winners and losers in Paris, Rivian sets a delivery...