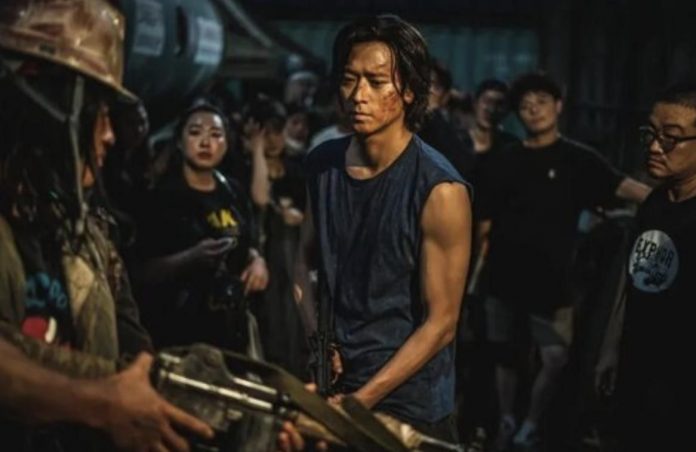 Gang Dong-won chose a career path on the day of his first acting class and his enthusiasm has not waned.

“I was so focused on the lesson and I just fell in love with acting,” said Gang. “For the past 20 years in this industry—still as an actor—I have loved my job and my passion remains the same as the day I decided to start this career.”

During those years he’s taken on a variety of interesting roles from a death row inmate in Maundy Thursday to a deacon dabbling in exorcism in The Priests to a wizard’s protege in Jeon Woo-chee. Currently, he can be seen playing Jung Seok, a desperate man fighting off zombies in the international box office hit Peninsula. The sequel to the successful zombie thriller Train To Busan premiered in Korea on July 15, attracting over two million viewers in the first week. A month later The Korea Herald reported that Peninsula had exceeded $48 million in box office sales in more than 15 countries. The film will premiere in the U.S. on Aug. 21, distributed by Well Go USA.

Before opting to star in Peninsula, Gang discussed the possibility with the film’s director Yeon Sang-ho, who also directed Train To Busan. Gang wanted to understand what the sequel would involve. As an actor he enjoys being challenged by scripts that offer something new and he discovered that the sequel delivered a completely different but equally engaging reality.

“I was impressed with his vision and presentation of Peninsula,” said Gang. “It’s something new and different from Train to Busan.  I was very impressed by the director’s passion. After reading it, I was very attracted to and impressed by the script, the storyline and, most importantly, we have not had any post-apocalypse movies before.”

Peninsula is set four years after the zombies infested the train in the film Train To Busan. The Korean peninsula lies in ruins. The undead have overwhelmed the living, trapping a few scavengers in a war zone. Humans survive in clusters, on and off the peninsula, but for most life is brutal and hopeless. Many of the surviving humans are as lethal as the zombies, acting with cruelty they justify as necessary for survival. To escape this miserable existence Jung Seok signs up for a questionable mission. The odds are against his surviving the assignment, but he takes that chance out of sheer desperation.

He is part of a team sent to recover a truck full of cash that is stranded on the peninsula. At night, the zombies are almost blind, so Jung Seok and his team plan to accomplish their mission by sunrise. However, their plans are thwarted by a vicious gang of human scavengers.

Before Jung Seok’s team is dispatched to the peninsula, they are told not to let their emotions get in the way of their goal. During an attack stopping to help an endangered comrade could result in a death sentence. Each man must focus on surviving and finding that truck full of cash. Yet, such indifference to the fate of their comrades will surely make them less human.

Fortunately, Jung Seok is rescued by a family that has not forgotten how to care about their fellow humans, despite their dire circumstances. Gang does not see Jung Seok as the film’s hero, no matter how many zombies the character decimates.

“The family in the movie is the actual hero and they bring hope to people in that apocalypse situation.”

When deciding on a role, the script is always Gang’s main consideration. A good script is also the reason he’s willing to work with new directors.

“If it is a new director, I will have to talk with the director and to understand more of their vision and thoughts about the project and, most importantly, the passion of the director.”

Gang is happiest working with people who are passionate about what they do.  He describes Peninsula as “incredibly fun to shoot.”

“The director was exceptionally good and handled every shoot very well,” said Gang. “He is truly kind on set and extremely passionate at the same time.  It was fun, and I am glad that I have worked with director Yeon, co-actors and staff in the project. They are very professional and fun to work with.”

Confronting festering zombies on set did not give the actor nightmares, like the ones he experienced after playing a death row inmate in the film Maundy Thursday. The research required to accurately convey the emotions of someone facing execution made it a hard role to shake off.

“I had nightmares every night for a while after the shooting and during the release of the movie,” said Gang.

Filming Peninsula was a very different experience. Zombies don’t scare him, although they are messy. They slobber.

“I had a fun time shooting Peninsula with the zombies,” he said. “Except that I did have to tolerate the zombies’ ‘drooling saliva war.’”

Gang is considering a few international projects, but the pandemic has placed so many plans on hold.

“I can say that I am not resting,” he said. “I am continuing to gear myself up and will be ready for my next project.”

Gang fine-tuned his English skills when he spent a year in Los Angeles, preparing for his Hollywood debut in the disaster film, Tsunami LA. The actor shot a few scenes in LA before returning to Korea for Peninsula.

“It was a particularly challenging time for me in a foreign country in a foreign language, but I did enjoy and appreciate the time there.”

Eager to test his limits, Gang plans to give it his all. “As an actor, it is my responsibility to deliver the role and story right to the audience, no matter where the work location will be.”

Tsunami LA is set to resume shooting in Romania when pandemic restrictions permit. Meanwhile, fans can enjoy the graceful zeal with which Gang dispatches the walking dead in Peninsula.

A Closer Look At The GMC Hummer SUT Exterior Features