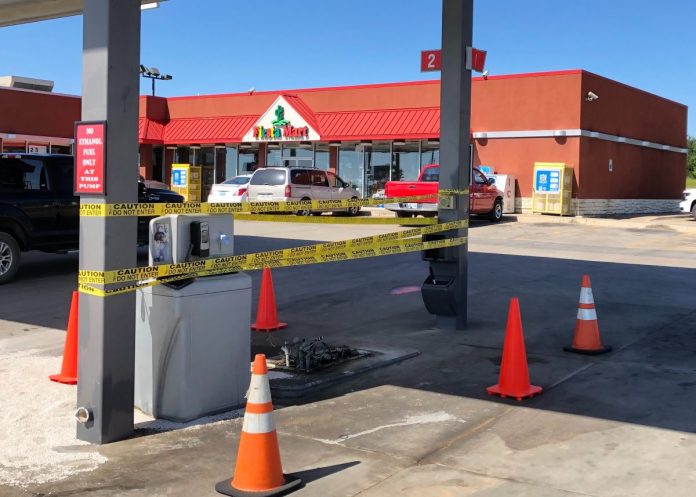 A convenience store gas pump was taken out in an apparent hit-and-run last week in Okemah.

At about 5:18 p.m. on Wednesday, April 29, an employee of Fiesta Mart called police to report that a trailer had just knocked over one of the store’s gas pumps.

Officer Jay Ashley responded to the scene, where he and the store’s manager reviewed surveillance video, which showed a white truck with a long gooseneck trailer pull up to pump number one.

The male driver can be seen pumping diesel into the truck, then walking into the store and purchasing two items. As the truck pulled away, the back end of the trailer swung toward the gas pumps, hitting pump number one and knocking it over.

Ashley stated in his police report that the driver seemed to be aware that he had hit the pump, as he stopped for parking lot traffic but continued to drive away.

According to the report, the driver used a Phillips 66 credit card to purchase the gasoline. Store management contacted Phillips 66 in an effort to obtain the driver’s identity but was unsuccessful.

Ashley then called the company, but a representative instructed him to call Synchrony Bank, which handles fraudulent claims. Ashley said he called Synchrony on April 30 and left a message to call him back, but as of Monday, he had not heard back. The incident remains under investigation.

There are several Fiesta Mart locations across Oklahoma, including five in Tulsa, one in Warner and one in Chouteau. The Okemah store is located at 609 S. Woody Guthrie, just north of Interstate 40.