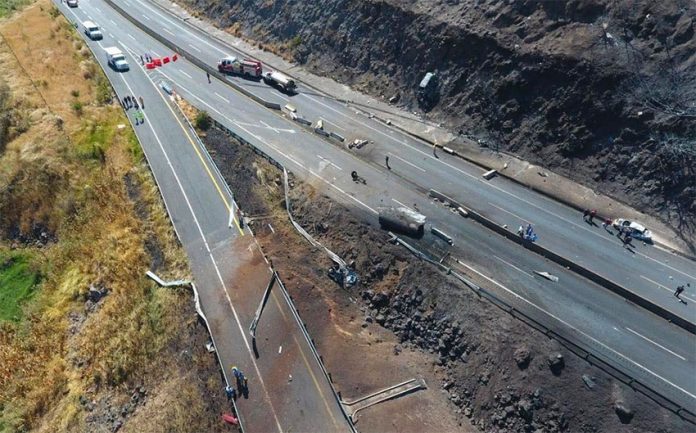 Site of the explosion Monday morning in Nayarit.

12 victims were killed instantly and burned beyond recognition

Thirteen people are dead after the driver of a tractor-trailer carrying propane on the Tepic-Guadalajara highway lost control and rolled over, crashing into another car and causing a chain-reaction accident that involved two other passenger vehicles before it exploded.

The explosion took place around 8:30 a.m. near the Nayarit municipality of Jala. Authorities said the explosion had a reach of about two hectares.

The Nayarit Attorney General’s Office said that 12 of the 13 victims never escaped their cars and were instantly killed by the explosion and burned beyond recognition.

One victim was initially taken to a hospital in Tepic. Authorities speculated that it was someone in the gas truck, either the driver or a passenger.

The bodies were taken to forensic authorities for identification and investigation.

Since we erected a paywall at Mexico News Daily, subscription revenues have enabled us to increase our news coverage, offer more feature stories and give us a firm financial foundation on which to operate. By subscribing, you can support our efforts to provide a greater variety of news and stories from Mexico. Please click here to subscribe.

Melbourne mother who was dragged along Western Ring Road by truck...