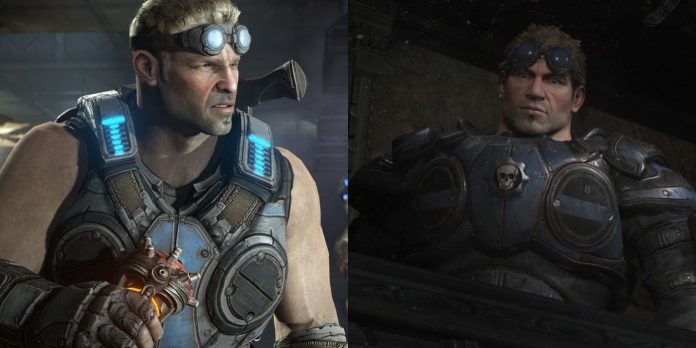 Though the Gears of War franchise is a mostly somber third-person shooter, the character of Damon Baird lightens the mood with hilarious lines.

On the surface, the Gears of War games look like serious military shooters, but in reality, they’ve always been filled with humor.

Delta squad member, Damon Baird, used to be one of the main sources of laughs in the early games. He was sarcastic, quick-witted, and extremely blunt. And he perfectly complemented the more energetic comedic stylings of his buddy Cole Train. Unfortunately, because of his reduced screen time in Gears 4 and 5, he didn’t get as much chance to crack wise. As a reminder of how funny the character can be, here is a collection of his most hilarious lines.

Any cutscene or conversation featuring Baird usually involves a sarcastic remark of some kind. And his humor was needed to provide some levity when Delta was exploring the creepy Imulsion facility.

While there, Baird and Cole spent time in the sewer, which prompted Dom to tease them about how they smelled. In response, Baird sarcastically offered Santiago a chance to join them in the waste.

9 “Those Things Could Stop A Truck. As Long As The Recoil Didn’t Dislocate Your Shoulder.”

A new piece of weaponry introduced in Gears Of War 3 was the Retro Lancer. It was first encountered when the Locust used it to create their makeshift turrets. Baird then gave a nice insight into the gun by pointing out that the recoil is so strong that it can seriously damage the user.

This was a comical way to introduce a new weapon to players. However, anyone who’s wielded the rifle knows that Baird spoke the truth.

As the technical wiz of the squad, Baird was in charge of fixing any broken equipment Delta needed. On one such occasion, he attempted to repair an APC outside the Fenix home.

When things were getting a little dangerous inside the house, Marcus asked Baird for a status on the escape vehicle. Baird gave a hilariously blunt summary, claiming it sucked. He tried to go into specifics afterward, but Marcus cut him off.

Baird has never missed an opportunity to crack wise, even while he’s near death. For instance, when left in the dreaded “Down But Not Out” state in the first game, he would sometimes point out that if the roles were reversed, he wouldn’t leave his teammates to bleed out.

It sounded admirable until he quickly admitted under his breath that it wasn’t actually the case. If he did then die, then at least his last words would’ve been funny.

6 “Don’t You People Ever Try Gratitude? Just To Break Up The Friggin’ Monotony Of Sarcasm?”

Baird complaining about people being sarcastic all the time is hypocrisy at it’s finest. Yet, he had a point when he called out the Stranded’s lack of gratitude.

It never mattered how many times Gears saved them; the Stranded always responded with bitterness because of the COG’s actions years before. At least in this instance, Baird was able to provide a witty retort.

This is another example of Baird’s willingness to make a joke even in a life-threatening situation. This one came when Delta was traveling to Anvil Gate using a Locust gas barge.

The journey started fine, but before they could reach their destination, they ran into Queen Myrrah riding her dangerous Tempest. She severely damaged the barge, and it rapidly lost altitude. When Marcus asked if they could slow their descent, Baird’s response was very witty.

Baird and Marcus didn’t get along right away. Although the two did meet right after seeing some of their fellow soldiers die, therefore tensions were running high at the time.

One of the people who died was Lieutenant Kim, meaning that Delta was missing a leader. Colonel Hoffman then promoted Marcus to Sergeant on the spot. As the self-professed smartest one in the squad, Baird was unhappy at Hoffman overlooking him for the position.

While his diminished role in the later games meant Baird didn’t have as many funny lines, he still had a few gems. For instance, when going up against a Matriarch in Gears 5’s Escape Mode, he would comically mistake the monster for his own mother.

Elinor Lytton-Baird has never been shown on screen, so perhaps she does resemble a giant Locust monster. Although more likely, Baird’s comparison comes from the fact that he hates his mother.

Sam made her video game debut in GOW3, and she spent a lot of her screen time bickering back and forth with Baird. At one point, a Leviathan destroyed a bridge the two of them were standing on. And Baird started to slide off the crumbling structure before Sam caught him.

As he stared up at her, it was the perfect time for a cliched expression of love. In a hilarious twist, the wise-cracking Gear took the opportunity to make it clear that he didn’t love her.

1 “You Were Great, I Loved Your Speech There, Especially With The B***h-A** Stuff. Very Good, Very Enlightening.”

One of the most memorable moments in Gears of War history came in the second game when Cole Train took over Queen Myrrah’s PA system. He vocally ran down the entire Locust horde with his trademark enthusiasm and verbiage.

Baird’s reaction to the speech was even funnier than the speech itself, as he credited Cole for how enlightening his extremely threatening words were. It was Baird at his humorous best.

NEXT: Borderlands 3: 10 Hilarious Quotes From The Vault Hunters

Ben Jessey spends all his time playing video games, watching TV, watching movies, watching football aka soccer (which I guess counts as watching TV) or writing about those things. He has a degree in Film and Television studies and is now a freelance writer.