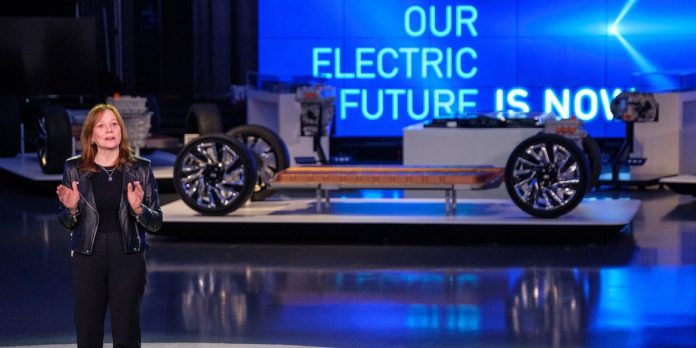 Who killed the electric car? Infamously, General Motors — the automaker’s discontinued EV1, a pioneering vehicle from the 1990s, was the fallen hero of a 2006 documentary.

But GM has more than made up for the presumed offense; in addition the Chevy Bolt EV, in market since late 2016, the company has declared that its future is electric and that 22 new electrified vehicles should be rolling out by 2023.

We already knew about a larger Bolt SUV, a GMC Hummer electric pickup, and the forthcoming Cadillac Lyriq EV. Now with the release of GM’s 2019 Sustainability Report, we learn that a full-size, electric Chevy pickup is on the way, offering “offering 400+ miles of range on a single charge,” GM indicated.

The electric pickup now looks to be the marquée products hitting roads and trails in the coming months. Tesla revealed its Cybertruck at the end of last year, startup Rivian has a pickup headed for manufacturing, and Ford is in the process of developing a hybrid F-150 as a precursor to an all-electric F-Series (we’ve already seen a prototype tow a million-pound load of freight train cars).

A full-size Chevy EV pickup should logically be badged as a Silverado, as Autoweek suggests, but who knows? Hummer came back as a GMC. So Chevy could play around with the nameplate.

Earlier this year, GM provided substantial insight into its Ultium battery technology and its overall electrification strategy going forward. That means a fleet of EV Caddys, Buicks, a Hummer SUV, and now a Chevy pickup. In the grand scheme of things, its an ambitious lineup that would give GM one of the largest EV portfolios in the industry.