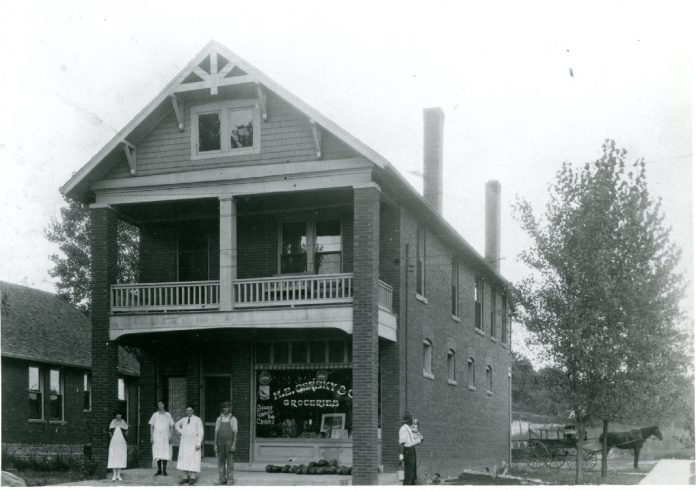 There was a time not so long ago that, no matter where you lived in Jefferson City, there was a neighborhood grocery within walking distance. You knew the grocer, and they knew you. The butcher, in his white apron, would make sure you got a good cut of meat. You got your groceries — they would carry the bags for the ladies, have it put on your tab and you would get the bill at the end of the month. Lee’s Market, DeBroecks, Schulte’s, Hardens, Kroeger, Graessle’s at Richmond Hill and others were open at prominent neighborhood corners.

The H. E. Gensky Grocery at 423 Cherry St., or the corner of East Miller and Cherry streets, was one of these neighborhood groceries. The two-story brick building was completed in 1915 by Joseph Pope, who was a street and road builder in Jefferson City. Pope purchased the lot and hired Joseph Schmidli, a local contractor, to construct the building.

Henry E. Gensky Sr., an immigrant from Bevern, Germany, was engaged to the Schmidli’s daughter, Stella. He had just closed his grocery store in the 200 block of Jefferson Street because of a delivery wagon accident and was looking for a new grocery store location.

Gensky rented the Cherry Street building and opened the H. E. Gensky Grocery Store in 1915. He purchased the building from Pope in 1917 and married Stella Schmidli that same year. In 1934, Gensky added two additional rooms to the upper floor of the building, which served as living quarters for the family. A new slate roof was installed over the old and new parts of the building at that time.

Gensky’s Grocery was one of the first, if not the first, grocery store in town to take phone orders and deliver the order to any address in Jefferson City. The orders initially were delivered by horse and wagon. But, beginning in 1922, Gensky purchased his first delivery truck and hired Earl Williams, who was the store’s delivery driver for 20 years until Mrs. Gensky retired in 1942. Henry Gensky Jr. fondly remembers riding with Williams on his deliveries during the summer months and learning the makes and models of cars by their emblems from Williams.

Another service was provided by Stella’s sister, Edna, who spoke German. Her job was to phone the German speaking customers on the southside and take their orders for delivery. The phone number of the Gensky Grocery was 1001.

Some of the produce and meat available to customers was procured from local farmers, trappers and fishermen. Freshly-dressed opossums could be found hanging from the front porch — considered a delicacy by many of the locals. They didn’t last long, Henry Jr. recalled.

Like many corner markets of the day, the Gensky grocery served as a gathering place for neighbors. The neighborhood children would sometimes gather in the paved area in front of the store to ride their tricycles and bicycles and play hopscotch. Many of the customers walked to the grocery and lingered to visit with neighbors.

One frequent customer, T. J. Johnson, was a Miller Street neighbor who was an employee of Lincoln University in the housekeeping department. He would always tell about his day and how many beds he made up at the school that day. Another customer always arrived in a horse-drawn wagon. He parked on the Miller Street side. He never carried paper money, only coins that were always jingling in his pockets. They called him “Money Bledsoe,” Henry Gensky Jr. remembered.

Gensky Sr. died in 1937 at the age of 47, following complications of a surgery. The News and Tribune noted the H. E. Gensky Grocery Store was one of the largest independent establishments in the city at that time. Stella and her sister continued to run the business until 1942, when she retired from the grocery business and rented the building to Mr. and Mrs. Robert Glover. It became Glover’s Market until 1946, when it became the Cherry Street Market, operated by Mr. and Mrs. B. F. Anthony.

In 1950, Stella sold the building to the Capitol City Lodge of the Ancient Free and Accepted Masons. The Anthonys continued to operate the store on the first floor until 1966, about the same time the neighborhood was being disrupted by the construction of the Rex Whitten Freeway. The half-century as a neighborhood market ended in 1967, when Dr. Charles Cooper opened his medical practice there. After relocating his practice in 1982, a series of renters came and went on the first floor, while the Masons continued to occupy the second.

Neighborhood corner markets served a vital service to residents — many of whom did not have cars — not just for the groceries, but for their pivotal role in keeping people in the neighborhood connected and informed.

In 2001, the old, solid brick building at 423 Cherry St. was added to the National Register of Historic Places. It currently stands vacant.

Henry Gensky Jr. is a native of Jefferson City. In his retirement, he has devoted much time to researching local history and sharing his recollections of growing up in the city. He has presented programs for Historic City of Jefferson, Jefferson Landing State Historic Site and the Missouri State Museum After Hours program.