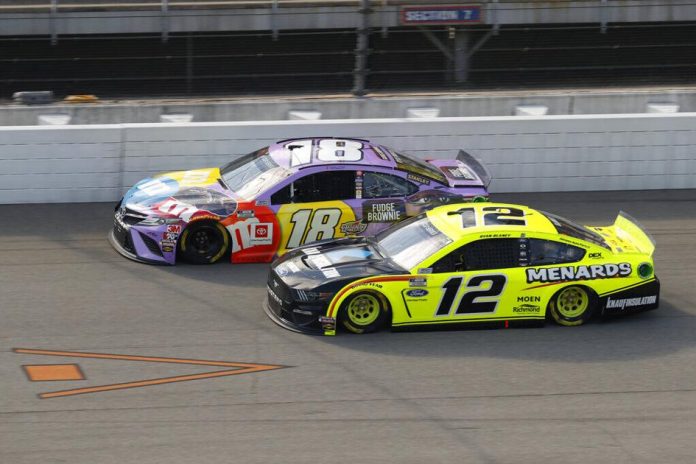 What was not to like about the weekend that concluded Sunday at Michigan International Speedway?

How about we never do that again?

MIS was an eerie, foreboding place as a NASCAR truck race, two Cup races and an ARCA race unfolded on the oval.

There was COVID-19 screening and one barricade after another where normally there would be a sense of welcome.

No fans. No flyovers. No sunglasses, seat cushions or programs for sale.

No one in checkered-flag pants. No party tents. No scanners for rent.

Kevin Harvick held off Denny Hamlin to win the Consumers Energy 400 that wasn’t really a ‘400.’

The Cup drivers went 156 laps, or 312 miles, for the second consecutive late afternoon as MIS hosted a doubleheader for the first time in its half-century as a NASCAR track.

The doubleheader format was fine.

The reasons for it — a season interrupted, then scrunched together and fans not allowed because of the coronavirus pandemic — were something we’d all do well to never experience again.

No campers. No Dale Earnhardt flags. No garage tours.

No trams. No infield revelry. No practice or qualifying.

The weekend started with Zane Smith’s emotional truck win, the first of his career, on Friday.

On Sunday, NASCAR Xfinity Series rookie Riley Herbst won the ARCA race for his first win in any series since 2017, and then the Cup cars took over the speedway again as drivers got more opportunity to use the new “choose rule” before restarts.

Four races in three days could have been a fan’s dream weekend.

Not in these COVID-19 times.

No coolers. No concerts. No kids in driver gear.

No souvenir rigs. No autograph seekers. No street car and show car displays.

Here and there, fans are being allowed back to tracks.

Texas had some in the grandstands. So did Loudon.

But we’re a long way from anything close to the normal level of public participation.

No driver introductions. No traffic cones. No tailgating.

No necks straining for looks into the garage area. No concession stands. No Michigan wave.

Harvick made memories with the doubleheader sweep in the No. 4 Ford Mustang. But even he would say the experience would have been sweeter if he could have celebrated with his son.

Brad Keselowski was disappointed again. The Rochester Hills native failed to drive to his first Cup win at his home track, ending the weekend when his No. 2 Ford got loose and caused a wreck that took Keselowski and Team Penske teammate Ryan Blaney out of the race.

A lot went on at MIS from Friday through Sunday, and good for the winners.

But there’s an emptiness.

The weekend won’t go down as one of the great ones in track history.

No couples in matching driver t-shirts. No turkey legs. No driver appearances.

No pace-car rides. No fireworks. No track walk.

Let’s hope we never do that again.

NO INJURIES WHEN PICKUP LOSES WHEELS ON 119