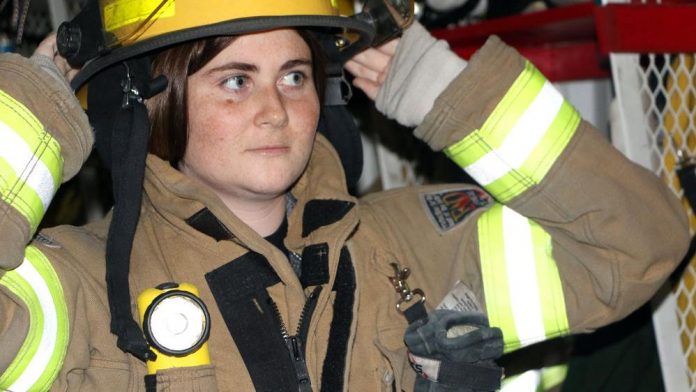 A vehicle collision or a house fire sends people fleeing from the scene and looking for help. While these situations are chaotic, Ashley Maschmeier, a emergency medical technician and paramedic, arrives to provide her community with a helping hand.

Growing up, Maschmeier never saw herself becoming a firefighter, but she was interested in the medical profession.

“I knew I wanted to go into the medical side, so I took an EMT (emergency medical technician) class my senior year of high school,” she said.

Gering Fire Chief Nathan Flowers was the teacher for the course. He  implemented a year-long cadet program that Maschmeier decided to join. After completing several months of training about the operations, medical and firefighting responses, they were able to respond to calls.

“I loved it from there,” she said. “I just like the fast-paced environment of it. You never know what you’re going to walk into because every scene is different.”

She responded to her first call during her senior year at Gering High School. Her first call was an ordinary medical call, which Maschmeier said was a good place to start.

“I just remember hanging back and watching to figure out how they do things,” she said. “You can train for things and it’s not the same when you are actually there.”

Since her first call, Maschmeier has learned the importance of operating as a team and doing her assigned responsibilities while on scene.

Following her 18th birthday, Maschmeier joined the department in August 2018.

“I really enjoy it,” she said. “I can’t imagine, now that I’m on it, not being on the department.”

While her duties have not changed, she is working through classes to progress in her certifications. She is currently working on welding classes and has taken a red card class, which allows her to deploy to national fires.

Working with the Gering Fire Department, Maschmeier said it has been a good place to start working in the emergency medicine field because they get dispatched to various calls from medical to fire emergencies.

After beginning her career with the department, Maschmeier was surprised by the amount of equipment they needed to know and be prepared to use on scene.

To ensure they are prepared before arriving on scene, Maschmeier said the team communicates while in the fire truck.

“Along the way, when we hop in the truck, we have roles assigned so that we know when we jump out what we’re doing and going to grab.”

Regardless of the weather conditions, first responders will respond to a call, even if that means working to put out a blaze or providing medical assistance in snowy and sub-freezing temperatures.

“We have our gear, which helps and then we’re obviously working, so we have some body heat there,” she said. “But, I think the adrenaline is probably the main reason. You’re not focused on being cold when you’re at a fire or helping somebody in a car crash; you’re focused on what you’re there to do.”

Aside from responding to calls, Maschmeier has had many fond memories working with her colleagues on the way to and from an incident.

“I’m not sure if it’s the most fun or most embarrassing, but my boot fell off in a fire,” she said. “It was right after I got it on and it was a little too big, so it fell off.”

The most enjoyable part about her job is completing the trainings with her colleagues every Tuesday. The department also trains with the City of Scottsbluff fire department monthly, so when they provide mutual aid, they are familiar with each other’s equipment.

“Most of them are super excited to see us and interact, so it’s cool that every time they see a fire truck or get to hit the lights and sirens that it makes their day,” she said. “That makes our day in return.”

When she’s not responding to calls, Maschmeier is in school.

“Going to school and working another job is not super easy,” she said. “If you love what you do, you’ll make yourself go out at a moment’s notice, whether you’re eating dinner, shopping or sleeping.”

That mentality comes from Maschmeier’s desire to know that if she was in a crash or fire that someone would come to help and she wants to be that sense of security for her community.

After being accepted to nursing school, Maschmeier enrolled in courses to earn her prerequisite credits. Her plan is to become a registered nurse and then take a bridge class to become a paramedic.

“My ultimate goal is be in flight medicine,” she said. “That way, you kind of get the in hospital aspect and the out of hospital EMS, too.”

Maschmeier said the most challenging aspect of being an EMT is maintaining focus through a situation.

“You have to just focus on what you’re doing because there’s so much other stuff going on,” she said. “Let’s say it’s a car accident and there’s a lot of chaos out there. You just have to focus in on what you’re doing. You’re there for the patient at that moment. Nothing else matters.”

Once the calls come in, Maschmeier heads to the Gering Fire hall and suits up in her fire suit, boots, gloves and hat to head out. Despite not knowing what they are driving into, Maschmeier said she is grateful for the opportunity to give back to her community.

“When people have to call 911, it’s obviously one of their worst days,” she said. “But, I’m lucky enough to be able to respond and answer their call for help and give back to our community when they need it.”

We’re always interested in hearing about news in our community. Let us know what’s going on!