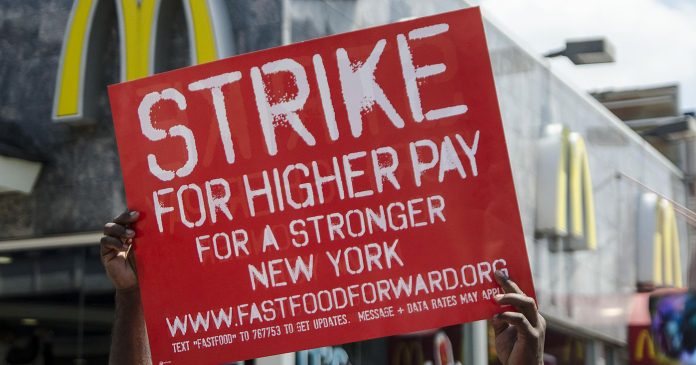 The first Monday in September was earmarked Labor Day as an election year appeasement by President Grover Cleveland. During the Great Depression of 1893, a strike by Pullman railroad car workers in Chicago went national and it took 12,000 federal troops to break it.

The leaders went to federal prison and the group spearheading the strike, the American Railway Union, was disbanded and most of the other industrial workers’ unions were done in.

But protests still boiled, and soon after the bloody end of the strike, legislation was passed by both houses of Congress and President Cleveland signed Labor Day into law to cool things off.

It wasn’t looked at as just a paid holiday, but as a sort of victory, and, as one labor leader said, a day when workers’ “rights and wrongs would be discussed.”

It was an early example of something created out of a need for good PR and has since died along with the once essential movement that produced it.

Unions went into hibernation after the Pullman strike, but roared back during the next Great Depression beginning in 1929.

Organization and collective bargaining thrived for several generations, contributing to one of history’s triumphs: the rapid and extensive expansion of the American middle class. In the 1950s, 50% of American workers held union cards. Today, according to the U.S. Department of Labor, only 11.1 % of workers are unionized.

With fast food workers — and others who have now been recognized as “essential”  — agitating for unions this Labor Day, it brought to mind my own experience scuffling at low-paying jobs and the three union cards I carried.

I’ve seen unions from three distinct angles – the weird, the great and the awful.

But first, some thoughts on why some people think unionizing a fast food worker is strange or funny. We should remember that most fast food employees aren’t kids, but people trying to support families. The U.S. Department of Labor, for example, found the median age of these workers is over 28.

These jobs are widely disparaged in American culture – someone “flipping burgers” is a figure of fun. (It’s the same as the widely used term “trailer trash.”  Can there finally be a moratorium on that? Do people using that expression ever think of the kid growing up in a mobile home, hearing herself and her family referred to as trash by someone on TV?)

And unions? They’re considered an anachronism at best, “job killers” at worst. That is, except to those union members who have a job and make a living wage. The left and the right both complain about how the middle class has been squeezed and shrunk over the last several decades, and both political wings have their reasons for this.

One argument for the stagnation of real wages is that, with the death of unionized labor, real money in the pocket has shrunk.

So — my three unions. As a high school kid I landed a full-time night job at a municipal golf course. My duties: Starting at 5 p.m. in the summer I ran an ancient, one-gear truck, following the final foursome around the 18 holes, setting up sprinklers when they cleared the greens, moving the hoses after a couple of hours and, later, driving around and shutting them off and coiling them in the back of the truck.

I then went into watchman mode, although what I was watching for was never spelled out. In the fall and spring months, I was all watchman from 5 p.m. on. I did my duty by sprawling on a broken couch in a shack in the woods off the 15th hole, listening to the radio and reading.

I was paid peanuts, but it kept me out of the pool hall. The job improved immediately one midnight when a guy in a suit walked in. This was startling, since for a year I’d seen no one after that final foursome every evening. Was he the one I should have been watching for? Before I could say anything, he introduced himself, and called me “brother.”

I was now a member of the International Brotherhood of Teamsters, Chauffeurs, and Warehousemen of America. I was told a few dollars in dues would be taken out of my paycheck next week, handed a pamphlet and a card and got a handshake. Before I could ask a single question, my new union brother vanished.

The few dollars were removed from my check, but more were added. I got an immediate 20% raise and wouldn’t laugh at Jimmy Hoffa jokes for years.

Did I deserve the raise? Asking the question defines you.

A few years later, at loose ends, I went to a state labor department office in Manhattan one morning. By that afternoon I was running an elevator — a bit erratically, for sure — at a five-story school on Central Park West. Soon I was a member of Local 32B of the New York Building Services Union.

The pay was good, and there were benefits, including medical and dental. Summers, when school was out, the doormen and elevator operators became maintenance men, and I painted classrooms and hallways, did pointing on the roof facade and was a plumber’s assistant.

Walter Brown, our shop steward, kept telling me to pay attention, plumbers made way more than elevator jockeys. Did I listen to Walter? If I had, my address today would be Easy Street, Fat City.

My final union was the New York City taxi drivers union, where I paid dues for four years. The union, and the industry as a whole, have changed radically since those days. Back then, the union was led by mobbed-up goons who were in bed with the big taxi fleet owners.

The general union meetings were chair-throwing parties —  literally. If you went down to the hall on Park Avenue South to get some clarification on dues or rules, a couple of union brothers named Sonny and Junior were happy to clarify you out in the parking lot.

But whenever I hear of people trying to organize, I remember the cabbies I shared long afternoons with at the fleet garages shaping up for work, and the Teamsters I came to know, and especially Walter Brown, who truly believed in a union of bread and roses.

No pick-up of debris from Isaias in unincorporated Dare County