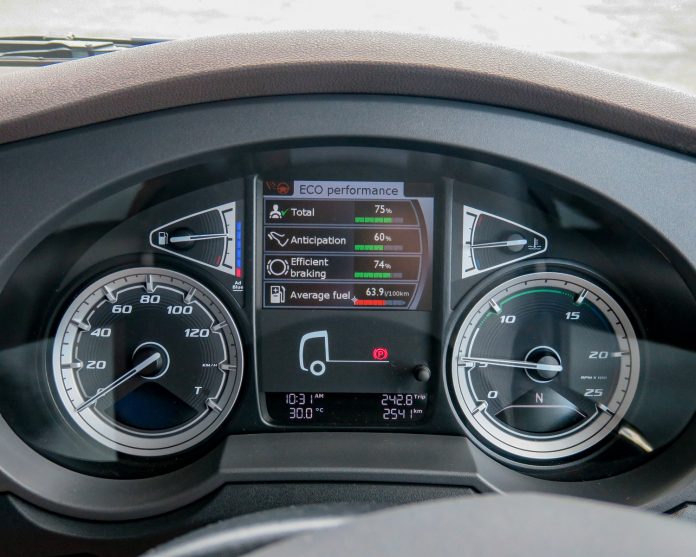 The new look of the new DAF Truck models is much more modern and is capable of giving the driver full information about what’s going on in the truck. Much more than we have been used to from the Paccar owned truck maker in the past.

The previous model dated from the noughties and DAF in Australia have skipped straight over the first Euro 6 models up to the new models which won the International Truck of the Year for 2018.

Sitting in the driver’s seat, there is full information on the screen directly in front of the driver and scrolling through the various screens, the number of options and data sets available to the driver seem endless. It is possible to drill down as far as you like to find out what’s going on, or just look at a couple of overall indicators to keep an eye on just what’s going on.

DAF’s turn and push controller to the driver’s the bottom left makes it easy to control what’s happening on the screen. This controller is unchanged in twenty years, but it is simple to use and there is no need to improve it even as the functions available have multiplied.

The screen which is probably the most useful to leave as the default when driving, is the ‘ECO performance’ screen which shows the driver’s overall performance score and then breaks it down into anticipation, efficient braking and fuel consumption.

The bottom right of the screen tells you what is going on in the transmission. There’s the gear as well as the mode, manual, auto with eco mode set and auto with eco off. The difference between eco on and off does make for more aggressive gear changing and sees the engine reach a higher rpm before an up-change. However, the system will inevitably revert to the eco setting.

Most drivers will not need to turn eco off in most situations the system is flexible enough to adapt. The auto is getting the job done in just about every situation and if the driver does feel the situation needs a bit more urgency then pushing through the detent on the accelerator gets the message across very precisely.

Of course, other drivers will feel the need to intervene more as the low revving can be a bit unnerving for drivers brought up on roaring high revving engines. This is where the driver score comes in. Letting the computer do its own thing is the most efficient way to drive this truck, most of the time and get a higher score. The skills required by the driver in this situation is to be able to discern just when intervention is needed.

With the new electronics on the latest generation DAF trucks giving the driver full information about what’s going on, you can take a deep dive into all of the options on the truck’s information system and it could be quite some time before you come up for air. The different options within all of the sections are considerable. Unfortunately, in the strictly limited timetable for a truck test drive the chance to play with this system is severely limited. Any driver stuck somewhere waiting to load or unload can have countless hours of fun trying to explore all of the DAF control system’s nooks and crannies.

The steering wheel is a little less complicated, with three buttons on each side of the wheel, placed to be able to be pressed by the driver’s thumb while driving. To the left there’s the phone and stereo controls, to the right it’s all about cruise control, speed limiter, idling speed control and adaptive cruise control settings.

The ACC parameters can be set beforehand through the central screen directly in front of the driver. To activate the ACC it’s a simple thumb press on the steering wheel. The important numbers here are the time gap between the truck and the vehicle in front and the amount of overrun allowed before the engine brake is activated.

As in many of the latest trucks coming out of Europe on the market, all of the switches can be moved around to any position at all to suit the preferences of the operator or driver.

Nurses protest at White House over lack of protective gear during...