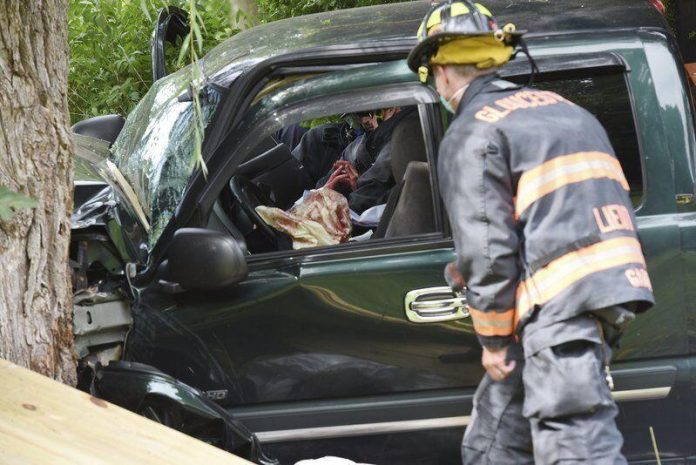 A man was taken by helicopter to a Boston hospital Monday afternoon after the truck he was driving hit a utility pole, went through a fence and hit a tree.

The driver was trapped, fire Deputy Chief Steve Aiello explained, and it took firefighters 15 to 20 minutes with the Jaws of Life — a heavy-duty hydraulic rescue tool — to  get him out of the vehicle. He was then airlifted to Massachusetts General Hospital.

The call came into the Fire Department around 3:15 p.m. for a motor vehicle accident on Reynard Street in Gloucester.

Upon arrival, from the appearance of the vehicle’s damage, police officers determined that it was a high speed and high impact accident as the driver’s pickup truck hit a telephone pole, went through a resident’s fence, and hit a tree.

Aiello explained that the Gloucester Police currently have an accident reconstruction team at the scene of the accident.

This story will be updated at gloucestertimes.com.

In other news taken from the logs of Gloucester’s police and fire departments:

10:13 p.m.: A Granite Street resident reported that his 2018 Black Jeep Renegade was taken from his residence sometime during the evening from his driveway without his permission.

7:28 p.m.: A woman from out of state reported that she believes her grandmother is in danger. Police contacted the womanand stated that the individual was fine.

6:18 p.m.: A person in the emergency room of Addison Gilbert Hospital was reported to be uncooperative.

3:47 p.m.: An accused shoplifter was reported to be in the store Bananas at 78 Main St. Upon arrival, police spoke with the Littleton resident who admitted to taking a pocket book and two small items from the store known as Frida B. at 269 Main St. She had put the items in her canvas bag and gave the bag to her brother, who she planned to meet up with later. The owner of Frida B. explained that she did not want to pursue the matter, but no longer wanted the woman to come into her store.

2:46 p.m.: A Rockport woman came into the station lobby with cash that she reported she had found in Ed’s Mini Mart on Aug. 29.

12:54 p.m.: A Western Avenue woman reported that her Trump flag was stolen from her front yard.

11:20 p.m.: A woman from 93 Prospect St. was reported to be yelling on and off for about an hour. Police spoke with the woman who said she would quiet down.

9:43 p.m.: A caller reported a very large and loud house party, with no social distancing, between Hesperus Avenue and Newton Road.

9:30 p.m.: A group of approximately five youths were reported to possibly be vandalizing property on High Street. No vandalism was found by police.

11:25 p.m.: Police were dispatched to talk to a woman who said that since January she has been contacted by phone by a person she only knows as “profet olu.” This person told her he has a spell cast on her and that he will heal any wounds she has for a fee. Soon after payments were made through a wire service, the woman explained her pain went away. Over the course of the year, she has made a total of $1,000 in payments through a money wire service to “profet olu.” She explained to police that she believes this is witchcraft and is upset about a spell being placed on her. Police advised the woman to block the phone number and to contact her real medical doctor if she has any other health concerns.

9:22 p.m.: A caller reported cars parked on Macomber Road with a group of approximately 30 kids walking into Goose Cove. Police spoke with the kids, who agreed to leave the area.

7:17 p.m.: Police were dispatched to 11 Tragbabigzanda Road to investigate a report of graffiti. Upon arrival, a man explained that his wife and children had spray painted several items on the roadway three to five weeks ago and now their work has been sprayed over by someone. He explained that today they confronted, photographed, and recorded a man with a skateboard leaving the area. They believe that the man is the person who painted over the work.