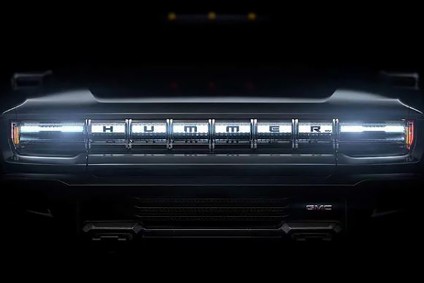 We’re just over a year away from the return of Hummer, although it will be much changed from what went before. While these will be big vehicles – a pick-up and an SUV – each will be electric, and the brand folded into GMC. That division also has electrified vehicles in its future but before then, the money to pay for their development has to be earned by new and next generation gasoline and diesel vans, pick-ups and SUVs.

GM stated in December 2019 that it would manufacture the next generation of its GMC Canyon and Chevy Colorado mid-sized pick-ups for North American markets at the Wentzville plant in Missouri. No date of introduction was given.

As build of the current model in Thailand would end there later in 2020, GM stated in February, the next Colorado would be mainly for the Americas. The company is selling its Rayong plant to Great Wall Motor, pulling Chevrolet from the local market and also closing the Holden brand (the outgoing Colorado, built at Rayong, was Holden’s best seller).

Reports out of the US in April stated that the next Canyon and and its Chevy equivalent would be potentially solely available with GM’s L3B engine. This is a 2.7-litre turbocharged four-cylinder gasoline turbo. The new trucks should debut for the 2024 model year and be based on the VSS-T platform. Details of the current model can be found in PLDB, and the same applies for the larger Sierra 1500 pick-up.

Announced to the media in January 2019, the latest Sierra Heavy Duty 2500 and 3500 pick-up trucks were new for the 2020 model year. They went on sale in North America from July/August 2019. Chevrolet first revealed images and details of their twins, the 2020 Silverado HD trucks, during December 2018.

The latest HDs are bigger and each has a longer wheelbase than the previous generation variants. Both 2500HD and 3500HD dual rear wheel and single rear wheel configurations are available.

There is a choice of two powertrains: a 401 hp and 464 lb ft 6.6-litre gasoline OHV V8 (GM engine code: L8T) with direct injection mated to a six-speed transmission, and a 6.6-litre Duramax diesel V8 (L5P) which delivers 445 hp and 910 lb-ft of torque through an Allison-branded 10-speed transmission. There should be a facelift for the 2023 model year and replacements for MY2027.

The current generation Acadia, a five-, six- or seven-seat crossover, is shorter (4,917 mm) than the previous shape model (5,101 mm). GM quotes the 2WD versions weighing from 1,794 kg versus 2,112 kg for the old model. This is mainly thanks to a new, lighter platform.

Fresh for the 2017 model year, this was the first vehicle to use General Motors’ C1xx. The front- and/or all-wheel drive architecture is mainly for crossovers and SUVs and was developed with several wheelbases in mind.

The All Terrain variants have an AWD system with an Active Twin Clutch. This replaces Off Road mode on the drive mode selector, which, according to GMC, works with the model’s exclusive AWD system to offer enhanced hill-climb capability. All Terrain Acadias are distinguished from the rest of the lineup with a body-colour grille surround, black chrome-look trim and unique wheels. Inside is five-passenger seating, dynamic All Terrain interior accents and covered storage bins in the rear cargo floor in place of a third-row seat.

In February 2019, GMC announced a facelift and powertrain changes for the 2020 model year. The truck’s debut took place two months later at the New York auto show. Among the highlights were the arrival of a turbocharged 2.0-litre four-cylinder engine as well as a nine-speed automatic transmission which GM brands as its Hydra-Matic 9T65. This replaced a six-speed transmission. Buyers may instead choose 2.5-litre four-cylinder or 3.6-litre V6 engines.

Some believe there could be an extra model in GMC’s future, positioned in the size space below the 5.1 m long Yukon (but much smaller than the giant 5,700 mm Yukon XL). It might even be stretched to 5.2 m as being a unibody CUV, these vehicles are chasing different buyers. An ‘Acadia XL‘ would have three rows of seating and a big boot, while also being about the same length as the previous generation Acadia. Such a vehicle could be added when the next generation arrives during 2023.

The successor to the Savana is expected to appear in late 2021. Although it may use GM’s T1XX architecture, some sources believe that the next model will instead be electric and based on GM’s BEV3 architecture. That could also mean production at D-Ham (Detroit-Hamtramck) rather than at Wentzville.

The other scenario had been for Nissan North America to adapt its slow-selling NV full sized van for General Motors. In that case the Savana and near-identical Chevrolet Express would have been manufactured by Nissan at its Canton plant in Mississippi. Those plans were cancelled, and NNA will soon be discontinuing its own van too.

GM’s future electric van, which might be sold as a Chevrolet (Express replacement) as well as a GMC, should be available for both passengers and cargo. The development code is said to be BV1. The life cycle will likely be in excess of a decade, which means production could last into the early 2030s, possibly longer.

Adding to the speculation that General Motors was planning to revive Hummer, Mary Barra spoke about a “BET” (Battery Electric Truck) at a conference in November 2019. The company would put the vehicle into production “in fall 2021”. At the time, it seemed odd that GM’s CEO didn’t take the opportunity to name Chevrolet and/or GMC as the brand(s) in question.

In January, it became clear that the company will make Hummer a sub-brand of GMC and relaunch it with two electric models: a pick-up for the 2022 model year, and an SUV for MY2023. They would be rivals for the Rivian R1T and R1S. The platform is BT1, which is a special EV-compatible version of T1. Build will take place at D-Ham in Michigan.

The truck, partially revealed in a Superbowl commercial, was to be shown in full on 20 May but on 29 April, General Motors said that this would no longer happen. Three months later, GMC told the press the truck would be shown “in the fall”.

The Hummer pick-up will be the first model to be fitted with what GM is branding its Ultium battery pack. The company told the media in March that the cost will be below US$100 per kilowatt-hour and offer a driving range of up to 400 miles on a full charge. The packs, which have a nickel-cobalt-manganese chemistry, will be assembled in Ohio as part of a JV with LG Chem. As for the life cycles for these vehicles, expect that to be seven to eight years.

Reports for many other manufacturers’ future models are grouped in the OEM product strategy summaries section of just-auto.com.

More detail on past, current and forthcoming models can be found in PLDB, the future vehicles database which is part of GlobalData’s Automotive Intelligence Center. That includes those GMC models not included in this feature.

This is the fifth of seven features exploring the passenger car brands of General Motors, including its Chinese JV with SAIC and Wuling Motors. First came an exploration of what’s ahead for Baojun, then Wuling, Chevrolet cars and pick-ups, followed by the same brand’s crossovers and SUVs. Next will be Buick, then Cadillac.

The appreciation has grown, but trucking industry still feeling the effects...

Bids opened for demolition of former silk mill in Wilkes-Barre |...