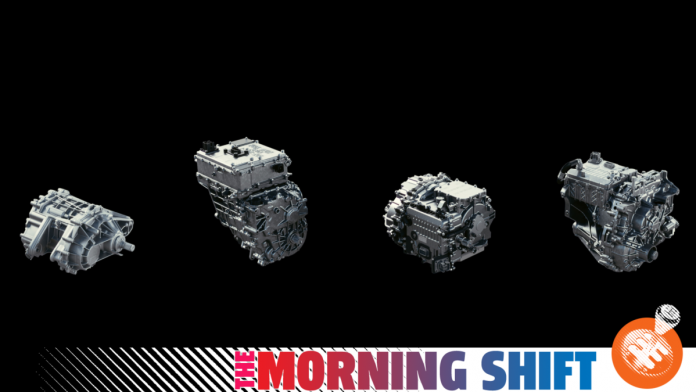 The Morning ShiftAll your daily car news in one convenient place. Isn’t your time more important?

GM opened its robe on electric, a Nikola board member says to relax, and Kia. All of that and more in The Morning Shift for September 16, 2020.

GM is, these days, desperate to compete with Tesla. It’s setting up a partnership with the (slightly dodgy) startup Nikola, braying on about Ultium, and generally doing what it should have been doing for years.

The move, which follows earlier GM initiatives on next-generation batteries, comes as the automaker looks to build a vertically integrated electric car business, comparable to Tesla, inside its ongoing operations.

According to a GM statement viewed by Reuters, the automaker is set to unveil that it has designed and plans to produce on its own five interchangeable drive units and three motors, which it calls the “Ultium Drive” system.

GM said its new electric drive systems, sometimes referred to as e-axles in the industry, will have a versatile enough power output to allow them to be used with vehicles ranging from beefy pickup trucks to performance vehicles.

Adam Kwiatkowski, GM’s executive chief engineer for global electrical propulsion, said that by designing its own e-axles, GM could better integrate them with an EV’s battery and the rest of the car. E-axles combine gear, motor and power electronics into a single system and help convert the electricity from batteries efficiently to propel the vehicle.

GM “designed these drive units simultaneously with a full gambit of electric vehicles that fill out our portfolio,” Kwiatkowski told Reuters in an interview last week.

And here is a snippet of GM’s announcement:

GM applied 25 years of EV experience to Ultium Drive with lighter and more efficient designs that feature clever integration. For example, by integrating the power electronics into the drive units’ assemblies, the mass of the power electronics has been reduced by nearly 50 percent from GM’s previous EV generation, saving cost and packaging space while increasing capability by 25 percent.

The power and versatility of these drive units will help GM migrate high-output segments like pickup trucks and performance vehicles to all-electric propulsion while providing the bandwidth to propel GM’s EV portfolio well into the future.

All five drive units are expected to be powered by one or more of three motors including a primary front-wheel drive motor, which can be configured for front- or rear-wheel drive, and an all-wheel drive assist motor.

The company will launch the first of seven planned new all-electric models next year, according to Automotive News. All those cars will be here by 2027.

The new EV strategy, outlined Wednesday by Kia CEO Ho Sung Song at the automaker’s Hwasung plant, is part of a push to derive 25 percent of its global sales from EVs by 2029.

The plan comes just a month after sibling brand Hyundai Motor announced plans to introduce a global battery-electric brand under the Ioniq name. It is all part of the Hyundai Motor Group’s effort to sell 1 million electric vehicles worldwide by 2025. In that period, the Korean auto juggernaut wants to be a market leader with a 10 percent global share in the EV segment.

The dedicated EV will be code-named CV and be delivered worldwide starting next year, Kia said in a release. Unlike Kia’s Soul EV, which was an electrified version of an existing gasoline-powered nameplate, the new entry will be electric-only. It will be built on a new Electric-Global Modular Platform, or E-GMP, which Kia said will have the best-in-class interior space.

We are hurtling toward a world that by 2022 or thereabouts might have a lot of good EV options, even here in America. The first company to sell an EV under $20,000 here can take my money.

The 2018 crash with one of Uber’s test cars is thought to be the first fatal incident involving a self-driving car.

Rafael Vasquez, age 46, who is also known as Rafaela, pleaded not guilty on Tuesday after being charged in the death of Elaine Herzberg on Aug. 27, court records show. She was released pending trial set for February 2021.

Herzberg died after she was struck while walking a bicycle across a street at night. The first recorded death involving a self-driving vehicle prompted significant safety concerns about the nascent autonomous vehicle industry.

A Tempe police report said Vasquez was repeatedly looking down instead of keeping her eyes on the road. Prosecutors in March 2019 said Uber was not criminally liable in the crash.

GM is now suing in state court after its federal lawsuit against Fiat Chrysler went nowhere. GM is also suing a former UAW official and a former FCA board member in state court in Michigan.

The three filings allege, as GM has since it first sued FCA in November, that FCA, [former UAW vice president Joe Ashton], [former FCA board member Alphons Iacobelli] and others were guilty of “corporate espionage” that directly harmed the company, and includes claims GM first made in August that they used offshore bank accounts to funnel bribe money. U.S. District Judge Paul Borman in July dismissed the federal case with prejudice after calling it “a waste of time and resources for years to come,” and subsequently dismissed GM’s new evidence of offshore accounts as “too speculative.”

GM, in the case filed Monday in Wayne County Circuit Court in Michigan, for the first time named the banks that it alleges were used in the scheme.

“General Motors is pursuing claims over which the federal District Court for the Eastern District of Michigan declined to exercise jurisdiction and related claims — mainly involving breaches of fiduciary duties that individuals owed to GM while they were employees or directors of the company,” GM said in a statement. “The federal court made no determinations on the merits of these claims. We look forward to presenting these cases in court.”

FCA, in a statement, called GM’s new lawsuit a “a rehash of the preposterous conspiracy theories” listed in its federal case.

Nikola has really had a time of it lately with a short-seller targeting it last week and Nikola’s founder throwing a subsequent tantrum. Also this week we learned that the Securities and Exchange Commission is looking into whether Nikola broke any laws.

Now one of its board members spoke to the Financial Times to make his case for the company.

Jeff Ubben, the founder of activist hedge fund ValueAct and an early investor in Nikola, has strenuously defended the electric truck start-up and its leadership against fraud allegations from a short-seller.

In an interview with the Financial Times, Mr Ubben, who sits on Nikola’s board of directors, said the company and its founder Trevor Milton were misunderstood. He said Nikola could revolutionise transport and compared it to Apple.

Mr Ubben recently left ValueAct, taking with him an environment-focused investment fund that he now runs at a new firm called Inclusive Capital Partners. That fund has an investment in Nikola.

Mr Ubben sold more than half the Nikola stake in late August and he now has 5 per cent of the company, versus 12 per cent before. The sale was forced on him by investor redemptions during the transition from ValueAct, he said.

“We are just like Apple, trust me,” must be among the most repeated things in Silicon Valley.

During the Depression, Durant went bankrupt, and he spent his last years managing a bowling alley in Flint.

This is also how I plan to spend my final years.

Neutral: How Are You?

I woke up at 5:30 this morning and made some coffee and then decided to take out the trash. Since it was early, I figured I wouldn’t encounter a neighbor so I took out said trash in my boxers. Big mistake.