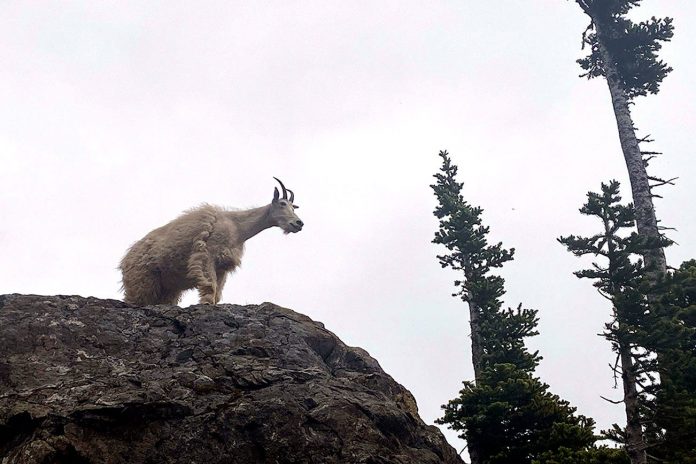 OLYMPIC NATIONAL PARK — For a fourth and final time over two years, unwanted mountain goats will take to the air hoisted by helicopters beginning Monday before they are trucked from Olympic National Park to their new home in the North Cascades mountain range.

The National Park Service, the state Department of Fish and Wildlife and the U.S. Forest Service are coordinating the translocation effort, which began in 2018.

The goal: return the species, which have lived in the park and Olympic National Forest for almost 100 years, to their native alpine habitat.

The main staging area for the two-week translocation effort is at Hurricane Ridge and is not open to the public.

Hurricane Ridge Road and all other area trails remain open.

A map of the area trails is available on the project website.

No other closures will be in place for this project in Olympic National Park or the national forests.

The animals will be processed by about 25 personnel drawn locally instead of from a wider area, as was the case in past efforts, to guard against transmission of COVID-19, Olympic National Park spokeswoman Penny Wagner said Friday.

“We’re making sure all the processing staff is from the Olympic Peninsula,” she said.

“All the pieces are in place,” Wagner added.

“Each table will have a team that will be staying together the whole time.”

The mountain goats will be netted or darted with tranquilizer, helicoptered to the staging area, processed by trained staff, deposited in crates, maneuvered into refrigerated trucks, and trundled about 135 miles to 12 sites in two North Cascades national forests.

“Another helicopter on that side of the state will work with the national forests and flow animals to those areas,” Wagner said.

The survival rate in the North Cascades for the translocated animals has been 60 percent for males and 48 percent for females, she said.

The final translocation effort is intended to eliminate the animals from areas where they damage the Olympics’ delicate vegetation. Some have harassed hikers.

Mountain goats are native to the Cascade Mountains and Alaska.

The animals are not native to the Olympic Mountains, which do not naturally have the salts they crave.

Mountain goats follow and approach hikers, attracted to the salt from their sweat, urine and food, a Fish and Wildlife manager said in a press release.

“The North Cascades is a vast landscape that is less population-dense than Olympic National Park,” said Will Moore, a mountain goat expert.

“We also know that the Cascades have natural salt licks that mountain goats depend on.

“Because of this, they won’t rely as much on humans to provide their salt fix.”

Their increasingly close proximity to humans in Olympic National Park generated complaints and confrontations that forced park managers to issue regulations that included banning hikers from taking bathroom breaks on and near trails.

“The mountain goat translocations not only augment resident populations, increasing population viability, but tracking the collared goats assists with our understanding of goats’ use of the habitat within the North Cascades,” Phyllis Reed, a Forest Service wildlife biologist, said in the press release.

North Cascades mountain goat populations have recovered from low numbers of 30 years ago, but the species is still absent from many areas of its historic range.

The mountain goat population swelled to 725 before translocation efforts began in 2018, sparked by the 2010 death of Bob Boardman, a Port Angeles man gored as he hiked Klahhane Ridge.

Wagner said 35 mountain goats, more than 10 percent of those removed since 2018, were translocated from the popular tourist destination.

“That right there definitely had a big impact in terms of visitors not reporting those same kinds of interactions,” Wagner said.

Based on past removal efforts, it was estimated that about 50 percent of the mountain goat population, or 325-375 animals, could be safely captured over four, two-week periods, Wagner said.

In the last two years, 326 of the animals have been removed and 275 translocated to the Cascades.

Sixteen were transferred to a zoo, 18 died during capture, six were euthanized, three died during transport, and eight were lethally removed when they could not be captured after they were spotted during the translocation process, Wagner said.

Animals that cannot be captured will be targeted in a lethal removal operation conducted between Sept. 9 and Oct. 17 by 21 teams of three-six outdoors enthusiasts evaluated by National Park Service and state Department of Fish and Wildlife staff.

They must pass a proficiency test, including shooting three out of five shots into an 8-inch circle at 200 yards, right before tracking down the animals, Wagner told Northwest Sportsman (https://tinyurl.com/PDN-GoatHunt).

After collecting biological data on the animals they kill, participants can take the “meat and other materials,” Wagner told the publication.

She said Friday that the teams will supply their own firearms and must use non-lead ammunition.

All rifles must be chambered for centerfire cartridges of .243 (6mm) caliber or larger, according to requirements for the removal.

Mountain goats that remain after being culled this fall will be lethally removed in aerial operations in 2021 and, if necessary, 2022, Wagner said.

A public review process for a mountain goat management plan began in 2014, resulting in an environmental impact statement and the subsequent issuance of a management plan in 2018.

The aerial capture operation beginning Monday is being conducted through a contract with Leading Edge Aviation, a private company that specializes in the capture and transport of wild animals, according to the press release.

The helicopter crew uses immobilizing darts and net guns to capture the animals, then lifts them in specially-made slings to Hurricane Ridge.

The animals are cared for by veterinarians before state Fish and Wildlife managers truck them to staging areas in the north Cascades.

From there, helicopters airlift the animals in their crates to their new alpine habitats.

The translocation plan has been widely supported by area tribes.

The effort in the Cascades includes participation of the Lummi, Muckleshoot, Sauk-Suiattle, Stillaguamish, Suquamish, Swinomish, Tulalip and Upper Skagit tribes.