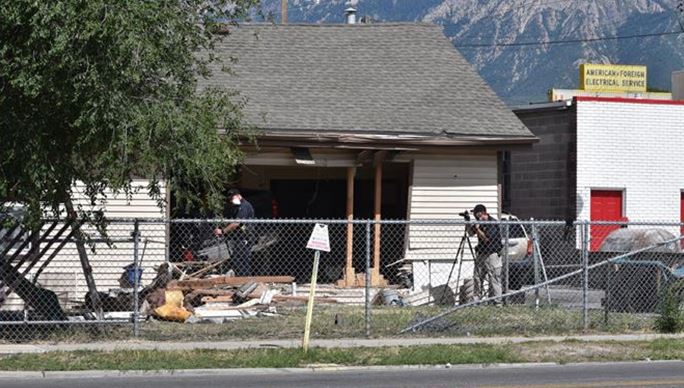 SOUTH SALT LAKE, Utah, July 5, 2020 (Gephardt Daily) — A GoFundMe account has been established for a 10-year-old boy who was seriously injured when he was trapped for several minutes under a pickup truck that crashed into his home Friday.

The boy, whose name is Zahid, was flown to Primary Children’s Hospital.

“Zahid (10yrs old) and his siblings were the victims of a reckless driver in Salt Lake City, Utah,” the GoFundMe page says. “The driver crashed into their home and Zahid was hit. He is doing well but will have several surgeries that will be on his face, leg and possibly brain due to a hematoma.

“Until now he has responded very well. Katia (Zahid’s mom) is a single mother of 3 and will need help from anyone who is able to give.”

A goal of $150,000 in donations has been set to “get Zahid and his mom ahead before hospital, reconstructive surgery, and physical therapy bills add up.”

In an update on the account, organizer Lucia Espinoza Pendleton said the breathing tube has been removed and “Zahid is talking! He wanted sent a voice message saying: ‘Im doing well. I think they’re going to fix me real soon. And I love you all a lot.’”

Sgt. Matthew Oehler, with the South Salt Lake Police Department, told Gephardt Daily that two other children, ages 2 and 5, were inside the residence at the time of the crash, but were not hit.

Oehler said the truck was being driven by a man in his 50s, who was heading east on 3300 South when he lost control of the vehicle, which went over a curb of a strip mall, crashed through a residential fence, and went into the house.

“He was driving at a high rate of speed, and the pickup is completely in the house,” Oehler said at 4:20 p.m. Friday, nearly three hours after the accident. The truck was still inside the house at that time.

“Good Samaritans were able to pull two kids out of the house, but there was a 10-year-old child who was trapped under the pickup for some time, at least 20 minutes.”

“At this point, the house is definitely unsafe,” Oehler said. “A building inspector will determine the structural integrity of the house. But we’re still trying to extract (the truck) from the residence.”

No information is available yet as to the cause of the crash or any factors that may have contributed to it.