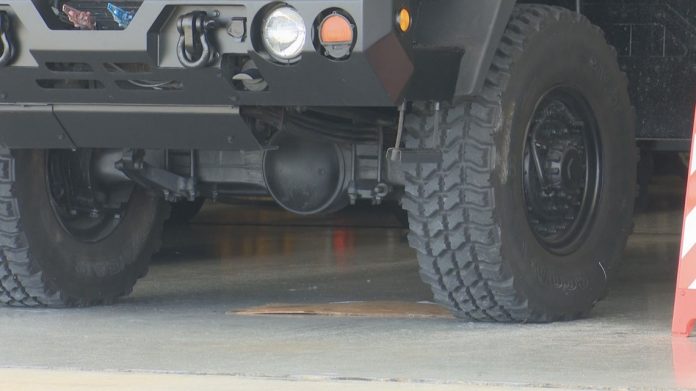 The On Your Side team calculated since 2017 more than 600 items valued at $23,152,401.30 were distributed to Florida law enforcement through the program.

JACKSONVILLE, Fla. — Equipment once used by the military was spotted on First Coast streets.

A lending program that’s been in place for decades is worth more than half a billion dollars nationwide and roughly $14 million to Florida departments in 2019. This is familiar to First Coast News Crime and Safety Analyst Mark Baughman who worked in local and federal law enforcement. It’s known as the 1033 Program.

“It’s extra or it’s no longer able to deploy for whatever reason, it doesn’t meet the military standard or not able to logistically move that equipment, so they make it available under this program for law enforcement,” Baughman said.

A list of equipment obtained by the On Your Side team shows years worth of items sent across Florida. Some agencies are getting guns, scopes and tactical gear, but one of the most expensive things, vehicles, worth hundreds of thousands of dollars kept showing up on the list.

What are these mine-resistant vehicles and why are counties across the state, including here, on the First Coast getting them?

“You’ll see a lot of specialty units use them. When I was in Pinellas County we used them primarily to aid our marine program and getting stranded vessels out of the water,” Baughman said.

The On Your Side team had the chance to get inside one of these former military vehicles while embedded in Flagler County during Hurricane Dorian. The two-and-a-half ton cargo vehicle replaced a Vietnam era troop truck that the department uses almost exclusively in its hurricane and high water rescue response.

“Sometimes surplus equipment becomes available through the 1033 program, which will allow an agency to reduce their operating costs and become more efficient,” Leeper said. “As an example, we have a forklift that we obtained through the program that helps us move heavy items around our fleet/maintenance shop, as well as in our evidence area. This is an item we needed and getting something like this for a nominal cost is better than paying several thousand dollars for the very same thing,”

The agencies are not on the hook for the item’s worth. Equipment or gear is already paid for out of the military’s budget and loaned to local police who are responsible for the cost to transport, store and maintain any items.

The On Your Side team called the State of Florida coordinator for the 1033 Program. Housed within the Department of Management Services. Our calls were not returned.

Baughman explained that even though these items are coming from the military — it is not about militarizing the police.

“Don’t always have to call upon the National Guard to come out, we have the potential to actually go out and do it and it may be lessening the threat visually than calling a National Guard unit out,” Baughman said.

Make Jinja a city, Bugembe a rolex and sleazy town