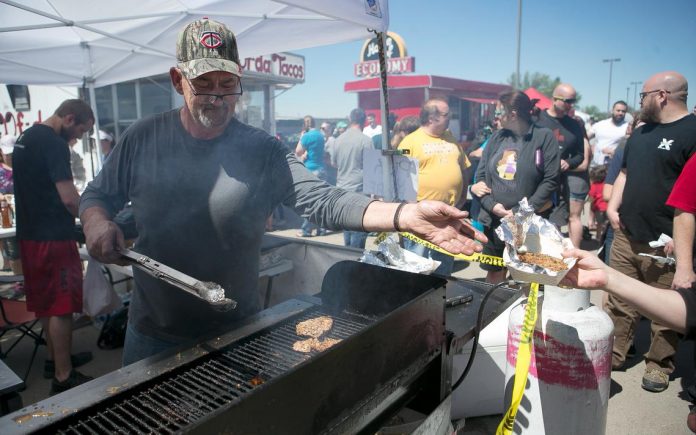 Billed as a Fair Food Extravaganza, the store hosted food truck vendors from across the region. Scott Haag, owner of Skip’s Gourmet food truck, who has been serving lunches at Home of Economy twice weekly for about the past month, thought the Saturday, June 13, event, would give an economic boost to businesses that rely on fairs and festivals for revenue. Most of those events have been canceled or postponed because of the coronavirus pandemic.

Home of Economy was on board to host the festival because it fits in well with the fun events the store typically hosts during the summer, said Allan Defoe, Home of Economy manager.

“We like to do a good mix of stuff,” Defoe said Saturday, surveying the lines of people waiting to buy food. About 10 vendors, representing food items from mini donuts, to Mediterranean food, to nachos, participated in the Fair Food Extravaganza.

The event, which began at 9 a.m. Saturday had about 25 customers when food trucks opened for business and was going full steam by 11:30 a.m. Customers in line at the food trucks didn’t seem to mind waiting to place and receive their orders, expressing gratitude to the vendors for coming to the Grand Forks event.

“Thank you for coming,” Tammaro said.

Though Home of Economy encouraged social distancing at the event by not placing tables in the parking lot, food customers didn’t seem to mind being in a crowd. Few people wore masks and people stood together, in groups, chatting with one another about the bright June day and the fare they were enjoying.

For Justine John, nachos were one of the fair foods of choice.

“It’s nice they’re doing this because all of the fairs are canceled,” said Allison Slominski, who was part of the group of women with John.

The event drew Paul Sacchetti, a Home of Economy employee, back to work on his day off.

“Fair food, you’ve got to get it,” Sacchetti said.

Besides the bag of sugar-coated almonds he bought and had stored in his pocket, he planned to buy a couple of tacos and take one to his wife who was at work and couldn’t join him at the Fair Food Extravaganza.

Home of Economy staff plan to talk about the extravaganza and what improvements could be made, Defoe said. The store likely will host another similar event and is considering hosting an extravaganza at its other stores, Besides Grand Forks, Home of Economy has stores in the North Dakota cities of Grafton, Devils Lake, Minot, Williston, Jamestown and Watford City.

“It’s nice we can do something for the community,” Defoe said. “When we can’t have the fairs, at least we can give them the food.”

.Most of the food truck vendors planned to continue serving at the Saturday event until evening or until they ran out of fare..