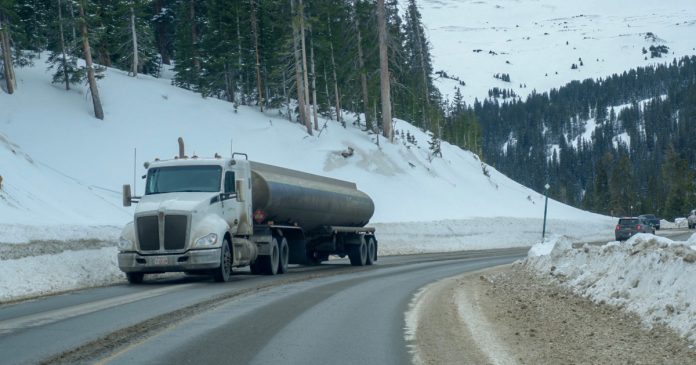 By Alex Zorn, The Daily Sentinel

GRAND JUNCTION — Mike and Jamie Williams, owners of a local food truck, took it upon themselves to help out semi-truck drivers coming through Grand Junction, delivering vital supplies to the virus-stricken nation.

Though a statewide stay-at-home order has left truckers with open roads and far less traffic than usual, it’s come at the cost of not having places to sit down and eat a meal, sleep or even go to the bathroom.

On Wednesday night the food truck served 100 barbecue meals to truckers driving through The Pilot Truck Stop in Grand Junction. On Thursday night, they followed it up again with an even bigger showing.

Typically serving lunch at the Tractor Supply in Grand Junction, the food truck opened especially, and only, to truckers both nights so they didn’t have to worry about where they would eat dinner. The owners pulled a double shift on Thursday to make it work.

The latest from the coronavirus outbreak in Colorado:

A former trucker himself, Mike Williams (“Big Mike”) knows the challenges that come with the trucking profession and knows a little bit about the situation that the crisis has created.

A few weeks ago, Williams put his on apron and, along with his wife Jamie and her mother, served a free barbecue meal, which included a big BBQ sandwich, fries and a drink, to 75 truckers who stopped by. After such a successful night, they knew they had to do it again.

“I think that we helped with morale a little bit,” Jamie Williams said. “You could see it on their faces. They couldn’t believe we were doing it.”

She said that a sister and brother came through that evening. First the brother saw the free BBQ and grabbed a meal and immediately radioed his sister to show up and get hers.

“We know that we are all counting on the truckers, now more than ever, who have such a vital yet thankless job,” a post on the food truck’s Facebook page reads.

After such success that night, Mike and Jamie asked their customers and the community to help keep the free meal movement going.

“We’re just a food truck. We asked the community for support and boy did they pull through, “ Jamie said.

Big Mike’s Pork ‘N’ Wings created a GoFundMe campaign with the goal of $2,000 to go to feeding truckers free meals.

The campaign was created on Monday and by Tuesday afternoon that goal was reached. With more than $2,000 raised, including a $600 donation from a single customer, the next evening they were out at Pilot’s Truck Stop feeding truckers 100 free meals.

Jamie said a lot of donations that came in on Monday and Tuesday were from truckers themselves.

“Not only is the community supporting us, but truckers are too,” she said. “A family in Ohio donated. Random Facebook friends I’ve never met have sent in money.”

“We’ve never fed people for free to this extent before, we just like giving back,” she added.

Chamery Lumas was heading to Las Vegas from Aurora and he needed to stop for gas when he saw signs for free BBQ on Wednesday night. With only $20 to get dinner he said he was lucky to pick this truck stop in Grand Junction before bringing the meal back to his Amazon big rig. He didn’t expect he would get to Las Vegas until around 3 a.m.

Carl Cruz had medical supplies in the back of his semi-truck he was driving from California to Cardinal Health in Denver.

Cruz added the empty roads have been really nice during this time, especially around Las Vegas.

The latest from The Sun

Readers sound off on the George Floyd protests – New York...