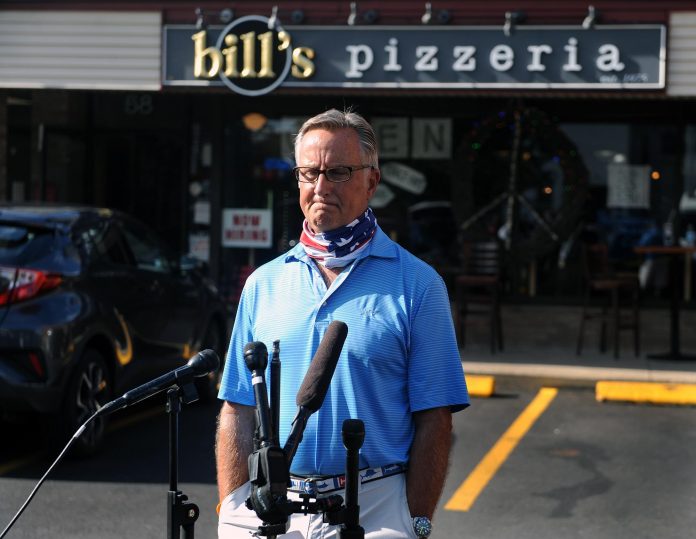 On the day authorities announced charges against a 17-year-old boy, a family member said one of the badly-injured victims is on the road to recovery.

NATICK – Just hours after police had announced they had filed charges against a teenager in a horrific hit-and-run crash on Aug. 18, Tony Catlin had several questions.

“What was he doing on the road? How does this happen? Does he have a complete disregard for the law and public safety?” asked Catlin, whose cousin Kimberly Gunner, 51, was critically injured in that crash and remains hospitalized in an intensive care unit.

Authorities say the 17-year-old boy behind the wheel was high on marijuana and driving with a suspended license when his Chevy Silverado pickup truck jumped a curb on Washington Avenue and struck Gunner and her husband Andrew Colbert who were out for a walk. The truck drove away without stopping, police say.

Catlin said his cousin is slowly recovering from her devastating injuries.

Catlin said she has turned the corner and is alert in the intensive care unit at a local hospital.

One side of her body, including an arm and leg, was crushed by the truck that hit and backed over her, he said.

On Monday, she had a day-long surgery and another is scheduled this week. Procedures could involve multiple skin and muscle grafts, he said. Her jaw was broken in four places.

“It’s like putting back together a crushed bottle,” he said.

Colbert, 39, is home recovering from his injuries, and has visited his wife in the hospital. So has Gunner’s mother and brother.

Arraignment is scheduled for Sept. 10 in Framingham Juvenile Court. Juvenile court hearings are not open to the public.

Authorities say the teenage driver had two young friends as passengers at the time of the crash.

Catlin wonders what was going on in their minds.

“The moral character of these kids. They left a horrible scene,” Catlin said. “How does that happen? Why didn’t they turn themselves in?”

He said the filing of charges is “great news” and is confident that justice will be served.

“I’m sure they’ll prosecute as heavy as they can, given the heinous nature (of the accident),” he said.

Describing Gunner as “super upbeat in life,” he said she will make the best of a difficult situation.

“She’s determined to walk again,” Catlin said. “Every day Kimberly progresses is a gift for us.”

Catlin expressed gratitude to Natick police and the State Police Crime Lab for their investigation. He also thank those who contributed to fundraising efforts to help Gunner and Colbert pay their medical bills.

The Greg Hill Foundation, founded by Boston sports radio personality Greg Hill to help families touched by tragedy, raised more than $10,000 for the couple as of Tuesday night.

“It’s been an incredible outpouring of community support,” Catlin said.

Henry Schwan is a multimedia journalist for the Daily News. Follow Henry on Twitter @henrymetrowest. He can be reached at hschwan@wickedlocal.com or 508-626-3964.

Truck Volume Scanner Market Grow at Exceptional Rate During 2020 to...