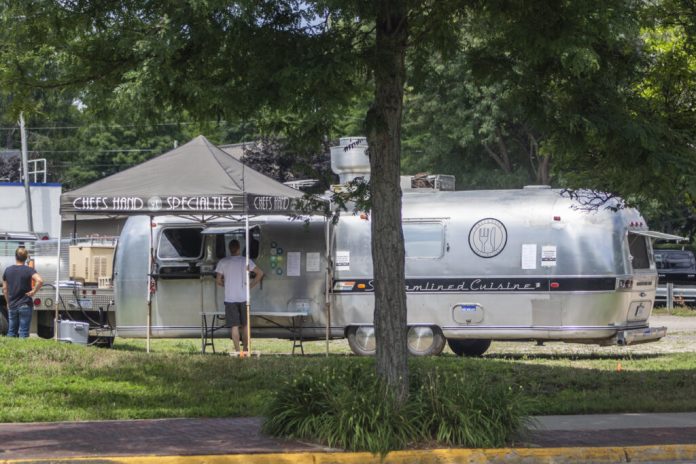 Food vendor Chris Petersen of Sheridan operates his Chef’s Hand Specialties food truck Wednesday afternoon from the northwest corner of M-57 and M-91 on the vacant lot owned by Ray Winnie. A food truck permit submitted to the city by Petersen to operate for the remainder of the summer was approved by the Greenville City Council on Tuesday evening. — DN Photo | Cory Smith

GREENVILLE — Despite being well past dinner time, members of the Greenville City Council admitted with a laugh Tuesday evening that as their meeting neared its conclusion, their stomachs were beginning to growl.

After the third discussion of the night regarding requests from multiple food truck vendors to operate in the city, Councilman Jeff Scoby made his thoughts clear.

“I’m getting hungry,” he interjected with a smile.

The council entertained three applications, all from food truck vendors who have chosen to operate within the city this summer.

The first request came from Andy Hoisington of Belding, who sells pulled pork, hot dogs and fries from his A&W BBQ food truck. Hoisington’s truck, which began operation in the city Tuesday, is located in the parking lot of the Meat Shack at 1217 W. Washington (M-57).

The second request was from Chris Petersen of Sheridan, who for more than a decade has operated his Chef’s Hand Specialties food truck business out of his Airstream trailer, selling a variety of lunch options. Petersen’s truck, which has been operating throughout the summer already, is located this year at the northwest corner of M-57 and M-91 on the vacant lot owned by Ray Winnie.

The third request came from Patrick Breimayer, co-owner of Psycho Brew, who asked that the Crazy Dogs LLC food truck business be allowed to operate, selling hot dogs in the parking lot of his business shared with Flat River Brewing Co. at 300 W. Greenville West Drive.

Members of the council approved all three requests unanimously.

Bosanic admitted that the application from Petersen should have been received at the beginning of the summer, but the coronavirus pandemic resulted in it falling off his radar. 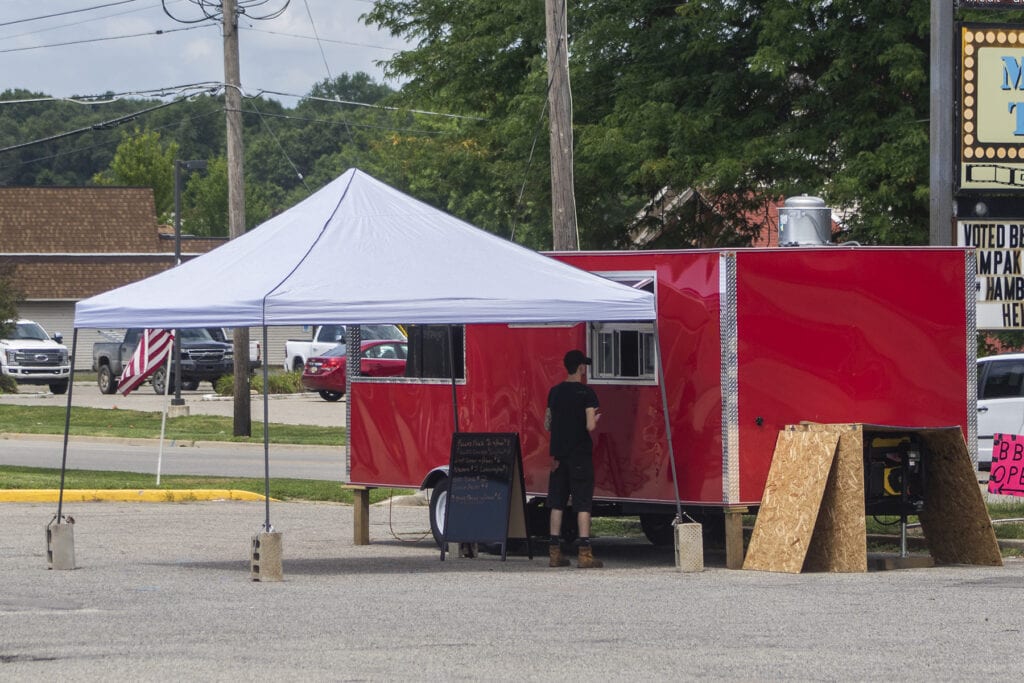 Andy Hoisington of Belding operates his A&W BBQ food truck Wednesday afternoon from the parking lot of the Meat Shack at 1217 W. Washington (M-57). A food truck permit submitted to the city by Hoisington to operate for the remainder of the summer was approved by the Greenville City Council on Tuesday evening. — DN Photo | Cory Smith

“I have to confess, this one got by me as he is already operating. In the flurry of the COVID executive orders and the like, I forgot that because this is proposed on private property, as the zoning administrator, I cannot simply consider this application without council’s consideration,” he said. “ Consequently, you may consider granting approval of the application for the remainder of the request.”

According to Bosanic, each food vendor must pay an annual fee of $250 to operate for as long a time period as specified within a year. As a result, Bosanic said the city may review its policies regarding food trucks and how it awards the permits.

“They could be here for a week or it could be for six months, so I think we should have a tiered system, based on the number of days operating,” he said. “Food trucks essentially are competitors of restaurants who have brick and mortar established in this city. We wanted to make sure there was a reasonable offset for them to come in. We haven’t heard any discord from any businesses or restaurants, but as more and more food trucks pop up, it could become an issue.”

Bosanic said he would seek out surveys of how other communities manage their food trucks permits and potentially bring those results before the council at a later time.

Members of the council showed unanimous support overall for the various food trucks in the community, based on examples of business done in a positive manner in previous years.

“Chris has been a longstanding food truck vendor with his trailer. I see a nice crowd every time he is there in operation,” Councilman Mark Lehman said.

In addition, the permits require that the location and operation of the food trucks shall not impede traffic flow to or from adjacent properties or businesses, nor shall it adversely impact them in any way. The operation of the food trucks shall comply with all health department rules and regulations including social distancing provisions for employees and customers.

For Sale: Battle-Ready 1973 Dodge Challenger on a Military Truck Chassis