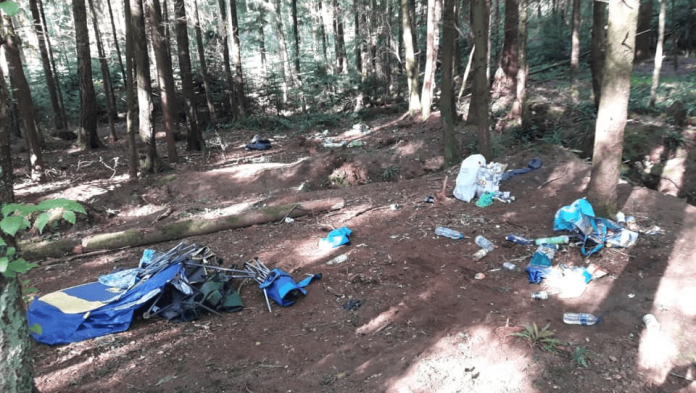 LARGE groups of wild campers have been moved on from the New Forest over the last fortnight by Forestry England wardens who are “working round the clock” to counter the problem.

Locals have reported gatherings of youngsters between 20 and 30-strong arriving in Brockenhurst with camping gear and alcohol on at least three occasions over the last two weeks.

They were seen making their way to Setthorns campsite. It is one of those controversially closed for the rest of the year by operator Camping in the Forest – despite repeated warnings of wild camping and loss of trade from visitors staying away.

After the group was moved on by Forestry England wardens, they were later seen heading towards Wilverley Inclosure and Longslade Bottom where they apparently camped on the Forest.

One group was said to have arrived at Brockenhurst on the train from Southampton.

Others have been spotted apparently camping in the woods near Sway.
Residents in the villages have reported finding camping gear discarded along with large amounts of rubbish.

One angry local posted on social media a photo of the mess he found in Brockenhurst, saying: “My wife and I came across this lot walking our dogs this morning and returned with bin liners, of which we have collected three full ones.

“Bottles were thrown everywhere. Broken glass, chair. Tent pegs all over. Looks like a case of Corona, cans of Fosters, bottles of vodka amongst the collection.”

Another resident reported seeing a large group of youths making their way into the Wilverley Inclosure with “a lot of camping gear, bedding and booze”.

Others claimed that one group had been “bounced out” of Setthorns campsite and were seen then making their way to Longslade Bottom.

Local resident Nick Howe filled three bin bags with rubbish when he and his wife came across a mound of dumped equipment and waste while walking their dog in Setthorns Inclosure.

He said: “There should be fines as a minimum for anyone caught leaving trash all over the Forest. If there were, then hopefully people would think twice about it.

“CCTV must have caught the culprits and their pictures should be plastered everywhere so they can be found. Sadly, I do not think these incidents will be the last over the summer.”

On Sunday morning an FE ranger discovered a tent had been set up on land near the Pig Bush car park, off the B3056, near Beaulieu Road railway station. Having spotted smoke billowing from the campfire, they called out an FE fire truck. A video of the fire being put out was posted on Twitter by FE, which said it had “damaged the fragile Forest floor and could easily have spread”.

At around 6pm the same day an FE team responded to reports a group of visitors had lit a fire under a gorse bush on the heathland near Longslade Heath car park, off Burley Road in Wilverley. Firefighters from Brockenhurst had to dig around the seat of the blaze to contain the incident.

An FE spokesperson said: “Wild camping is illegal in the New Forest and can cause considerable damage to wildlife and the landscape. Our team are working around the clock with colleagues from other Forest organisations and the emergency services to patrol the Forest and advise the public.

“We have also had much support and help from local people who have reported to us incidents of wild camping, fires and other anti-social behaviours threatening the Forest.

“We have moved on a number of wild campers and extinguished their campfires which, if left unattended, could have devastating effects.”

As reported in the A&T, Camping in the Forest decided to keep all its campsites closed in the New Forest this year, having shut them during lockdown. It said it could not generate enough revenue in the time remaining without threatening its operations in 2021.

FE said it expected camping to be “ever more popular this summer” and it was urging people to plan ahead, stay in suitable campsites with appropriate facilities and “respect our treasured New Forest”.

In the most recent incident, police had to move on wild campers who had pitched a tent at Hatchett Pond, near Beaulieu, as officers patrolled the area with a Forestry England ranger.

A post on a local police Facebook page afterwards told how the group left the site after being told wild camping is banned in the Forest.

During the same day, the patrol also found tipped garden waste at Bull Hill car park in Pilley, which police said would have to be removed to “prevent cross contamination”.

The Facebook post said: “We had a very productive day on patrol with one of the Forestry England Rangers today.

“We found a family on a wild camp at Hatchett Pond, explained that it wasn’t allowed anywhere in the Forest and they moved on.

“Then sadly we found a fly tip of garden waste at Bull Hill car park which will now have to be removed to prevent cross contamination.

“Thanks to everyone we met today who was doing the right thing and keeping the New Forest special.”