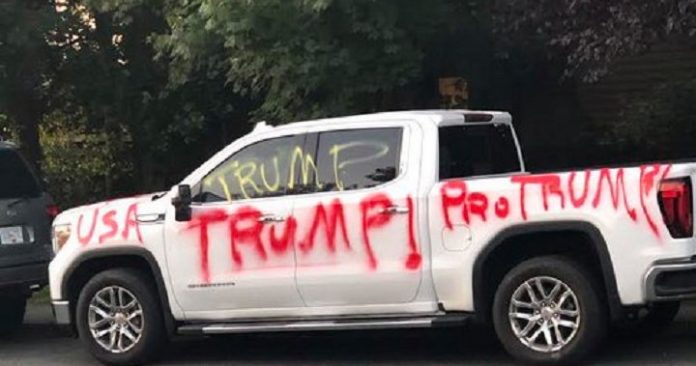 Police are investigating an incident of vandalism in Victoria, B.C., targeting a Canadian man with U.S. licence plates.

Keith Vidalin awoke Thursday morning to find his pickup truck, which has Texas plates, spray-painted with messages including “USA,” “Pro Trump” and obscenities.

Read more:
Owner of car with U.S. plates in Vancouver wants everyone to know they are Canadian

The licence plates were also stolen, and there was damage to the truck’s hood and windshield.

“You don’t expect this kind of trash to happen to you,” Vidalin told Global News.

“I thought people around here were a little better than that, but obviously some of them are not.”

He has been here for almost 3 months visiting family and helping us out. My wife and I just had a baby – his first grandchild and we just moved. He did his 2 week quarantine. He is Canadian and can’t even vote for or against Trump.

Vidalin lives and works in Texas, but is a Canadian citizen. He legally entered the country in June and completed the mandatory 14-day quarantine.

Both of Vidalin’s children attended the University of Victoria, and live in a house in the city.

“Part of this trip up here was to start retirement with another residence,” he said.

Victoria police said they were called to the home in the 1400-block of Mallek Crescent Thursday morning.

“This is unacceptable. We are investigating this file and hope that someone in the public has information regarding this incident,” said VicPD spokesperson Const. Cameron MacIntyre.

READ MORE: U.S. Air Force members in Winnipeg say they were attacked because of American plates

“People with out of country plates are here in B.C. for a variety of reasons and we need to be focused as a community on taking care of one another with compassion, rather than ignorance.”

The Canada-U.S. border has been closed to recreational visitors since March. However, essential workers, Canadian citizens who reside in the U.S., and close family members of Canadians are permitted to cross.

A Victoria man with Texas license plates had his truck vandalized overnight. He says he works in the states but came back to Canada in June (and isolated for 2 weeks) to be with his children and new grandchild. #yyj @GlobalBC pic.twitter.com/qFROUPyzpU

Despite this, there have been a number of anecdotal cases of vehicles with U.S. plates being targeted by Canadians concerned about the spread of COVID-19.

Those incidents even prompted B.C. Premier John Horgan to suggest that people with vehicles registered in the U.S. change their plates, take transit or ride bicycles.

Many locals have also expressed concern about Americans exploiting the so-called “Alaska loophole,” by claiming they are transiting to the northern state but staying in Canada to vacation.

The B.C. RCMP told Global News last week it had recorded fewer than a dozen such cases.

0:35
Owner of car with U.S. plates spotted in Vancouver clarifies they are Canadian

Owner of car with U.S. plates spotted in Vancouver clarifies they are Canadian

Vidalin estimated the damage to his truck will cost several thousand dollars to repair, and while he has insurance, he will be on the hook for the deductible.

He added that replacing the Texas plates from British Columbia will be difficult.

As for the vandals, he had a simple message.

“I’d love to meet you if you have the courage.”