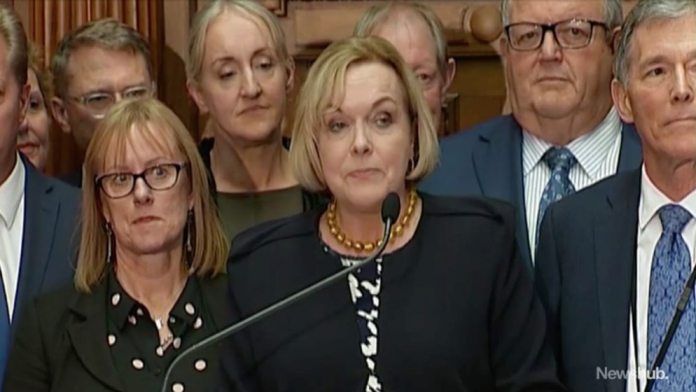 The selection of Judith Collins by her colleagues as the new leader of the National Party is a last minute throw of the political dice that might just save the Right from splintering at the upcoming election.

One of the problems of the political Left over the last 30 or so years is that it has been fragmented with voters under MMP choosing between Labour, Greens, TOP and Maori Party to name a few along with NZ First as a centrist party. Whereas the Right has, until now, been solidly National with a much smaller ACT party.

The resignation of Todd Muller yesterday may see a number of traditional National Party voters move to ACT this electio ,but the selection of Judith Collins as leader will certainly do much stem to that flow.

While Judith Collins is a person with very different political views to my own I have to say she is a skilled politician and front- footed last night’s press conference in a way that immediately confirmed Muller’s own assessment of himself that he was not the right person for the job.

For me however there was one particularly revealing economic policy moment when she was posed a rare and intelligent and searching question very late in the gathering.

“What would be your general approach over the next three years?” the unseen journalist asked.
“ Would you borrow more? Would you cut the spending would you raise taxation. Would you try to pay the debt back or would you leave it to roll down through the generations?”

To which she responded with a tension relieving joke before saying:

“It’s pretty obvious that the National Party is not the party of big taxes . We are the party of sensible spending ,we’re a party of infrastructure ,we’re a party that believes in investing .We’re not stupid with money because we always know that somebody has to pay it back and the last thing that we want is to leave a legacy for the next two generations to pay back on. These are the sorts of views that we are taking into this and that’s where we are always better than the other people because we know that we have to pay it back.”

I’ll have more to say about the economic policies of all the political parties in the coming days but for now I offer just a quick reaction.

That statement by National’s new leader reflects a pre-covid mentality. It reveals a mindset that pretends the economic world has not dramatically changed , that we are not facing a major recession which may become a deep depression.

Because during the Great Depression years of the 1930’s leaders like Franklin D Roosevelt and our own Michael Joseph Savage understood that in such times government spending is what saves an economy not penny pinching or leaving it to business to decide .

The new rules of the post -covid economy are only just forming. The longer the pandemic runs the deeper our economic problems will become.

Yesterday’s thinking which pandered to the vested interests of the few at the expense of the many isn’t going to cut it .

As for” leaving a legacy of debt “for the next generations and being” a party of infrastructure” – I invite you to reflect on how our schools and hospitals were run down under the last National administration and how, in the 1990’s, National Finance Minister Ruth Richardson cut the benefits – with the result that all the diseases of poverty which affect poor children the most all skyrocketed.

So in my view, last night the economic gauntlet has been thrown down .

Labour Greens and all the others now have to pick it up and clearly state why their handling of our economy will be different from the continued neoliberal approach to running it that Judith Collins re-articulated last night.

Bryan Bruce is one of NZs most respected documentary makers and public intellectuals who has tirelessly exposed NZs neoliberal economic settings as the main cause for social issues.