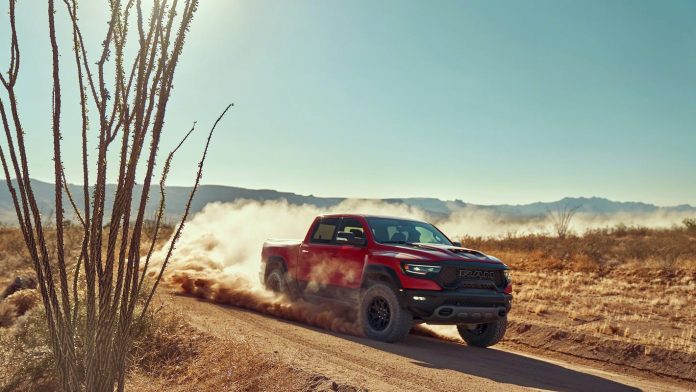 Vehicles like the Ram 1500 TRX pickup that debuted Monday are complex, boasting all sorts of controls, technology, machinery and materials. Yet in the beginning, the truck’s design came from a simple hammer.

It is a tool — literally and metaphorically — Ryan Nagode, chief interior designer for Ram truck, and his team use in the studio to help inspire and differentiate the models in the 1500 lineup. Each trim has a corresponding hammer. Nagode describes them as an extension of efforts that began in 2009 when the brand broke from Dodge to create its own identity and that of each of its vehicles.

The 2021 Ram 1500 TRX is the top-of-the-line high-performance vehicle with off-road capability. (Photo: Courtesy of FCA US LLC)

“At the end of the day, the truck was doing the same job,” Nagode said. “It has to work, haul, tow, essentially it has to be a tool itself, but we also have to bring the uniqueness to each level, and the beauty of the hammer analogy in that sense is it is consistent no matter its materials.”

The redesign of the Ram received accolades from industry observers, especially over its modern interior in comparison to minimal updates to the redesigned Chevrolet Silverado. The Ram in 2019 surpassed sales of the Silverado for the first time. The Silverado so far in 2020, however, has regained its second place in the truck wars behind Ford Motor Co.’s F-Series with about 20,000 vehicles between the Silverado and Ram.

The Ram 1500’s interior design team uses hammers as inspiration for the look and feel of each trim level of the pickup. (Photo: Courtesy of FCA US LLC)

The idea to use hammers as inspiration for the 2019 model year Ram redesign began in 2016. In designing earlier generations, the team had relied on image boards and lists of words to differentiate how the members thought about each model. But as new editions like the off-road Rebel, luxury Limited and now the high-performance TRX are added, something physical that the designer could reference and hold would be helpful, Nagode said.

“The layout of the truck, the bones per se, was established in the early stage, so we were in the refinement process, the fine-tuning process,” he said. “We wanted to look at the image and see the character and the uniqueness of the truck and work on that more.”

They discussed some different options, especially the sculpting tools in the studio. A wrench was another contender, but Nagode and the team kept coming back to the hammer for its power, its strength and its versatility. The team set out to find the right one for each model.

Ryan Nagode is the chief interior designer for Ram’s truck, commercial and performance vehicles. (Photo: Courtesy of FCA US LLC)

The Big Horn hammer began the journey. Its metallic details and cast texture inspired the polished finish and chrome accents in the vehicle.

“It started to bring the team together in the process,” Nagode said. “It created a singular path for everyone to follow.”

A sledgehammer represented the Tradesman work truck. The hammer for the Laramie Longhorn, which features leather seats and barnwood accents, came from Etsy.

“That speaks to the handcrafted feel to the interior,” Nagode said. “It was neat that we ended up finding that type of hammer on a craftsman type of website.”

The hammer for the luxury Limited vehicle was the most difficult to identify, he said. The team ended up finding the right fit from a mallet with a sleek black handle on a high-end craftsman’s website.

For the TRX, the top-of-the-line high-performance pickup with off-road capability, only the demolition hammer would do.

The 2021 Ram 1500 TRX’s interior got its inspiration from a demolition hammer picked up from a major hardware store. (Photo: Courtesy of FCA US LLC)

“The hammer story really plays out that this was really essentially made for demolition,” Nagode said. “And I think that’s fitting for what this truck is about. It’s a beast. … You’re getting out there and getting the truck and being the king of the hill.”

The red and black hammer reminiscent of the interior options came from a major hardware store. In all, the team has contemplated about 30 different hammers, selecting seven for the currently available trims.

Now amid the COIVD-19 pandemic when employees are working from home, the team does not have physical access to the hammers in the studio on a daily basis. But their images continue to be a guide as well as a way to communicate sensitive information about projects undisclosed to the public.

Nagode teased: “There’s a lot of hammers out there.”