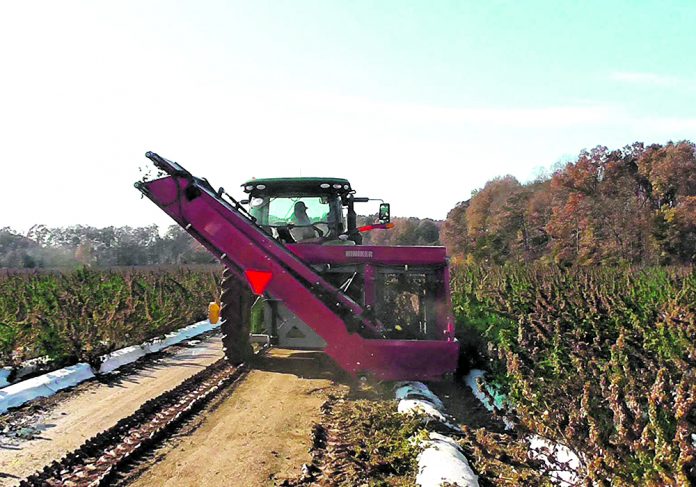 Hiniker’s CBD harvester was set to go, or so the company thought. Then came the farmer feedback.

“After we unveiled it there (at a farm machinery show last year) and got some farmers’ input we decided we were not going to bring that to market,’’ said Matt Morrison of Hiniker.

“Everyone had different ideas on row spacing, we had a sickle cutter, which people didn’t think would be robust enough. It was a little more expensive because it tended to be a three-row machine and it had conveyors going off of both sides.”

After the blunt farmer feedback, the company went back to the drawing board and designed a second prototype, and then a third, which it recently released to the market.

Hiniker’s CBD harvester is a one-row machine that requires a tractor with a category 2 or 3 hitch and a 1,000 r.p.m. power take-off.

The machine is built for row-crop operations, and when it’s lined up on a row it grabs cannabis plants with an auger system that pulls the plant into the cutter.

The auger system has floating ground support skids that enable a low cut.

Hiniker’s single row hemp cutter tips the scales at 6,500 pounds and needs about 26 gallon per minute of hydraulic flow, with the remainder of the implement being powered by a 1,000 RPM p.t.o. I twill cut down to 1.5 inches and handles stalks of more than four inches. | Hiniker photo

“We’ve got two 27-inch diameter p.t.o.-driven blade cutters that rotate, and basically they can cut anything. We were cutting plants that were two-and-a-half to three-inches wide in Kentucky this fall.”

There is an adjustable gauge wheel on the side that sets the cutting height.

The conveyor system was also changed on the latest model, because the round cannabis plants tended to roll back down toward the machine with the original system.

“What we did is we made a pinch conveyor that is fully adjustable. So depending on the size of your plants you can have it a little bit wider or a little bit narrower,” Morrison said.

He said a tractor with at least 150 horsepower is required for the harvester, largely so that it can handle the weight of the machine, and front weights may still be needed as the harvester weighs around 6,500 pounds.

When it comes to productivity, Morrison said it can harvest about 15 acres per day on 40-inch row spacing, traveling at 4.5 m.p.h.

The Hiniker also enables only two people to harvest a crop.

He said the CBD harvester was designed to cut and then gently convey the entire plant to the wagon.

Hiniker is designing another CBD harvester for larger scale producers who want to strip the leaves and buds off the plants and leave the stocks in the field.

“There is going to be a little more waste when you do that. But it’s geared towards the bigger farmers, the guys that don’t care if they have five percent waste, or something like that,” Morrison said.

Planning One Last Summer Hurrah? These 7 SUVs And 1 Truck...