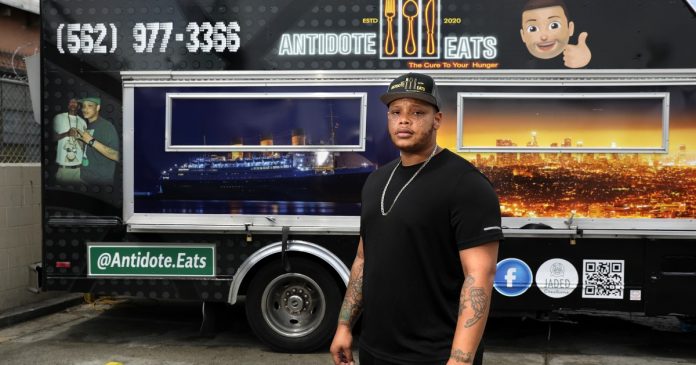 “Have you ever wrestled with someone and they put you in a chokehold?” Anthony Suggs, owner of the food truck Antidote Eats, asked me.

“Or like you’re messing around in the pool and someone is holding you down and you can’t breathe?”

“I want you to relate to that real quick. I’m gonna come back to it.”

In our conversations, Suggs, 30, is focused and relentlessly positive. He’ll tell you how he met Nipsey Hussle back in the day and that he wants to emulate the drive and business acumen of the rapper and entrepreneur who was slain last year.

Antidote Eats (Antidote was Suggs’ rap alias from his music days) is just a few months old, and the wrap on his food truck is tighter than a gift from Macy’s during the holiday rush. It’s decorated with photos of downtown L.A. and the Queen Mary — a tribute to Long Beach, where he grew up — along with images of Hussle and a Memoji of Suggs with his distinctive freckles.

Suggs owns the business together with his girlfriend, Jade Tanner, who created the menu. The food is comforting and homey: burgers, chicken sandwiches, sweet and savory crepes. The day the truck debuted, on a rainy Thursday in March, I pulled up outside a downtown dispensary and ordered a burger along with a berries-and-cream waffle crepe. I inhaled both. A steady stream of customers from the dispensary made for a profitable day and gave Anthony hope for his fledgling endeavor.

Three days later, Mayor Eric Garcetti announced a shutdown of bars and restaurants in L.A. due to the coronavirus crisis, crushing business industry-wide. Food is a hard vocation for anyone, and during a pandemic, it’s become nearly impossible. But Suggs’ story illustrates the even greater bind that black entrepreneurs are in — and the way systemic racism can turn it into a never-ceasing uphill climb.

Suggs describes his childhood as broken, spending years bouncing among foster and group homes in Long Beach and Compton, and surrounded by gang culture — though he says he never was actually in a gang. He was incarcerated for the first time at age 16 for second-degree robbery.

In 2014, Suggs was arrested on suspicion of selling marijuana to a police informant. He was ultimately sentenced to six years and eight months for the nonviolent offense and went to prison in early 2016. He bounced among facilities, ending up in a fire camp in Jamestown, Calif., east of Stockton. After marijuana was legalized in November 2016, Suggs appealed his case and was released in 2017, left to rebuild his world from scratch.

Prison, he said, numbs you to the realities and responsibilities of life.

“That’s the scary thing, that you get comfortable with being in jail,” Suggs said. “You don’t have to open a door, hold money. You forget what it feels like to hug a girl.”

African Americans are vastly overrepresented in California’s prison system. In 2017, 28.5% of male prisoners were African American, despite making up just 5.6% of the state’s residents, according to the Public Policy Institute of California. Their incarceration rate is 10 times that of white men.

L.A.’s beleaguered Social Equity program, launched in an attempt to repair the damage done primarily to low-income and nonwhite communities by the war on drugs, seemed the ideal way for Suggs to get back on his feet. Whites and blacks use marijuana at roughly the same rate, but blacks are almost four times more likely to be arrested on suspicion of possession, according to the ACLU. Those whom the criminal justice system had punished for marijuana, like Suggs, might be rewarded with a license to open their own dispensary. Around 1,800 applicants flocked to the site in September to get one of the 100 licenses available.

But there were problems. A total of 226 applicants were inexplicably allowed to access the first-come, first-serve online platform before the official start time of 10 a.m. Advocates cried foul, claiming that some folks had an unfair advantage — of the 100 winners, just 18 were African American, according to the Guardian. Suggs was No. 604 on the list — he didn’t get a license and ended up disappointed. “You think the government wants to help you, then they screw you over,” he said.

The irony of being sent to prison for selling marijuana on the street while Apple Store-like dispensaries make millions on it is not lost on Suggs.

Despite, or maybe because of his experiences, he talks a lot about manifesting good energy. “I went through a lot of adversity, and I still want to help people,” he said. “Every day is an opportunity.”

He sees food as an opportunity to promote unity in the aftermath of the coronavirus shutdown and massive nationwide protests sparked by the killings of George Floyd, Breonna Taylor and Ahmaud Arbery. “Food brings people together,” he said. “I want my customers to be like, ‘I’ve got to go back there’ because it’s so good. ‘I want to bring a friend to show them this good experience.’

“Food and weed are gonna be the two biggest bring-backs. Everyone has an experience with a meal where you remember where you were when you ate that meal.”

Suggs remains inspired by Hussle, who opened Marathon Clothing in 2017. “The way I can show that I’m gonna ride for him is to try to do the same thing he was doing. Focus on the business aspect,” he said.

The police and the institutions that are designed, in theory, to protect the citizenry are the things that keep Suggs — who was sentenced to prison for something that was, at the same time he was entering the system, being legalized and infused with corporate capital — on edge.

A couple of weeks ago, I met Suggs at a restaurant on Temple Street in Historic Filipinotown, near where he lives. He was nervous to meet on the street.

“I want to let you know how scary it is for me to even be sitting right here with you,” he said. “The people walking by — they could think that I’m a threat. They get on the phone and be like, ‘Let me call the police real quick, just to be sure.’” He then described the scenario that goes through his head every time he leaves his home.

“They [the police] come up and say, ‘Hey, what’s going on over here, guys? You’re a little fidgety man, you’re a little anxious.’”

“They run my name. ‘Give me your ID. Oh! You’ve got a history. You’ve been arrested for this, that, that. You got any weapons, any drugs?’”

“I was just having a conversation with you,” Suggs said. “And now I’m trying not to get shot.

Suggs plunged a significant portion of his savings into Antidote Eats — he paid almost $4,000 for the wrap, owes $2,200 per month for the lease on the truck and $1,000 per month to the commissary where he stores it. He’s been able to make ends meet by bringing the truck out periodically, but the shutdown has made things tight. He’s started flipping cars at auction to make some extra money.

The government’s Paycheck Protection Program, which has faltered in getting needed money to small restaurants and businesses in a timely and effective way, was no help. “You had to have a business bank account in February,” Suggs said. His truck didn’t debut until March.

He said he’d like to feed protesters but doesn’t feel safe going out. If he gets caught in a pocket of violence, he’s afraid he might lose the truck — if not to looters, then to police.

“This is why I’m scared to take the truck out,” he messaged me, alongside a post about beloved Louisville, Ky., barbecue figure David McAtee, who was fatally shot Monday as police and the Kentucky National Guard dispersed a large crowd. McAtee, who was 53, was known for feeding local cops for free.

“Now go back to the feeling I talked about underwater,” Suggs said.