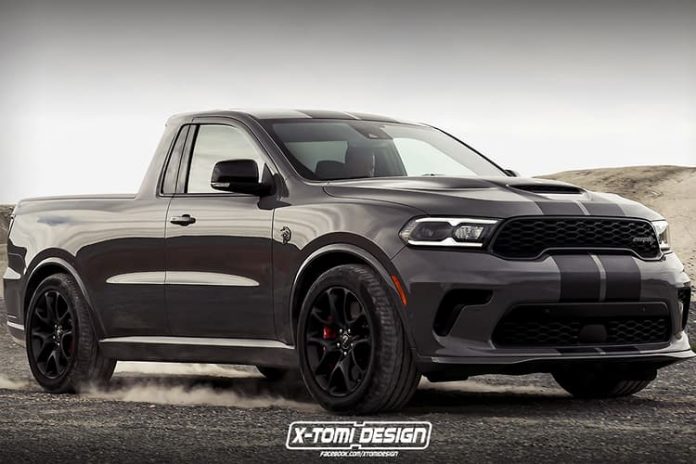 Meet the most powerful ute in the world… theoretically.

The team over at X-Tomi Design have come up with a head-turning take on the Dodge Durango SRT Hellcat SUV, and if this flight of fantasy became a reality it would become the world’s most powerful ute… at least until all the EV pick-ups arrive with their triple-motor madness.

Fitted with the same insane Hellcat supercharged V8 that powers the just-released Dodge Durango SRT Hellcat, this Dodge pick-up truck looks similar in size to a Ford Ranger ute – or perhaps a Ford Falcon ute would be a more appropriate comparison?

The road-going pick-up truck wouldn’t last long on a challenging off-road trail given its street tyres and lowered suspension, but its 6.2-litre supercharged V8 would give it the sort of muscle to outpace almost anything in the traffic light tango.

The Dodge Durango Hellcat rips to 100km/h in 3.6 seconds — matching the world’s quickest SUV, the Lamborghini Urus — so this 529kW/ 875Nm ute version stripped of weight would likely be even quicker.

Dodge’s ute brand, RAM, is set to release its Ford F-150 Raptor rival – the RAM 1500 TRX – very soon, which will also be powered by the same 6.2-litre supercharged V8. We’ll soon know which state of tune the engine will get, but it will most likely approach the Jeep Grand Cherokee Trackhawk with 522kW/868Nm.

There’s also the 594kW/959Nm version of the 6.2-litre blown V8 from the Dodge Challenger SRT Hellcat Redeye, and who could forget the Dodge Demon’s inexplicable 626kW/1044Nm outputs?

However, the RAM TRX will ride on jacked-up, fortified suspension to deal with sand dunes and rough terrain.

So will an all-new mid-size ‘metric-ton’ pick-up that Fiat Chrysler Automobiles is developing to rival the Ford Ranger and Toyota Tacoma in the US, and a top-shelf version of it too could be powered by Dodge’s Hellcat V8 — if emissions regulations don’t kill it first.

There is a precedent for mad road-based utes in the USA though, with vehicles like the RAM SRT-10 making use of the Dodge Viper sports car’s 8.3-litre V10 engine. It was a long-slung beast built in the mid-2000s and was offered with a four-speed automatic.

However, as more and more high-performance EV utes are being readied for production amid tightening emissions regulations – including the Ford F-150 electric pick-up – the days of the big-bore petrol-engined ute could be numbered.

Maserati will now fit all its cars with the 3.8-litre Ferrari...