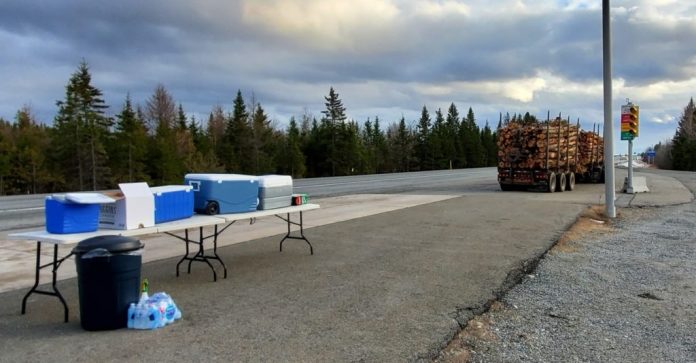 ROTHEASY, N.B. – It is a small group with a big heart.

And on Saturday, the five New Brunswickers were out on Transcanada Highway 1, handing out free meals to commercial drivers as part of their Help-a-Trucker – NB initiative.

“Day 1 went very well, we didn’t expect much traffic
being Easter weekend, but it was a good practice run for our team to make sure
we could follow all the proper procedures,” said Gino Dion, the man behind the program.

Dion and his co-workers from the telecom industry
launched the initiative to help truckers who are keeping the supply chain
moving in Atlantic Canada during the Covid-19 crisis. Also helping out is his
13-year-old son, Avery.

Dion said truck traffic on launch day was down by 90%,
but the group was still able to provide hot meals to many drivers.

There was a surprise, too, Dion said.

“We did have several people stop in to provide donations, which, honestly, we did not expect, but are very grateful for.”

Starting Tuesday, the group will serve up to 150 meals
every day.

The initiative is also aimed at helping the restaurant
industry, which is struggling under Covid-19 closures, Dion said.

“We basically approached a few businesses with our
concept, and luckily enough, they loved the idea and jumped in to support.”

Restaurants signed up for the program include Arby’s,
Boston Pizza, Kredl’s and Pomodori Pizzeria. Coca-Cola Canada is also a
partner.

To make sure the program is executed properly, the group is working with various government departments and the Atlantic Provinces Trucking Association, whose executive director Jean-Marc Picard has called the initiative “incredible”.

“But we are committed to keeping this going for as
long as we have the funds to do so,” Dion said.

For more details on how to participate in the program,
click here.