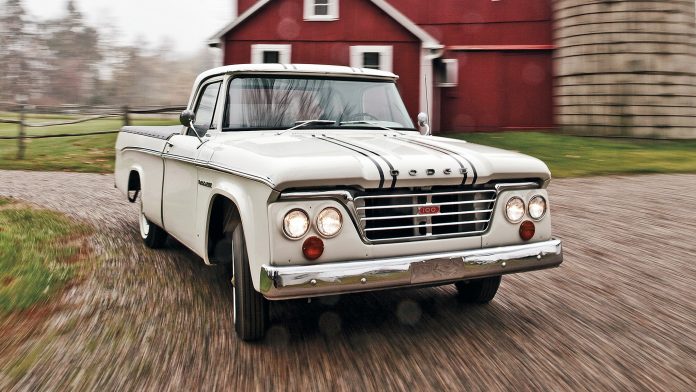 THESE DAYS, factory hot-rod pickups are as commonplace as rock stars wearing guyliner, but all of them owe their heritage to the specially equipped Dodge D-100 Custom Sports Special you see here, which debuted in 1964—eight years before Ziggy Stardust painted his face. Yes, in the same year designer Mary Quant changed the fashion world forever with the miniskirt, Dodge attempted to upend the pickup-truck status quo by introducing a “personal-use” maximum-performance model of the D-100—a Hemi-powered hot rod truck lavishly trimmed with bucket seats and a console.

Perhaps some spark of inspiration came from San Diego DJ Dick Boynton’s success racing his 1963 Dragmaster truck, a Dodge D-100 powered by a 413-cubic inch 420-horse Max Wedge engine that won its B/FX (factory experimental) class at the 1963 Winternationals in Pomona by laying down a 12.71-second, 108.99-mph run. That’s impressive for a 3,900-pound truck carrying 70 percent of its weight up front. Soon the 413 became a factory special-order option as part of a High-Performance Package. HPP included a 360-horse Street Wedge four-barrel dual-exhaust 413 (superseded in early 1964 by a 365-horse 426), a push-button 727 LoadFlite three-speed automatic, heavy-duty springs, traction bars, power steering, and a gauge package with a 6,000-rpm tach.

The HPP option cost a whopping $1,235—67 percent of the base price (about $8,700 in today’s money). To order it, buyers had to pay in full for the truck in advance, without Chrysler Corporation financing. And while the marketing literature touts its availability, management capped total production at 50 trucks sold and built over three model years. That’s probably because there was little or no profit in it, due to the high degree of hand fabrication involved (custom brackets were made to attach the Imperial/300 traction bars to the rear axle, a frame crossmember had to be torched out and replaced with brackets, the firewall had to be dented for exhaust-manifold clearance, etc. ).

But there’s way more to the story than that dragstrip drivetrain. The pickup world had been gradually shucking its farmers-and-contractors-only image for several years. Chevrolet’s mid-1955 introduction of the smooth-sided and chrome-bedecked Cameo pickups marked a first attempt at serious gentrification. Ford and Dodge responded in 1957 with their Styleside and Sweptside truckbed designs respectively, the latter of which involved Dodge slapping an ill-fitting two-door station wagon quarter panel onto the existing pickup bed through January 1959. These classier trucks looked more at home in suburban neighborhoods and vacationland campgrounds, sporting in-bed campers or towing trailers. We noted this trend in an October 1964 RV feature, attributing a boom in comfort-oriented light truck sales to skyrocketing camper sales (up 28 percent between 1963 and ’64).

Dodge upped its pickup game for 1961 with an all-new design that included the option of a properly integrated, full-width Sweptline bed (available since mid-’59) as well as stronger frames, increased track width, plus longer and wider leaf springs and Oriflow shocks at all four corners for better ride and handling. To attract new customers to the segment, Dodge offered a comfort-and-style oriented Custom Sports Special package in 1964, priced at $235. The package included black vinyl bucket seats borrowed from the Dodge Dart GT, a center console from the Polara, dual armrests and sunvisors, a fully carpeted floor and gas tank, chrome bumpers and grille, and racing stripes up the hood and cab. The CSS package could be ordered with a variety of engines, any bed (or chassis-cab) configuration, with rear- or four-wheel drive on half- or three-quarter ton trucks in 13 colors.

The lucky few who sprang for the magic combination of CSS and HPP bought the great-granddaddy of every Ram SRT-10, Ford F-150 SVT Lightning, or Chevy Silverado SS454 pickup—and at a pretty good price. Typically equipped, they went for around $3,500, less than $25,000 in today’s money. The original owner of this pristine example was a gentleman farmer who loved to street-race his buddies on rural backroads. Lore has it that the dealer or factory somehow botched his paperwork and, instead of what he ordered, an identical-looking Custom Sports Special arrived with a measly 230-horse, 318-cubic-inch V-8 instead of the mighty 426. The dealer apologized profusely and allowed him to drive the 318 while the 426 was reordered. He never mentioned this bureaucratic bungle-up to his streetracing pals, allowing them to beat his supposed Street Wedge beast. Then when the real thing arrived, he told them he’d been tinkering with the carburetor and asked if they would give him one more shot. This time, of course, there was no contest. (He was reportedly good enough not to claim any pink slips.)

A surprising number of these original High-Performance Package trucks have remained in the families of their original owners, including Benjamin Simons’. His folks stretched to buy their $3,420 truck (eschewing the CSS frippery) and racked up 450,000 miles on it, crisscrossing the country with a bed capper and a camping trailer in tow. Ben fondly recalls riding with his mom or dad (they both had lead feet) when some musclecar would stop next to them at the light. They’d press the “1” button on the transmission selector, and it was game on. Their sleeper pickup shamed its fair share of GTOs, Fairlane 390s, Corvettes, and the like, and was once clocked by a Florida Highway Patrol aircraft at 130 mph. The trooper on the ground refused to write the ticket, disbelieving such a plain-Jane truck could go that fast. Those were the days…

Our ivory Custom Sports Special test car was lovingly restored by its current owner, the Walter P. Chrysler Museum in Auburn Hills, Michigan. Climbing aboard, it takes some reminding that this was among the poshest pickup trucks on the market in 1964, given the sybaritic standards set by today’s Laramie Longhorn, King Ranch, and Denali trim grades. Most of the interior is painted metal, including the door-access panels, which are (correctly) bright white—as jarring a mismatch with the ivory as the mocha brown door armrests are against the black seats (also correct). That unique 6,000-rpm tach doesn’t match the other gauges either, and the (optional!) turn signal stalk can’t be reached without removing a hand from the steering wheel. There’s not much “bucketing” to these thrones, but they’re nicely padded, and the huge console offers plenty of storage. The rattan headliner is a nice touch, coordinating nicely with summer cowboy hats. There’s no inside rearview mirror, as the regulation stipulated only two mirrors, and each door got one to ensure visibility should the rear window be obscured by a load.

The big block fires instantly and settles into a delightful lope. A bit of “stiction” in the throttle linkage makes it nearly impossible to roll away from a stop without spitting gravel from the tall, narrow bias plies while parading for the camera at a suburban Detroit horse farm. The steering feels as if power assist was simply added to a manual gear, and with five turns lock to lock, it’s astonishing how much input is required to negotiate the gentlest of bends. Keep flailing, however, and it turns tight enough to negotiate a U-turn on a two-lane road with ample shoulders. The brake pedal travels some distance before the manual drum brakes kick in, but they feel strong and are easily modulated. Ride quality is in keeping with half-century-old solid-axle, leaf-sprung technology—purposeful but not overly harsh. A brief spin on the paved roads around the WPC Museum the next day reveals the challenge of routing 470 pound-feet of torque through two hard contact patches that are 4.25 inches wide each. Feather the gas through most of first gear to prevent total tire immolation, and dither it again at the 1-2 upshift or risk another big dose of wheelspin. But, wow, does that bellowing Wedge sound sweet drowning out the Goodyears’ squeals for mercy.

After way too little of this hi-po hooliganism, the rising shriek of an unraveling speedometer cable joins the chorus, cutting the test drive of this historic factory muscle truck short. But it’s been enough D-100 426 seat time to paint a smirk on this face that mere cold cream could never clean off. (Editor’s NOTE: This story originally appeared in the Spring 2011 issue of Motor Trend Classic).

BENJAMIN SIMONS is a Web designer and photographer for the University of Florida school of business by day, and an oracle of Sweptline high-performance truck information by night.

WHY I LIKE IT: “I came home from the hospital in this truck and grew up with it, taking innumerable family camping vacations in it.”

WHY IT’S COLLECTIBLE: Only 50 Street Wedge Sweptlines were built, and they’re historically significant as the first factory high-performance pickups.

RESTORING/MAINTAINING: New or repro parts for Dodge pickups of this vintage are nearly nonexistent, so find a good truck or an ace body shop and fabricator.

BEWARE: Quick-rusting footwells, cowls, and door edges. Valve covers are unique to the trucks, and are ultra rare, as are the hand-fabricated rear axle traction-bar mounts.

THEN: “Acceleration, even with the rather conservative 318 engine, wasn’t just brisk—it was pleasantly alarming. Tires chirped at the shift from low to second, even on normal starts. Coupled with the light body and heavy-duty suspension components, the Palomino offers a maverick choice. “—Carl Isica, Motor Trend, April 1964

NOW: In terms of power, performance, engine note, and handling, Dodge’s Street Wedge D-100 is every bit as much a “muscle truck” as any ’49 Rocket 88 or ’64 GTO is a musclecar—it’s just a whole lot more interesting because there are so few of them.

At about the same time Boynton was tearing up the West Coast with his Max Wedge Dragmaster, a purpose-built Ford F-100 “unibody” pickup was tearing up the Eastern U.S., outfitted with a 425-horse Galaxie drag engine running twin four-barrel carbs, a Borg-Warner T-10 transmission, a heavily modified suspension, and 4.86:1 gearing. Dearborn Steel Tubing, which pitched in on many Ford Racing programs, engineered and built one truck and published marketing material touting the XL as a dealer-orderable option package, converted at DST and priced at $3,400 above the base truck. This literature claimed the F-100 XL was unbeaten in 16 starts running in the same B/FX class as the Max Wedge Dodge with nearly identical quarter-mile runs of 12.72 sec at 108 mph. Sad to say, the two trucks never met and no more F-100 XLs are believed to have been built.

Five Civilian Armored Vehicles for Your Escape into the Wild