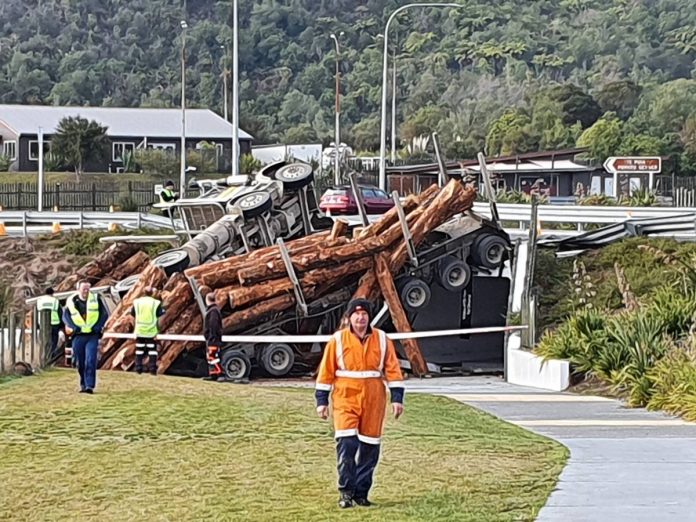 A call for submissions on speed limits on State Highway 30 and 5, including at the Hemo Gorge roundabout, comes days after a truck rolled at the roundabout.

Diversions were needed while the truck was recovered and logs cleared off the road after the crash at 7.50am last Saturday.

She said the team was not only grateful he was alive and that no one else was involved but also for the support of the community and emergency services at the scene.

“There were two young girls who saw the accident and they stopped but they couldn’t do much in terms of getting him out of the cab. But they waited and made sure everybody was okay, it was really nice of them.”

Scheepers, who was in a truck behind the one that rolled, said in that moment she felt helpless.

“It was quite scary.

“But the support from all of the emergency services was outstanding.”

Unrelated to the crash, Waka Kotahi NZ Transport Agency announced on Monday it was welcoming submissions on the speed in the area, including State Highway 5 from south of the roundabout to State Highway 30 south of Rotorua airport.

Regional relationships director Steve Mutton said the state highways were used for everything from commuting to freight and tourism. Planned developments meant they were only going to get busier.

“Changing speed limits to ensure they are safe and appropriate is one of the best things we can do to help prevent deaths and serious injuries.”

Agency Bay of Plenty system manager Rob Campbell said the agency would await the outcome of a report into Saturday’s crash before commenting.

He said a team was repairing the barrier and damaged road surface.

“An engineer’s assessment of the underpass was carried out confirming no structural damage.”

The organisation last year spent more than $27,000 fixing damage caused by a logging truck that spilled its load across the Hemo roundabout in August 2018.

Campbell said the design and construction of the roundabout and underpass underwent safety audits and met current engineering standards.

Road Transport Forum chief executive Nick Leggett said he could not comment about Saturday’s crash because he did not know the specifics of the particular roundabout.

However, he said generally, roundabouts were safer than intersections.

“Camber is not an issue generally speaking and drivers need to adjust their speed at roundabouts.”

Leggett said trucks and their trailers were designed to meet a specified level of rollover resistance, which had improved truck safety dramatically.

“Exceeding the speed for any manoeuvre comes with risks.”

Rotorua Lakes Council infrastructure group manager Stavros Michael said he would wait to hear the results of the investigation before he discussed any considerations with NZTA.

“As with any incident we are glad no one was injured on Saturday.”

11-year-old boy, caretaker, killed after being struck by pickup driver in...