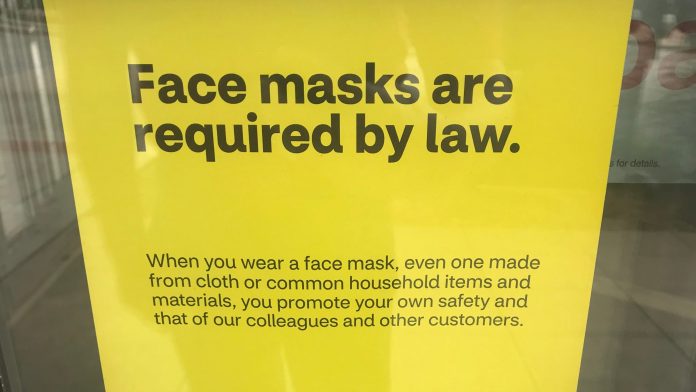 Crystal Tuminello of Greenville got out of her car Tuesday afternoon and walked toward the front entrance of the Publix Super Market at McBee Station in downtown Greenville. When she saw the sign on the door that said, “Masks on, please,” she turned around and walked back to her car.

There, she donned a blue surgical mask, one that she’d just picked up at the doctor’s office, and returned to the store.

“I’m actually not used to wearing the mask,” Tuminello said. “I haven’t really been wearing it, honestly.”

So it went for many grocery store shoppers in Greenville on Tuesday on the first day after the city enacted an emergency ordinance that requires customers of grocery stores and pharmacies in the city limits to wear masks in an effort to stem the rising tide of coronavirus cases in Greenville.

Mask or maskless: The politics of measuring individual responsibility in South Carolina

One man walked into the Publix a few minutes later not wearing a mask, then turned around walked out, got in his truck and left.

A sign on the door of the Publix Super Market at McBee Station in Greenville on the first day Greenville’s mask-wearing requirement went into effect. (Photo: Nathaniel Cary/STAFF)

But mostly, shoppers wore their masks to the store or put one on that an employee sitting right inside the front entrance, handed out.

Marie Jones works as a driver for Instacart grocery delivery service and said she’s required to wear one by the company. The mask policy didn’t change anything for her, but she said she’d noticed how lax Greenville had become with wearing masks compared to other places like Richmond, Va. where she just moved from.

“I had people come last week and they were terrified because so many people were walking around with no masks and they just wasn’t used to that because in Richmond, everybody wears a mask,” she said. “They won’t serve you in the stores if you don’t have a mask.”

Evidence of the new mask policy was evident at grocery stores and pharmacies across Greenville on Tuesday. At CVS Pharmacy on Main Street yellow paper signs taped to the sliding doors proclaimed, “Face masks are required by law.”

“When you wear a face mask, even one made from cloth or common household items and materials, you promote your own safety and that of our colleagues and other customers,” the sign read in English and Spanish. Similar signs were set up just inside the entrance to the CVS on Augusta Road.

A sign on the door of CVS Pharmacy on Main Street in Greenville the day the city’s new face mask requirement went into effect. (Photo: Nathaniel Cary/STAFF)

The City of Greenville passed its emergency ordinance unanimously on Monday night as Greenville County continued to lead the state in the number of confirmed coronavirus cases. By Tuesday, the county has 3,822 total confirmed cases and 75 people had died in the county, according to the state Department of Health and Environmental Control.

The city set civil penalties of $25 to $100 per infraction for violators.

Scott Thigpen pushed his grocery cart to his truck in the parking lot of the Publix store at McAllister Square. He doesn’t own a mask and didn’t like that he had to wear one given to him by a Publix employee stationed outside the store.

Though Thigpen said he’s practicing socially distancing and whipped out a bottle of hand sanitizer to show a reporter he’s taking precautions, he said he bucked against the government telling him he had to wear a mask.

The city of Greenville began to deliver 50,000 masks to stores and businesses in the city Tuesday as part of its new policy. Those who accepted the masks were required to sign the Greater Greenville Pledge, a commitment by businesses to monitor employee health, clean high-touch areas frequently, wear masks, wash hands frequently, limit the number of customers and promote social distancing.

Dana Lowie, owner of Coffee Underground and of World Piece, said the mask ordinance may help her when it comes to ensuring her staff wear their masks, which she had already set as a policy. Now she has an ally in the decision, she said.

The masks are a good way to get the virus under control in a less economically devastating way, Lowie said.

“It’s not going to be forever and we gotta get the curve under control,” Lowie said.

The new policy caused some Greenville restaurateurs to made sudden shifts in practices just weeks after making reopening decisions.

Charlie McMullen initially polled customers about masks and gloves when he reopened his Augusta Road restaurant a month ago, and most said they didn’t want his employees to wear them.

Had they said the opposite, McMullen said, he would have worn them.

Now, the owner of the Blockhouse Restaurant, which has served the community for 39 years, feels frustrated at the mandate to do something he feels at least his customers don’t want, but he said will comply with the mandate.

But he added that masks do interfere with the whole escape of dining out.

The new policy caused Greenville couple Stacy Lewis and Gavin Beamish to briefly reconsider whether to go to Harris Teeter to grab a couple slices of pizza, though they eventually strapped on masks and went anyway.

But she’d started to wear one again this past week once she saw that cases were spiking in South Carolina. She’d come to Harris Teeter Tuesday because she saw employees all wearing masks on a previous trip and thought she may be safer shopping there.

“We have informed our store teams about the new requirement, and we are in compliance,” Robinson said. “Harris Teeter strongly encourages our shoppers to wear masks to protect themselves, their families and our valued, frontline associates.”

Roy Miles stood outside Harris Teeter on Augusta Road holding a bag of groceries and wearing a blue surgical mask while he waited for his ride. He’d worn a mask “every now and then” but said he was glad for the new policy.

“I’m glad because a couple years ago I had pneumonia,” Miles said.  “It’s a good idea. Super idea.”