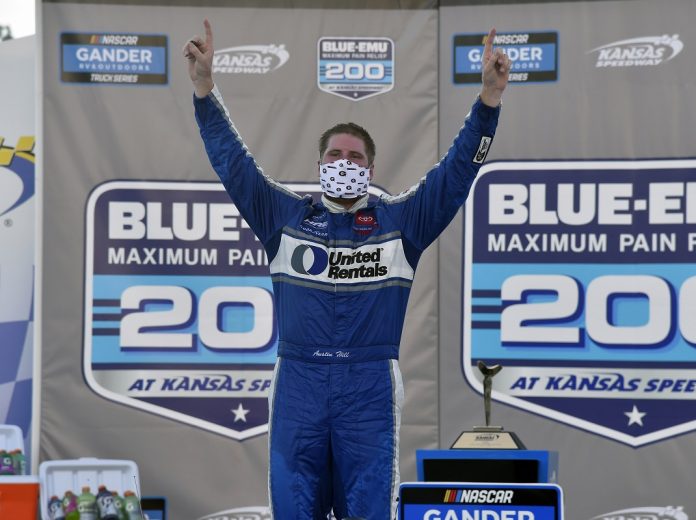 In a redemption drive from the June race at Atlanta Motor Speedway where Hill was passed for the lead on a late restart, the Winston, Ga., native left no doubt this time around.

He won stage two handily, then topped a back-and-forth battle with Matt Crafton and Brett Moffitt following the final caution of the race on lap 82, after Korbin Forrister tagged the wall on lap 82.

Once racing resumed for good on lap 88, Hill took the point at the stripe before being edged out by Crafton on lap 89. Hill countered to regain command on lap 90, but that pulled Moffitt into the fray.

Moffitt dove underneath Hill in turn one on lap 92, leading for four circuits, but once Hill found another gear on the 93rd lap he was off to the races and on his way to victory lane with the No. 16 Toyota Tundra.

It marked Hill’s fifth career Truck Series win. He beat runner-up Moffitt to the checkered flag by 2.928 seconds after leading four times for a race-high 65 laps.

“This is awesome,” said Hill in victory lane. “We’ve been working so hard. This season we’ve been running really consistent. Last week was a bummer with having engine troubles, and I told the guys before coming here, ‘we finished fourth here last year, so let’s go finish three spots better,’ and I’ll be danged if we didn’t go and do it.”

Of course, that didn’t mean that what happened at Atlanta wasn’t on Hill’s mind at the end.

“Man, those last 20 laps felt like forever. I wasn’t sure if I was ever going to get the white flag,” Hill noted. “I just kept thinking, ‘OK, when’s the caution going to come out?’ And I started thinking, ‘what am I going to do when the caution comes out? Am I going to choose outside or inside lane? How hard do I drive it into the corner with older tires?’ Just a lot of things were going through my head, but I’m glad we didn’t have to do a green-white-checkered. I’m glad that it ended like it did.

Chase Purdy, who crossed the line 15th Friday evening, will lead the field to green for Saturday afternoon’s 200-mile Truck Series race after an inversion of the top 15 finishers.

To view complete race results, advance to the next page.

Port of Montreal job action to run until Friday – Truck...