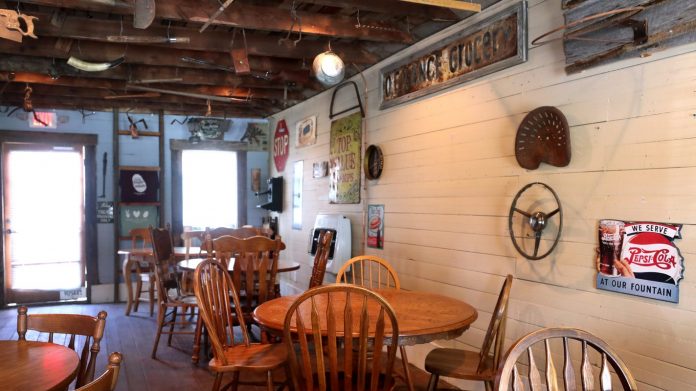 On Saturday from 4-7 p.m. the doors will reopen as The Fried Tater Cafe, a meat-and-three restaurant that is a dream come true for owners Melissa and Elijah Wright. The grand opening will feature live music and a meal at $20 per adult and $10 per child.

“It is exactly what my dad would have wanted,” said Melissa Wright, who planned to open a restaurant or food truck with her father before he died five years ago.

So when the historic building went up for rent last fall, Melissa jumped at the chance to open a restaurant.

Elijah and Melissa Wright have been working hard to renovate an old store in Rockvale for their new restaurant The Fried Tater Cafe’. The couple stands in the small dinning area of their restaurant on Thursday, Sept. 10, 2020. The grand opening will be on Saturday Sept. 12, with an outdoor concert, to accommodate as many as 2,000 people.  (Photo: HELEN COMER/DNJ)

“When we’d pass here she would say, ‘I’d love to turn this into a meat-and-three,'” said Elijah Wright.

Fried Tater Cafe’s made-from-scratch, locally sourced menu will consist of an array of rotating meats and vegetables. Daily staples will include beans, cornbread and, of course, fried potatoes.

“Some of the recipes are family ones. The fried potatoes will be the way my mama and my dad always made them — fried with bacon grease and butter,” Melissa said. “And my ‘mash-and-swaller’ fried chicken that is so tender, it just falls to pieces.

“But I’m not gonna tell you that recipe,” Melissa added, laughing.

She’s also holding her carrot cake recipe close to her heart. It will be the best you’ve ever had, she promised. And she’s going to be serving up homemade cobblers and freshly baked Christie Cookies.

The store in Rockvale that has been different buisnesses over the last few hundred years will once again open it’s doors to be the newest Rockvale restaurant The Fried Tater Cafe’. (Photo: HELEN COMER/DNJ)

Inside the old general store is decor reminiscent of its former purpose, with original exposed wooden plank walls and floors, a hodgepodge of kitchen tables and chairs, and vintage signs — including the original Versailles Grocery marquee.

Melissa plans to add some merchandise for sale as well, although she’s already got The Fried Tater Cafe T-shirts on sale: “peace love and taters” and “don’t be a tater-hater.”

The restaurant is quaint with a seating capacity of 25. Because it’s small, the Wrights will offer quick-grab items, to-go meals and family packs as well as a dine-in option.

They had to improvise with the kitchen due to the building’s size. So food will be prepared in a 22-foot food truck behind the restaurant with meals served cafeteria-style from the front.

Even after Saturday’s performances, the Wrights plan to host a regular roster of musicians on stage in the 5-acre field behind the restaurant with parking across the street in a 15-acre field. Ties to the country music industry will help fill the lineup with top-notch performers, Melissa said.

Getting the restaurant up and running has been a challenge, but support from the community has been “overwhelming.”

‘A piece of Rockvale’ returns

“We’ve had so many people excited we’re bringing back a piece of Rockvale,” Melissa said.

Named for the palace of Louis XIV of France, the community known as Versailles (pronounced locally as ver-sales) began in the early 1700s as a place where French fur traders did business with indigenous people.

Edwin Nance, whose father once ran the Versailles grocery, said the original two-story building was erected there in the 1840s by his great-grandfather, Frank Nance. The first floor of the store eventually burned and the structure you see today was once the second level of that building.

The building has also served as a post office and polling station, and Elijah said he heard soldiers signed up to join the Civil War there.

A few years ago the owners renovated the building, although it remained vacant until last year when the Wright family began work on the restaurant last fall.

Elijah said a lot of people have stopped by to share memories of the store. Some get emotional.

“They really get emotional. It’s a really neat experience to see the community and how they’ve welcomed us,” Melissa said.

Fried Tater Cafe is located at the convergence of Versailles, Concord and Hidden Valley roads, less than 2 miles off New Salem Highway in Rockvale.

The restaurant will be open Wednesday through Sunday. Hours for Monday through Friday will be 6:30-10:30 a.m. for breakfast and 4-8 p.m. for supper, and 8 a.m. to 2 p.m. Saturday and Sunday brunch.

Grand opening celebration is 4-7 p.m. Saturday. Tickets are $20 each for adults and $10 for children, and includes entertainment as well as food.

Check out restaurants that have opened between January and August 2020 in Rutherford County, from sweet eats to seafood.

Reach reporter Nancy DeGennaro at degennaro@dnj.com and follow her on Twitter @NanDeGennaro. Keep up with restaurant news by joining Good Eats in the ‘Boro (and beyond) on Facebook.