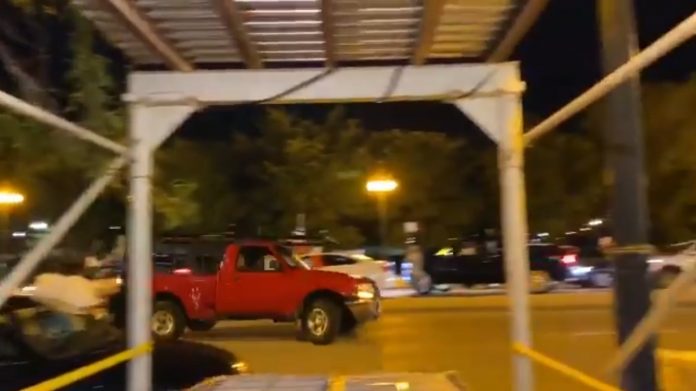 CHICAGO (CBS) — Police Wednesday evening were searching for a man after a hit-and-run that left a woman injured at a South Loop bus stop.

It happened during the Mexican Independence Day Parade along Michigan Avenue around 11:45 p.m. Tuesday. Several people witnessed the moment, including CBS 2’s Marissa Parra, who was filming when it happened.

As Parra stood on Michigan Avenue at 11th Street, traffic was blocked in both directions as people sat on top of cars and trucks – celebrating and honking their horns.

Suddenly, a red pickup truck on the other side of the street jumped the curb – almost hitting several people including Parra before ramming into the bus shelter.

A 61-year-old woman was sitting inside the bus shelter at the time.

Everyone heard the pickup truck’s screeching tires as it swerved moments before driving into Dorothy Sterling. We will not be showing you video of the impact, but we did show you video of the moment the driver backed up and stalled for a few moments and then sped away.

Meanwhile, Sterling was left bleeding in the bus shelter where she had been sitting.

“He definitely knew,” said witness Gage Ruport. “He took off and he knew he was going to be in trouble.”

The red pickup truck was among the cars whose drivers were revving their engines in the Mexican Independence Day Parade.

The official parade in Little Village was canceled due to COVID-19, but that didn’t stop the party on the streets of downtown Chicago over the last few days.

As midnight approached Tuesday night, the sound of fireworks and honking horns echoed in the city. Several cars were spinning their tires on Michigan Avenue in the South Loop, causing a smoky haze, when the red pickup truck driver began to drive erratically.

“He was driving on the sidewalks. He was driving backwards down the wrong way,” Ruport said. “That’s when all the beer bottles fell out of the truck and shattered on the ground.”

Happened feet away from me, I cut the video off before it hits her for graphic purposes @cbschicago pic.twitter.com/T2a3CE7jn5

As the driver moved toward Sterling, who was sitting alone at the bus stop, she put her hands out as if to try to stop him. But she wasn’t alone for long after she was struck.

“People were trying to keep her conscious because she looked like she was starting to doze off, considering the amount of blood we saw on the ground,” said witness Alex Yeager.

Among those who rushed to Sterling’s side were two women who had been in the parade. They took a Mexican flag off their shoulders to use as a tourniquet to stop the bleeding.

A source told Parra some police officers have had their time off canceled for Wednesday night due to what we saw amid the Mexican Independence Day celebrations.

Late Wednesday night, there were large caravans of cars at Madison and Canal streets and on Columbus Drive. Police were patrolling the area and shut down several streets.

Sterling was taken to Northwestern Memorial Hospital. We are told she might lose her leg, but she is expected to survive.

A new Spotz for summer

General Motors’ Deal With Nikola Could Double Its Stock Price