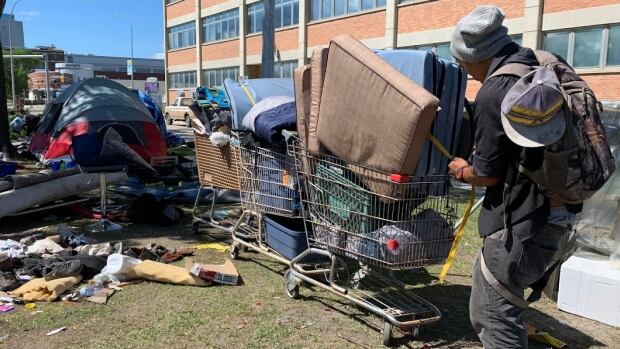 Alwyn Cowley strained to pull a train of linked shopping carts loaded with tarps, sleeping bags, extension cords, couch cushions, and plastic storage containers, and tried to figure out where he was going.

“I don’t know. Wherever my feet go, I guess,” he said Friday, as he cleared out of the homeless encampment he’d been living in for more than a year near Winnipeg’s Disraeli Bridge.

Cowley was among a couple dozen people pulling down tents and makeshift shelters and slowly packing up their belongings, after being issued a formal order earlier in the week by the City of Winnipeg Wednesday to vacate the camp.

Robert Russell, a camp resident who has become an advocate and spokesperson for the group, said the mood for the most part was upbeat on Friday.

“We’re moving forward on moving out of this location,” he said, adding people have identified a couple of places to go.

A large metal dumpster was stationed at one corner of the site, at Henry Avenue and Disraeli, for people to toss anything they didn’t need and for a larger cleanup once everyone had left — whenever that might be.

Campers were asked to be cleared out by noon, but that was more of a guide than a deadline, said Mark Reshaur, assistant chief with the Winnipeg Fire Paramedic Service, who stood watch.

“We want to give them the space they need,” he said.

“No one is coming in to scrape the site clean. We are here to offer support and make sure they understand what the safety concerns are that led us to this point.”

The encampment had become overcrowded, as was a secondary one around the corner at Austin Street and Henry, which was cleared out and sealed off by temporary fencing by Friday.

Some tents were tightly clustered and then wrapped in other material, creating a dangerous situation in the event of a fire.

The sites were also littered with propane tanks and gasoline generators, as well as other flammable items. While some people had nylon tents, others had improvised shelters made of pallets and foam board.

“We spoke to the Winnipeg Fire Paramedic Service and they said they wouldn’t be able to get a fire truck out the door before the entire camp would be gone,” said Rick Lees, executive director of the Main Street Project, which provides shelter and other services to the homeless.

The Austin and Henry encampment had two fires Wednesday.

Lees said he and others had conversations about clearing out the camp with residents, who requested the formal notice as a sign of respect. It was the residents who suggested a three-day deadline would be appropriate, he said.

“It’s the residents’ timeline and our job is simply to make sure they’re safe and have access to all the supports they need,” Lees said.

Asked what happens if people refuse to leave, Lees said “we’re having those discussions now.”

As the sun beat down early Friday afternoon, Main Street Project staff supplied water and food. They also provided residents with large packing boxes and offered to store them.

Main Street also gave out new tents in exchange for people dismantling and leaving behind combustible shelters. Lees knows people will set up elsewhere, and hopes they better understand better the precautions they need to take.

“This is about keeping people safe, that’s all,” Lees said. “We don’t want people to die. What we’re trying to share with these folks as they move is education.”

A new camp had already sprouted Friday across the street, in front of Argyle Alternative High School. Glancing at it, Lees was pleased by how spaced apart the tents were.

He also said Main Street Project’s main shelter, situated between the two camps, has washrooms and shower facilities open for anyone who needs those.

As well, its new shelter in the old Mitchell Fabrics building on Main Street is expected to open within a week with 120 beds.

Russell lauded the shelter system, but said most shelters lack storage space for the belongings homeless people carry everywhere, which means they have to leave their possessions somewhere while they sleep inside.

In the morning, they have to retrieve their belongings and carry them around all day.

An encampment is a home, and gives people an opportunity to look for work without hauling everything around, he said.

Other options — cheap rentals or inner-city hotels — are usually poorly maintained, infested with cockroaches and mice, or have doors and windows that don’t lock, he said.

“The [owners] all have the same ideology: we don’t have to do shit and we’ll still get paid,” he said.

“And no one is going over there and saying ‘if you don’t clean up we’re shutting you down in three days.”

Motorcyclist Airlifted To The Hospital After Highway 97 Crash With Pickup...

Pickup rolls downhill and hits car and house in Saanich

We Can’t Stop Staring At These Modified Pickup Trucks