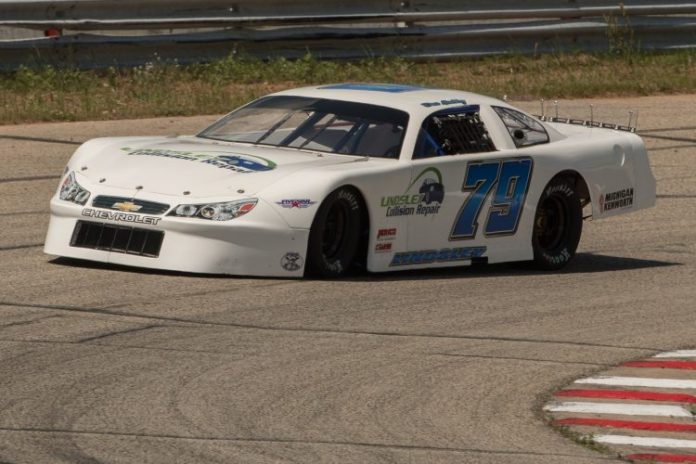 For The Daily News

NORWAY TOWNSHIP — After two consecutive weeks of cancelations due to rain, the Norway Speedway was finally able to return to action to cap off its 2020 season with an action packed day of racing.

Of course, the final race of the season wasn’t without a weather postponement from Sunday afternoon to Labor Day.

For the last five years, the name of the Norway Speedway late model champion had remained unchanged as Dillion Kralovetz claimed championships 2015-2019. Fittingly, the driver who wrapped up the title in the final week of the season, Dan Lindsley, was the last driver not named Dillon Kralovetz to win the title.

Lindsley won the title in 2014 and adds title number two to his resume with the 2020 championship, which he claimed by simply starting the motor.

The Dickinson County Fair 100 Late Model feature, run in memory of Bob Iverson, got off to a bumpy start with three cautions in the first 10 laps, a 35-lap run would ensue before the next yellow flew.

Lindsley, who took quick time earlier in the day, showed his speed by taking the lead from Cory Cootware on lap 13, with Robby Iverson following through to second. Ryan Hood would soon grab the second spot from Iverson just short of halfway.

Hood and Lindsley dueled for the lead, with Hood grabbing the spot on lap 56. With just over 20 laps remaining, the two came together exiting turn four, with Hood spinning off the nose of Lindsley.

Lindsley would tap out, taking blame for the incident, and fall to the rear of the field while Hood remained in the front, where he stayed through the end of the race to take the win and the $1,000 purse.

Robby Iverson crossed the line second while Mike D’Angelo followed in third. Cootware and Jason Wells rounded out the top five. Lindsley charged back to sixth in the final 20 laps to recover from his falling to the back.

Jake Dolfurd won a wild Fab Four Frenzy in the Four Cylinder class while Dean Bellmore edged Zach Gazda out in the title battle as those two butted heads in the final laps which ended with Gazda going sideways and Bellmore to the championship.

In the Super Stock Division Ryan Wender survived a caution-filled race to take both the feature and the 2020 championship. Wender had spun his car to the outside grass in turn one to avoid a four car pile-up early in the race. The move ultimately won him the race. Like Lindsley, the championship was Wender’s when he fired up his engine for the feature.

In the Ed Hedlund Memorial Feature for the stock cars, Travis Hulsizer took the checkered flag with Joey Pontbriand in a close second. Meanwhile, Preston Weddel held on to his points lead to take the division’s title.

The Norway Speedway’s 2020 season has officially come to a close, but organizers look forward to an exciting 2021 season.

Check out the speedway’s website at norwayspeedway.com for further information or email ostermannjohn@hotmail.com.