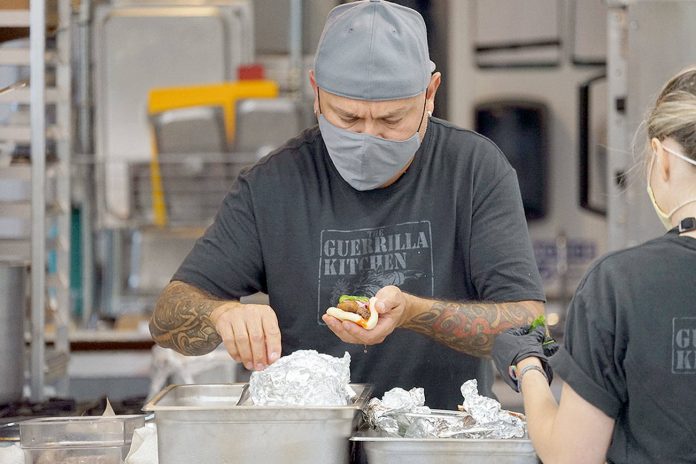 PORT TOWNSEND – Tucked away in an inconspicuous business park just off the beaten path that is upper Sims Way sits Port Townsend’s newest commercial kitchen and what is shaping up to be the city’s hot new lunch spot.

For the past three weeks, Lila’s Kitchen – complete with walk-up service windows and umbrella-adorned seating for 24 – has hosted the beloved local joint Mo-Chilli BBQ two days a week, allowing owner Mike Harbin to make regular use of his relatively new 325-gallon smoker.

Mike Harbin of Mo-Chilli BBQ cleans his 325-gallon smoker after a long day of barbecuing meats Thursday outside Lila’s Kitchen in Port Townsend. Harbin recently relocated the smoker, which he purchased last summer ahead of THING festival, from a friend’s field to the Lila’s Kitchen property where he and his team serve food through a walk-up window on Thursdays and Fridays. (Nicholas Johnson/Peninsula Daily News)

On Friday, Harbin and his team shared the still-shiny new kitchen space with Walter Zamora as he debuted his newest culinary venture – an all-scratch, locally sourced rotating menu showcasing street-food favorites from all corners of the globe dubbed The Guerrilla Kitchen.

“The foods we want to bring forth are things that are hard to find in this area, or at all,” Zamora said. “It’s inspired by food I’ve cooked for myself and have enjoyed in my travels. It’s street food, food for the people, using the highest-quality ingredients that are locally sourced without any preservatives or additives.”

On that first day, visitors to Lila’s Kitchen were treated not only to Harbin’s tried-and-true Texas-style brisket, ribs and other barbecue classics but also Zamora’s boerewors — a spicy, hand-stuffed South African-style sausage — as well as two kinds of bao, or steamed buns, filled with either pork belly or shiitake mushrooms.

“These food vendors are such positive folks and we’re really pleased to have them in the Lila’s Kitchen family,” said Wendy Davis, who along with her husband, Brent Davis of Brent Davis Construction, purchased the lot at 887 E. Park Ave. three years ago before starting construction on their multi-use building last year with design help from Simon Little of Little & Little Construction.

“There was definitely a need for another commercial kitchen in town,” she said, adding that the COVID-19 pandemic threatened to delay their progress. Fortunately they received permission from the state to continue since the project would support food services deemed essential.

“Given our new COVID reality, outdoor seating and this walk-up window concept have become critical to food-service businesses in town,” she said, “especially since there are virtually no events for food vendors to cater.”

About the time the Davises began construction last year, Harbin had been scoping out lots in the same business park to establish his own kitchen space. That’s when Wendy Davis reached out to him to see if he’d like to use the kitchen they already were creating.

“We had been running out of room over at the Market Kitchen on upper Sims Way,” Harbin said, noting that the 325-gallon smoker he’d purchased ahead of last summer’s THING festival had been spending a lot of time just sitting in a friend’s field, especially since the pandemic hit, and for the past five years he’d been storing his food truck at Sunny’s RV in Port Hadlock.

“This place allows us to park our truck and have our new smoker on site,” he said. “There are tables for sitting outside and there’s a restroom. This place was built to work in this new reality.”

This year, Mo-Chilli BBQ delayed its season with the food truck “because we didn’t want to add to the stress that other businesses were feeling,” Harbin said. Lately, however, he and his crew of about nine employees have been as busy as ever split between the new kitchen, Port Townsend Brewing and Taps at the Guardhouse on Thursdays, Fridays and Saturdays.

As for Zamora, the pandemic caused him to go from full-time to part-time cooking at Port Townsend Vineyards, which gave him time to pursue this new, more personal culinary project.

“It felt like the right time to create a food outlet that could flex and change,” he said of his new business, which is serving eclectic eats every Friday and Saturday from Lila’s Kitchen.

“This is just an incredible space. I have been working in the restaurant industry for many years, in crowded kitchens a quarter of the size of this kitchen, so even though we’ll be sharing the space and dancing around each other, I think we’ll make it work.”

Wendy Davis said she’s excited to bring in more vendors and explore the possibility of developing a sort of food-cart pod on the lot next door, which she and Brent Davis also own.

“We don’t want to overload that kitchen right away, but we do still have space to add more vendors over time, which could mean we add even more walk-up windows,” she said.

“And we are thinking of adding pods, or modified shipping containers, on the property next door that we could lease to food vendors.”

Across the street sits Discovery Bay Brewing, which opened in 2018 along with a short-lived food vendor. These days, the brewery serves its line-up of ales brewed on a two-barrel system from a window, along with sausages and other small bites, to patrons in the beer garden. It also offers growlers so people can take their beer home with them.

“We encourage outside food because we don’t have too much,” said co-owner Glenn Jansen, adding that he’s excited to have more food options spring up right across the street. “It’s an obvious no-brainer that this is all good stuff for us.”

With fall and winter on the way, Wendy Davis said she knows people will turn more and more to take-out rather than brave the often cold, wet weather.

“I think people might sit outside until it gets really uncomfortable,” she said. “We might bring out some heaters, but if the weather is really ugly, there’s not much we can do.”

In the coming year, she said she might try adding a fire pit or some kind of semi-permanent awning or cover. Whatever the future holds for Lila’s Kitchen and the vision of a food-cart pod next door, Wendy Davis is optimistic.

“There’s an energy up here that we’re just so pleased to be a part of,” she said, “and we’re excited about what this will eventually grow into.”

Katie Price cleans up mountain of rubbish in the garden of...

N. Korea continues to import metal into the country