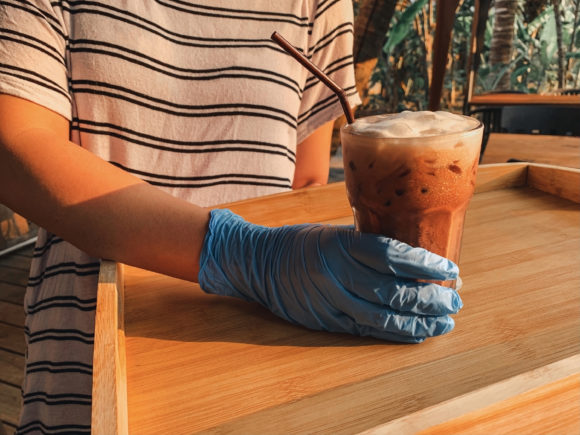 Before the coronavirus outbreak, furniture deliveries at Sunnyland Outdoor Living meant two employees sitting side-by-side in a truck. Now, one will be driving the truck while the second follows in a car.

And when Sunnyland’s workers reach a customer’s home, “we’ll deliver outside — we won’t go inside people’s houses,” says Brad Schweig, the retailer’s vice president for operations.

Employee safety is a priority as small and midsize businesses rehire laid-off employees and get back to work and many owners realize that supplying masks and gloves won’t be enough.

Many staffers are anxious about increased contact with others that could make them more vulnerable to catching the virus — feelings owners understand they need to consider. They’re staggering work hours and shifts to cut the number of people onsite. They’re also redoing floor plans and operations to minimize contact — a step that also helps keep customers safe.

Georgia has already allowed businesses like hair and nail salons, restaurants and gyms to open with social distancing restrictions. Alabama has allowed some limited openings, and Texas and Colorado permitted many companies to reopen on Friday. Around the country owners are recalling laid-off workers although they can’t resume full operations yet; with government loan money arriving, companies can pay their workers again.

The steps businesses are taking are in line with recent guidance from the Centers for Disease Control and Prevention.

“Some of it is common sense that we should have been doing long before this,” says Louise McCullough, who hopes to soon reopen her dog care company, Paws Chateau in Huntington Beach, California.

Before the virus struck, clients would walk their dogs into Paws Chateau and hand the leashes over to staffers. Now McCullough is creating a safe space where dogs will be unleashed by owners outside the building, and then staffers will wipe the dogs down with pet-safe antiseptic soap and take them inside.

Wolf’s Ridge Brewing, a restaurant and bar in Columbus, Ohio, is a large establishment, with three kitchens. Co-owner Bob Szuter is using all three even though his business right now is limited to takeout and delivery. On a busy Friday or Saturday night, this allows for just four to five staffers in each kitchen instead of the usual 15 or 20.

Szuter recalled about 25 staffers after the company received government loan money, bringing the work force to about 50. As he plans for how Wolf’s Ridge will operate safely when the state allows restaurants to resume table service, Szuter is including staffers in the process.

“It’s going to be a negotiation with them. We’re asking them, `hey, what do you guys feel comfortable doing?”’ Szuter says.

Atrend, an audio equipment manufacturer that’s now producing protective gear for health workers, has spread its 22 employees across its 50,000-foot warehouse in Chicago — they’re no longer working side by side. And while they used to take coffee and lunch breaks together, those traditions are on hold.

“They’re in the break room by themselves — their breaks are all staggered,” CEO Kevin Hundal says.

Staffers are also now getting more than a “good morning” as they arrive. Hundal is taking staffers’ temperatures, and if someone has a reading of 100.4 degrees or higher, he’ll send them home.

Monitoring employees’ symptoms, which can include taking temperatures, is something the CDC is encouraging employers to do. But as owners take on that new routine, they may find themselves dealing with confidentiality issues, says Hagood Tighe, a labor law attorney with Fisher Phillips in Columbia, South Carolina.

“If employers are doing that, they need to be doing it in such a way that an employee’s privacy is protected,” Tighe said. That means testing in a private area, something that may be difficult in a business with close quarters.

Staffers’ anxiety is as important a concern for owners as their physical safety. As Front Burner Group’s 20 Texas restaurants serve sit-down diners again, in addition to the masks and gloves employees will wear, one staffer will be sanitizing surfaces throughout the establishments — and wearing a white coat so everyone can see the disinfecting process.

CEO Randy DeWitt and his managers learned how anxious staffers are when they started recalling laid-off workers. Some don’t want to come back, including one with a child with respiratory problems.

“When we contacted people, I would say one out of 10 said, I’m too nervous,” DeWitt says.

Schweig, the Sunnyland Outdoor vice president, was himself nervous about one staffer who wanted to come back to work; she’s in her late 70s, the age group believed to be most vulnerable to the virus. Schweig told her he will pay her to stay home.

“It’s not worth risking her health to come back now,” he says.

Copyright 2020 Associated Press. All rights reserved. This material may not be published, broadcast, rewritten or redistributed.