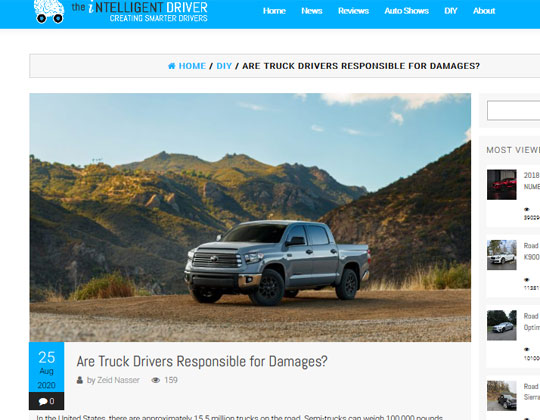 I get that my current level of what might be considered anything “intelligent” rolling around inside my melon is bathed in the blood of trucking. I’ve been immersed in many aspects of it for quite some time now. It feeds me and mine in every sense of the word.

That being said, I’m pretty sure I knew the difference between a commercial truck and a pick-up truck way before I ever knew much about professional truck drivers or anything having to do with commercial vehicles.

Maybe it’s because I grew up with one of my first memories being of an old Ford pick-’em-up truck with an “Eat More Possum” license plate proudly displayed on the front bumper. It sat in the driveway at Granny and Grandad’s house. Once a week, Grandad would drive the old pick-up down to the Western Auto to mill around before he headed over to Piggly Wiggly for groceries.

We called it a pick-up and knew the difference between it and a big truck. Grandad was not a “truck driver,” he was “Mr. Benton with the green Possum-Pick-’em-up”.

But apparently I’m ancient enough to fart dust, and this isn’t about me, as my editors gently remind me on a frequent-flyer basis.

On with today’s gift from the internet.

While diving into the daily Google-bots offers of what it considers trucking news, the headline teaser, “Are truck drivers responsible for damages?” caught my eye

The vague question was both maddening and intriguing.

“What kind of damages?” I pondered. So I clicked.

Lo and behold, it wasn’t the usual picture of a Euro truck with some insipid caption about “American trucking.”

It was a long, involved soliloquy that stank of an ambulance-chasing lawyer discussing the culpability of (commercial) “truck drivers” when they cause personal damage to people and property. But of course, since commercial trucks are looked upon by the unaffiliated as giant revenue-catchers, that was old news.

Here’s the part that inspired me to both levitate and bellow, “No they didn’t!” simultaneously.

The picture used with the headline is of a very dangerous-looking Toyota pickup truck. I’m pretty sure I saw tufts of baby bunny fur in the grille but I may have just been suffering from the shock of processing such a confusing compilation from a website that calls itself “The Intelligent Driver.”

You can’t make this stuff up, folks. I try every day.

Turns out, The Intelligent Driver has all kinds of fun and interesting articles to enhance your intelligence, like, “Seat covers that make your car awesome,” and “Questions to ask when borrowing money from your vehicle.”

No. That is not a typo. Apparently, Grandad could have asked the Possum Pick-’em-up to spot him a fiver to cover his Maxwell House instant coffee and Winston cigarettes for the week, but none of us were intelligent enough to ask it.

So this all may seem kind of petty, and it probably would be if there weren’t hundreds, and possibly thousands, of local (and sometimes national) news stories with headlines that fold, spindle and mutilate usage of the term “truck driver.”

“This just in. Truck driver spotted abducting kittens on the corner of Elm and Main Street. Local police are searching for the monster, who has also been reported to honk at old ladies in crosswalks and sunbathe nude in the bed of his 1979 Ford F-150. Be advised that this truck driver has arms, because he needs them to drive. Film at 11.”

We’ve all seen it. And I may be preaching to the choir here, but I guess it’s our job to educate these folks a little. Next time you see a news story with the words “truck driver” used outside of a commercial driver sense, give ’em a heads up.

And don’t forget to ask your Toyota 4 Runner for a loan.

Be safe out there, drivers. Remember – laughter is the best medicine.