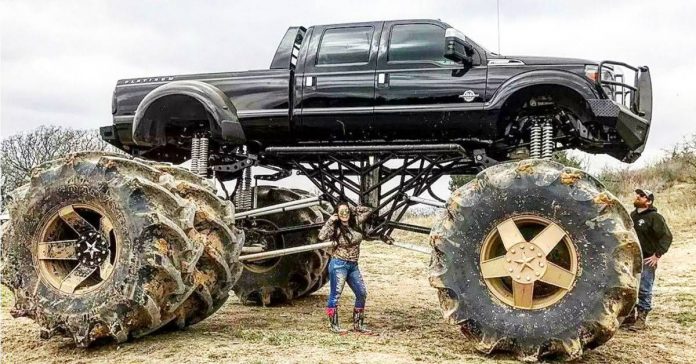 Among people that own and value their cars, it is common to have pride in their ride, in the same way that our clothes and style choices define us, the way we spruce up or modify our cars is an indication of the personality and preference of its driver. Choices abound in what we can do to our cars, performance and styling the primary ones, and from there, other options come into play, and while sedans and sports cars are normally modded, trucks also have their share of modifications

Some prefer their rides sporty, rugged or classy, while some don’t want to change the appearance and focus on what’s underneath the hood or what’s inside the cabin. They say that the sky is the limit on what you can do with your car, with only the question of money, as the main consideration on what can be done.

Unfortunately though, sometimes, even with a lot of spare change, not all modifications end up being good. As design or aesthetic choices vary for every individual, here are some examples that resulted in impractical, unsafe or illogical trucks, which can be best called How Not To Modify Your Pickup Truck.

While SUV’s and trucks were designed to provide higher ground clearance, some people have taken this concept to incredible heights. By adding another six feet of ground clearance, the truck as seen above make it difficult to see what’s going on at street level while driving, making this mod unsafe for both the driver and other cars in its vicinity.

Lambo/Scissor doors admittedly look cool, but when installed in a truck, the results are weird. Serving no practical or functional purpose, these fancy doors only add a “look at me” factor to a vehicle built for utilitarian use.

Changing the rims on a car is one of the simplest ways to improve its look, or in some cases, its handling characteristics. Considering the purpose behind a pickup truck, some rims don’t really mesh well. Putting in huge, shiny rims on a vehicle meant to carry loads of cargo or go off-road seems counterintuitive.

While style sensibilities differ across the world, the trend of installing Longhorn bull horns on trucks seems to be mostly an American southwest thing. While not a radical mod compared to other things done, the installation of a huge, sharp and pointy set of an animal body part not only seems odd, but can be considered dangerous to pedestrians that may be hit by it.

Mostly seen on Japanese cars in the tuner scene, bright underbody LED lighting has made its way to trucks as well. While lighting of this kind does look nice on sedans and sports cars, installing them on lumbering trucks looks both odd and impractical.

Tough, rugged and robust, adjectives normally used to describe the characteristics of a pickup truck. Meant to traverse both the street and the off beaten track, a truck covered in chrome foil basically defeats these attributes, as foil wrap can be easily torn or ripped, a truck garbed in this would need to be driven used with kid gloves.

Related: 19 Expensive SUV’s and Pickup Trucks That Were Modified…Badly

When a vehicle is released into the market, engineers have keen specifications set on all its parts. This specific set of tolerances and measures were made to ensure optimal performance and safety of the operation of the vehicle. Off setting wheels that add 50% width to the car is both unnecessary and dangerous.

While not meant to race or burn rubber as part of its performance envelope, most trucks come with respectable engine and transmission specs. This does not however necessitate  the addition of a spoiler, a performance part meant to provide downforce at high speeds, speeds that a truck would unlikely do, or need to do.

A good sound system is a must in any car. Having a decent infotainment setup normally comes standard, but some people tend to replace theirs with a better head unit, then add amplifiers LED screens and more speakers. Some people though, tend to go overboard and fill the whole truck bed with speakers, turning a once functional truck into a stereo on wheels.

Some accessories are meant to spruce up the look of a car, some add functionality and some seem superfluous. Truck bed rails seem out of place in a truck, owing to the fact that rails are supposed to function as load carriers, something already available in abundance in the truck bed itself.

There is a reason why the exhaust of vehicles are normally located underneath or at the rear. Modifying what was otherwise the most efficient and practical design of a truck’s exhaust is a truly bad idea for both health and environmental reasons.

Drivers given the choice and money would buy the best or top of the line version of their chosen ride. However, as not everyone has the financial resources to do so, people make do with what’s within the budget. This sometimes results in modifications (after market kits) that make the truck appear to be its more expensive sibling, sort of.

Karlo grew up watching Mcgyver back in the 90’s and grew up trying to be a Mr. Fixit, Jack of All Trades. A fan of cars and bikes, and most anything with an engine, he divides his time between work and family. A Leading Business Development, Project Manager in the Auction and Liquidation industry, as well as being a consultant for various local and national government offices in the Philippines. When not at work, Karlo spends his time at home, with family, either being the cook or fixit guy in his house.