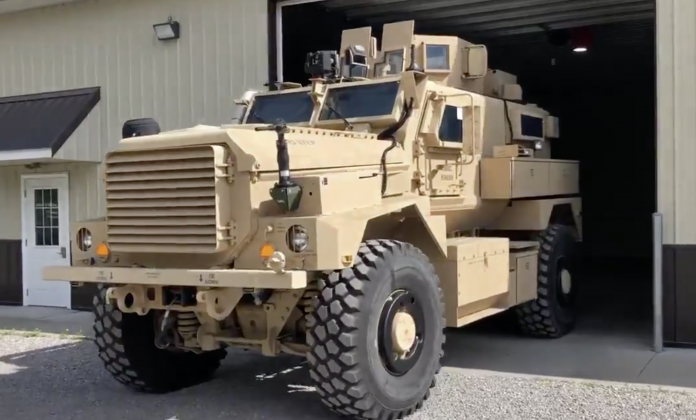 The police department in Moundsville, West Virginia — which has a population of fewer than 9,000 people, as of the latest US Census, and where violent crime is low — is one of the latest local law enforcement agencies to receive a hulking armoured military vehicle from the US Department of Defence.

Its new mine resistance ambush protection vehicle, or MRAP, could be used “for various things,” Moundsville Police Chief Tom Mitchell told The Intelligencer.

A video of the MRAP posted by a reporter with a local NBC affiliate went viral with dozens of comments asking why the town would need it at all.

Sharing the full story, not just the headlines

Its media rollout follows revived national debate over the role of militarised police departments seen charging at Black Lives Matter demonstrators across the US as American protest police brutality and the killings of black Americans. Officers have been outfitted in riot gear and gas masks and patrolling streets in armoured vehicles, equipment that most likely came from the US military.

Chief Mitchell, who oversees a department of 19 officers, said he received the MRAP “at no cost”, and one reporter said the department received it “for free” — though that doesn’t account for thousands of dollars in maintenance, gas and other related costs for the vehicle’s upkeep, not to mention the initial cost of the vehicle’s construction and purchase by the federal government in the first place, at taxpayers’ expense.

Since 1997, the Defence Department has transferred billions of dollars in surplus military equipment to more than 8,000 local law enforcement departments though the Pentagon’s 1033 program.

That includes clothing and office supplies as well as weapons, ammunition and armoured vehicles. In 2019 alone, the military transferred $293 million in equipment and supplies to local police, according to the Defence Logistics Agency. The agency notes that “only 5 per cent are small arms and less than 1 per cent are tactical vehicles,” which is $17 million worth of equipment.

West Virginia obtained more than 500 weapons and dozens of other pieces of military equipment through the program since 2006, according to West Virginia Public Broadcasting.

The controversial program was under scrutiny in 2014 during protests and unrest in Ferguson, Missouri after a white police officer fatally shot 18-year-old black resident Michael Brown.

Militarised police descended on the city and demonstrators, and former president Barack Obama had scaled back the programme by placing battlefield equipment on a “controlled equipment list” to limit the kinds of equipment local police could apply for.

A New York Times investigation in 2014 mapped the distribution of American military equipment across the US, illustrating its ubiquity in American policing.

“We’ve seen how militarised gear can sometimes give people a feeling like there’s an occupying force, as opposed to a force that’s part of the community that’s protecting them and serving them,” Obama said in 2015.

“It can alienate and intimidate local residents, and send the wrong message. So we’re going to prohibit some equipment made for the battlefield that is not appropriate for local police departments.”

“Weapons of war don’t belong in our local police departments and should never be used against the American people,” said Hawaii Senator Brian Schatz.

The 4 best food trucks in Orlando

Rebel Galaxy Outlaw Out On Nintendo Switch Next Week

GRAPHIC-May flowers: Where the U.S. retail blooms are and are not