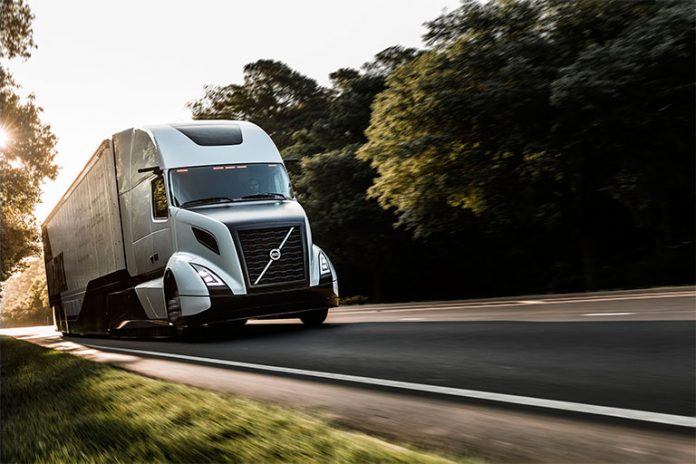 When most businesspeople travel for their jobs, they retire to their hotel room at the end of the day. However, when long-haul truck drivers are finished with their work, they move to the back of their truck cab into what is called the sleeper compartment.

Long-haul, over-the-road truck drivers typically are out on the road anywhere from one to three weeks at a time, delivering the goods we need for our daily lives. Most drivers spend their off-duty time in the sleeper compartments of their trucks, sometimes keeping the truck idling to get power and to cool or heat their space. This idling creates a significant amount of increased emissions, noise and wear on the main engine.

Providing an acceptable environment to rest and work is critical. Most important, drivers need access to heating and cooling for their comfort and health. In addition, there is the need for electric power for entertainment, completion of necessary work-related paperwork, cooking, etc. While all these so called “hotel” loads consume energy, the biggest energy draw has been the vehicle’s air conditioning system.

Historically, drivers’ power needs were supplied by idling their vehicles’ 400 plus horsepower engine. It was common for trucks to have 50 percent idle time during the summer, meaning if they drove for 11 hours, the truck would idle for 11 hours while the driver was not driving. That amounts to over 2,000 hours per year of non-driving idling, which is costly and loud and generates emissions, and which can nearly completely be removed.

The trucking industry has made amazing progress in lowering emissions from these hoteling loads and today long-haul trucks typically have a small unit known as a battery HVAC or electric auxiliary power unit (APU) installed either at the factory when the truck is produced or added later once the fleet takes ownership of the vehicle.

These battery-powered units have allowed fleets to significantly reduce their idle time. However, as the effects of climate change have caused higher temperatures, the battery HVAC systems are not powerful enough for long amounts of time. These systems have enough power to make it through a driver’s mandated 30-minute rest break after up to 11 hours of driving. However, they often can’t make it through the 10 consecutive hours of off-duty time mandated after 11 hours of driving.

Battery-powered units have allowed fleets to significantly reduce idle time. But as the effects of climate change cause higher temperatures, the battery HVAC systems are not powerful enough for long amounts of time.

Even more, the systems usually can’t make it through the 34-hour reset mandated in the Federal Motor Carrier Safety Administrations Hours of Service regulations for commercial vehicle drivers after a number of consecutive driving days.

The battery HVAC system gets charged while the vehicle is moving down the road. In some cases, fleet terminals or truck stops have shorepower plugs that allow the truck’s HVAC system to run off electricity. But not enough of these options are available, so drivers can’t always rely on their battery HVAC systems to keep them cool. The addition of solar panels to these trucks helps keep the HVAC batteries charged without producing any greenhouse gas emissions in the process.

Let’s have a quick look at the savings such a system delivers. For a single week of resting in the sleeper during the summertime, a heavy-duty truck idling 50 percent of the time would burn about 19 gallons of diesel, producing 420 pounds of carbon dioxide.

Compare this to burning around two gallons of diesel using a battery HVAC system augmented with solar panels. About 1 million such tractor-trailers are in North America, and given that only 10 percent of current sleepers use these systems today, the industry could save 1.7 million gallons of diesel fuel and reduce CO2 emissions by 19,000 tons each summer week. (See below for a real-life example with a driver using this system.)

While in theory the benefits of using solar panels to power battery HVAC systems sound ideal, having firsthand feedback from a fleet that has deployed this technology provides deeper insights into the real-world performance.

Clark Reed, a driver with Nussbaum Transportation, is one of the most energy-efficient drivers on the road today and also participated in NACFE’s Run on Less 2017 fuel efficiency demonstration. During a three-week period in 2017, seven drivers operating trucks specified with commercially available technology demonstrated that 10.1 miles per gallon (mpg) was possible hauling real freight in real world applications. The national average at the time of the run was 6.4 mpg.

Using a solar-powered HVAC system, Reed said he was able to get through his 10-hour breaks with zero idling and the 34-hour reset break with little to no idling depending on weather conditions and the amount of hotel load he required. “My idle time is right at 1 percent now, and I am out for weeks at a time, which requires multiple resets [34-hour breaks from driving] on the road,” he said.

Reed also said the system allows him to stay comfortable while his truck is being loaded or unloaded at customer locations where idling is not allowed.

In addition to the cooling benefits, Reed found some additional value from the system. “The system is quiet,” he said. “There is no motor droning on or turning on and off in the middle of the night [as happens in other idle reduction solutions]. It helps me get better sleep, not just because of the comfort, but also because of its almost silent operation.”

There are also benefits for those around Reed. “The unit does not blow smoke and fumes into the truck parked next to me,” he noted. “The air conditioning system is completely clean running, with the only exhaust being from the heater when it is needed.”

A cleaner future for trucks

Solar panels on trucks with battery HVAC systems keep drivers cool and help them manage their hotel loads with less fuel use and reduced greenhouse gas emissions. Infrastructure development could increase adoption of solar powered truck HVACs, if there were more plugs at places where drivers stop.

Given that the electric grid is becoming cleaner because of the increased use of wind and solar, these systems can become even cleaner in the future. Existing and emerging technologies are making trucking fleets more efficient and cleaner than ever, while the trucking industry keeps supplying us with the essential goods we need every day.